Phoenix Sky Harbor International Airport has been recognised by the Airport Council International’s Airport Carbon Accreditation Program and is currently the only airport in the U.S. to achieve the ‘Transformation’ certification. 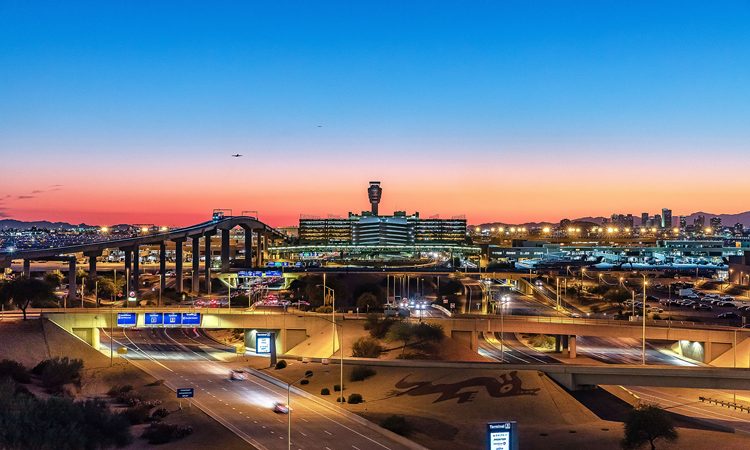 Phoenix Sky Harbor International Airport’s (PHX) has further committed to being future friendly and an industry leader in sustainability and has been recently recognised by the Airport Council International’s (ACI) Airport Carbon Accreditation Program (ACA). Phoenix Sky Harbor received the Level 4 ‘Transformation’ rating for reporting year 2021. Phoenix Sky Harbor is currently the only airport in the U.S. to have achieved the Transformation certification, and only one of three airports in the U.S to have achieved the Level 4/4+ rating tier.

“A powerful economic engine and one of the busiest airports in the nation, Phoenix Sky Harbor is proving that integrating sustainability can be cost-effective and improve the customer experience,” said Phoenix Mayor, Kate Gallego. “Through innovative heat mitigation, water conservation, and decarbonisation solutions, Phoenix Sky Harbor sets an example for airports across our country and around the world and gets us closer to our vision to make Phoenix the most sustainable desert city in the world.”

This esteemed accreditation recognises transformation of operations from the airport and its business partners to achieve absolute emissions reductions. Phoenix Sky Harbor International Airport received ACA certification for the first time in 2016 (for calendar years 2014 and 2015) at Level 2 ‘Reduction’ and moved to Level 3 ‘Optimisation’ for reporting year 2019. 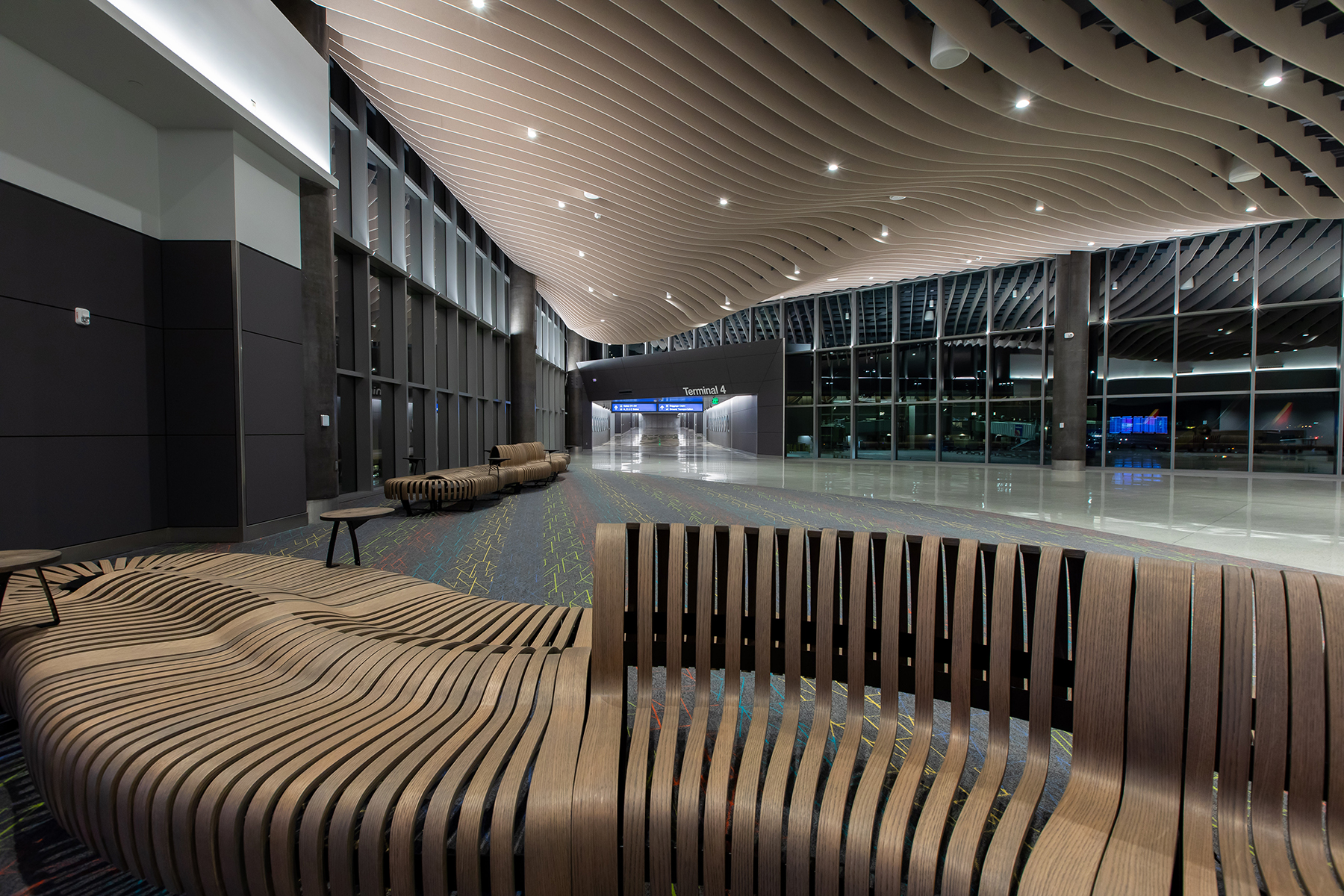 The Eighth Concourse was developed with a relentless focus reducing environmental impacts from the early planning stages throughout the design and construction lifecycle.  From a ceiling comprised of recycled plastic bottles to walls incorporating sustainable paper atop recycled concrete, the Eighth Concourse exudes innovative and bold sustainable solutions. The concourse includes 14,000 sqr-ft of ‘smart’ windows that instantaneously tint to improve the built environment and enhance customer experience while reducing peak energy loads by as much as 20 per cent. It also features a cooling system that recycles and saves water, charging stations for electric ground service vehicles, and thousands of LED lights and water-efficient fixtures.

Both of these awards recognise the airports continued focus to supporting the City’s Climate Action Plan and its own Sustainability Management Plan. In fact, the additional requirements for the upgraded Level 4 accreditation included developing an expanded carbon footprint report that inventories airport-controlled emissions sources as well as sources from third parties including tenants, airlines and passengers. The report, A Roadmap to Net Zero Carbon, outlines how Phoenix Sky Harbor will continue to lead through their pledge to reaching net zero carbon emissions by 2040; only 18 years from today, and a decade ahead of global and industry goals. 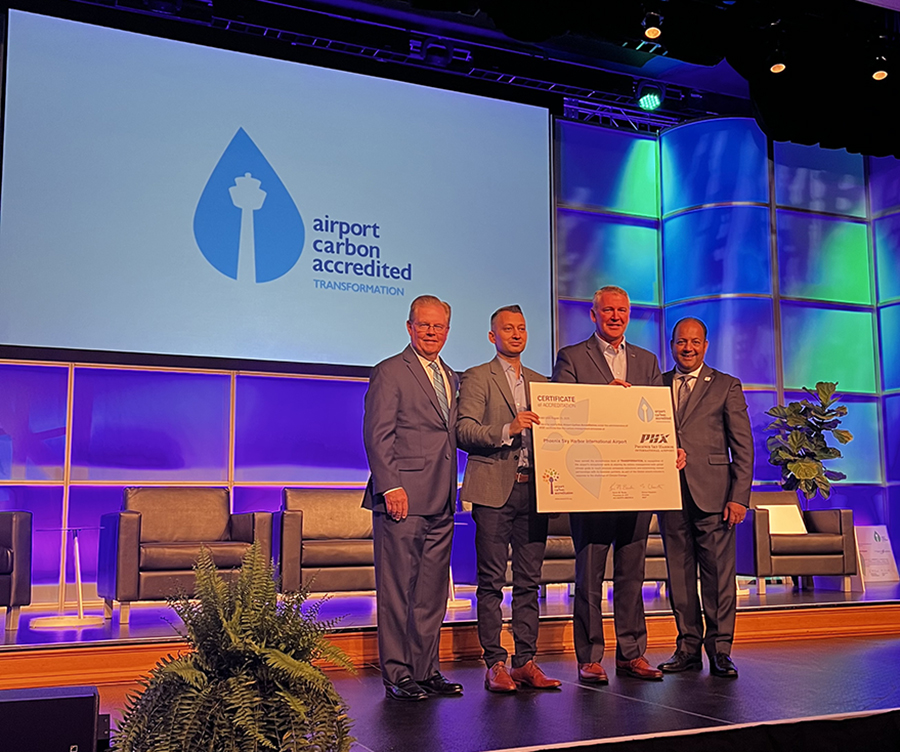 Since 2010, Phoenix Sky Harbor has reduced annual carbon emissions 34 per cent through energy conservation measures (ECMs) and on-site renewable energy and other initiatives despite growth and expansion. Some examples include reducing water usage by more than 43 million gallons a year, even with an increase in passengers served; reducing electricity usage by 17 per cent and greenhouse gas emissions by 25 per cent, and focusing on solar power by adding panels at our Rental Car Center, East Economy Parking areas and most recently at the Aviation Headquarters Building. Additionally, the airport has increased its recycling rates of more than 40 per cent and has implemented innovative waste reduction strategies such as asphalt and concrete recycling into new pavements.

“We are committed to focusing on being future friendly,” said Director of Aviation Services, Chad Makovsky. “Our commitment requires an all-hands-on-deck approach – from airport staff and business partners to our valued passengers and the surrounding community. We are already working together to reduce our impact to the environment and have made great strides, but I look forward to continued collaboration and innovation.”