As a result of the COVID-19 pandemic, London City Airport will temporarily pause its development programme at the end of 2020. 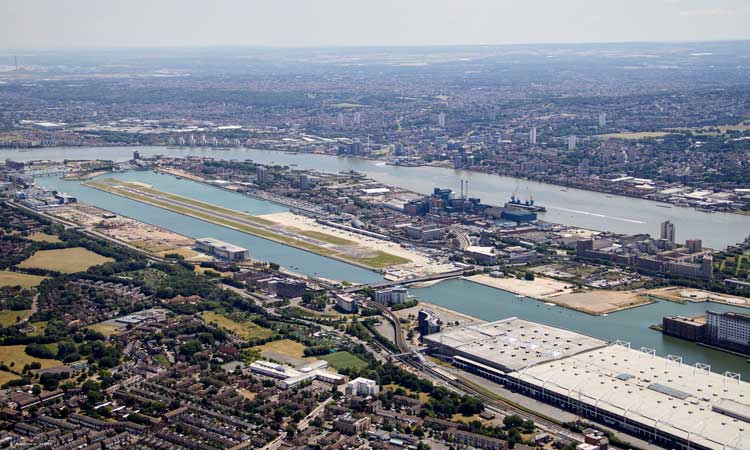 London City Airport (LCY) has provided an update on its City Airport Development Programme (CADP), including a decision to temporarily pause the development at the end of 2020 upon completion of new aircraft stands, a full-length parallel taxiway and new passenger facilities.

At the height of the COVID-19 crisis, the airport took the decision to suspend commercial flights before re-opening on 21 June 2020. During that period, the airport worked with contractors to adapt working methods to meet new health and safety standards and made significant progress with crucial elements of the scheme.

By the end of 2020, the airport will have completed a number of projects to deliver significant new airside infrastructure and capacity. This includes eight new aircraft stands, capable of accommodating the new generation of cleaner, more sustainable aircraft – such as the Airbus A220 and the Embraer E2-190 – along with a full length parallel taxiway, providing the ability to allow 45 aircraft movements per hour, when demand returns.

More immediately, at the start of September 2020, a new immigration facility will be opened to passengers. This will include 10 new e-gates, further improving the airport’s ability to offer the fastest passenger proposition in London. Furthermore, construction of a new baggage facility with increased capacity and resilience, featuring the latest security screening technology, will be operational in the summer of 2021.

While there has been a return to flying recently, the recovery of the UK aviation market from COVID-19 has been slower than expected, with demand well below normal levels, including at London City, where passenger volumes will be well down on the record breaking 5.1 million passengers who used the airport in 2019. Furthermore, it has become clearer that the recovery to previous levels will take longer than initially expected.

It is in this context that the airport has decided to re-evaluate the timing of the next phases of the development programme, including the new terminal extension.

CEO of London City Airport, Robert Sinclair, said: “Given our location in the heart of London, and the resilient nature of aviation, the airport and our shareholders remain very confident about the long-term prospects of London City and the vital role we can play in re-connecting London and the British economy as we recover from the shock of COVID-19. For the time being, we have taken the decision to focus our attention on delivering the vital additional airfield infrastructure which will provide our existing and prospective airline customers with the potential to bring new generation aircraft to this airport in greater numbers, which will be a crucial aspect of how we build a better, more sustainable airport.”

He continued: “Completing the terminal extension and new east pier very much remains part of our future and, with the foundations for both in place, we stand ready to take those projects forward when demand returns. In the months ahead, we will work with airlines and government to help restore confidence to the UK aviation market and we will continue to support our local authority and our communities as they plan for life beyond the crisis.”