Robert Sinclair, CEO of London City Airport, focuses on creating capacity for airlines, a high-quality passenger experience and an airport that Londoners are proud of. 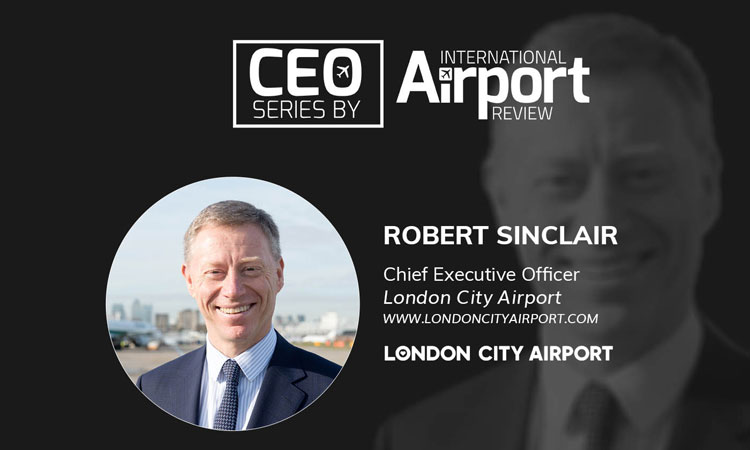 Originally, I wanted to be a pilot. Sadly, I was turned away from the air force in New Zealand as I didn’t have 20/20 vision. Instead, I took to the air to further my career elsewhere, practising law in Hong Kong, New York and London. I subsequently moved back to New Zealand to start a family and became Head of Investment Banking at UBS. Fortunately, Auckland Airport was a client and, in 2005, they recruited me to become Chief Financial Officer. But, in 2008, we wanted to give our sons the chance to see the world that my wife and I had enjoyed. So, we sold up and moved back to the UK, with recruiters assuring me that I’d get a job quickly, but my timing wasn’t great as the Global Financial Crisis hit just as we arrived. Fortunately, I was approached to be Bristol Airport’s CEO. It was a fantastic time and a great team and I spent nine very enjoyable years at Bristol, before accepting the challenge at London City Airport.

One of the most rewarding parts of being CEO of London City Airport is seeing the positive difference the organisation can make in East London, which is still one of the most deprived parts of the UK. The airport has a long-established track record of empowering its communities. We are giving people skills and life-long careers in the greatest industry in the world. While the airport is 32 years old, we have local people who have chalked up more than 20 years’ service and all the staff here are fantastic, going above and beyond to deliver our passengers a great service – it’s wonderful to see. Of course, it is also rewarding to be leading the world’s best airport for its size. I’m proud to be leading a business that gives millions of passengers each year from around the world a great first and last impression of London.

Aside from the weather, my biggest challenge is running a growing, complex operational business with very serious commitments like security and safety, side-by-side with our £500 million City Airport Development Programme.

Can you give us an overview of the three most exciting developments currently happening at London City Airport?

There’s a great deal of exciting developments underway and planned at London City Airport. Our focus is about creating capacity for airlines, a great experience for passengers and an airport that Londoners can be proud of.

Anyone visiting the airport will see our most significant development – the City Airport Development Programme, a £500 million investment that will turn water into land so that we can accommodate more passengers, more new-generation aircraft and maximise the potential of our runway.

During 2020, we will launch our state-of-the-art digital control tower, making us the first major airport in Europe to operate this way. Developed in partnership with Saab Digital Air Traffic Solutions and NATS, the newly constructed tower uses 360° HD cameras and sensors to provide a live feed of information to a new NATS control room in Swanwick, Hampshire. This multi-million-pound investment in technology will help the airport achieve significant efficiencies and improvements.

In addition to this, we expect to certify the Embraer E2, which will pave the way for a new generation of aircraft operating at the airport – a crucial step toward realising our ambition to have 75 per cent new generation aircraft by 2035 and fundamental to our sustainability commitments.

What is the biggest challenge London City Airport is having to tackle?

Challenging the perception that we are just a business airport. Don’t get me wrong, business traffic is really important to our current and future operations, but London is changing. We want to appeal to everyone, so they can experience our market-leading passenger experience, whether they’re going for a meeting in Frankfurt, a school trip to Berlin or a long weekend in London.

Perceptions are changing. We already have a 50/50 mix of business and leisure passengers. Perhaps more importantly, we are seeing many more local people using the airport, in 2018 143,000 departing passengers lived within a three-mile radius of the airport.

Of course, a major challenge right at the top of many people’s agenda is making aviation more sustainable. We are working hard on this, both independently and with partners like airlines, manufacturers and NATS to create an ecosystem that will drive forward change in our industry. We have reduced the emissions that are within our control at London City Airport by 30 per cent over five years. As well as taking action, we need to communicate this to the public and our stakeholders so that they understand that London City Airport is taking this very seriously.

The public awareness of climate change and resulting emphasis on sustainability is demanding the industry to go further and innovate faster. Aligned to sustainability, there are technological advances which appear to be just around the corner that should change aviation. Hybrid power systems, cleaner fuels and even electric-powered aircraft are being developed. British Airways is creating the first commercial waste-to-fuel plant in Europe and will be the first UK airline to offset carbon emissions for domestic flights. Our ambition at London City Airport is to provide a testbed for hybrid and electric aircraft, particularly given our urban location, the size of the aircraft that operate at London City and the short-haul nature of our flights.

It’s important that the industry shows the public and stakeholders that we are taking sustainability, environmental and climate issues seriously, and that we can make progress without the burden of additional regulation.

I think the answer has two parts. First, the industry needs to collaborate more closely than ever before. This needs to happen between peers that haven’t necessarily worked together very often in the past. Airports, airlines, manufacturers, air traffic control, regulators and all the rest need to work on fleet renewal, new power systems, future-proofed infrastructure, more efficient airspace and much more.

Secondly, we need to communicate our purpose better. Not simply pushing our vision for the future, but explaining the value of what we are doing now. We need to demonstrate the positive impact aviation has for people, communities, businesses, economies and entire countries. Airports are not just concrete and steel. Airlines are not just planes. This industry provides the ways and means for people to lead better lives. Through skills, employment and careers. Through investment in places and technology, by connecting people, making it possible to travel for business and pleasure.

The future will undoubtedly be more sustainable. In the relatively near term, I think we will see a dramatic shift to more sustainable fuels and hybrid propulsion. Fully electric-powered aircraft will also take to the skies.

For passengers, the experience will be more seamless and personalised, enabled by technologies like biometric identification. Continued automation and increasingly intelligent systems will make operations more efficient. Despite some significant pressures, I am optimistic that the sector will continue to grow.

In all of this, there is a golden opportunity for the UK to take the lead. Our aerospace industry is world-leading and has been for over a century. We have some of the world’s best educational institutions, and the UK has led the way with climate change commitments. If the industry can collaborate successfully and demonstrate its value more effectively, I believe the UK can shape the future of the aviation industry for the rest of the world.

Robert Sinclair joined London City Airport as Chief Executive Officer in October 2017, bringing a broad range of airport management and general business experience with him to the role. Prior to his role at London City Airport, Sinclair was CEO of Bristol Airport for nine years between 2008 and 2017. Prior to his role at Bristol Airport, Sinclair was Chief Financial Officer at Auckland Airport with responsibility for the finance, strategy, corporate affairs and IT divisions at New Zealand’s international gateway airport. Sinclair is a qualified lawyer and chartered accountant. He is a Board member of the Airport Operator’s Association, the UK’s airport trade association, and Airport’s Council International Europe, Europe’s airport trade association.

Zurich Airport to undertake construction work on runways and taxiways