Anders Nielson and Lone Teist detail how Billund Airport – regional in size but one that bears the complexity of a large-scale airport – has had to embrace self-service technology and automation within baggage handling to increase its capacity. 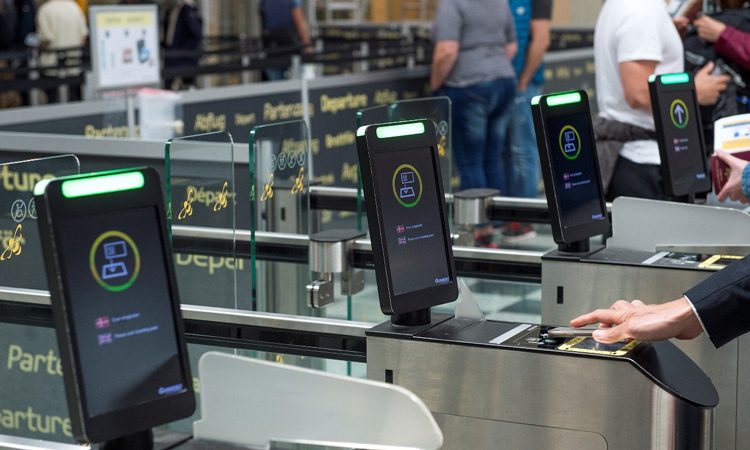 Billund Airport is a regional airport located in the western part of Denmark. With 3.5 million passengers per year it is the second largest airport in the country.

Although the airport is regional in size, it bears the complexity of larger-scale airports. With multiple network airlines such as KLM, Lufthansa, Air France, British Airways and Turkish Airlines operating, it is necessary for the airport to focus on individual passenger processes.

The current terminal was commissioned in 2002 and was, with the traffic composition of the time, calculated for 1,200 passengers per hour, with an associated annual capacity of 3.5 million passengers.

Over the next 10-15 years there are opportunities to adapt passenger processes, terminal buildings and civil works so that the terminal could manage up to 1,800 passengers per hour.

With traffic growing and growing, it is vital that the airport can support the increasing passenger figures. It must focus on optimising the flow of higher passenger figures within limited square metres and only one terminal.

Key to success is self service in a common user environment. But customer satisfaction must also be considered. Passengers like to have control over their processes and one of the benefits is that perceived waiting time can be reduced. 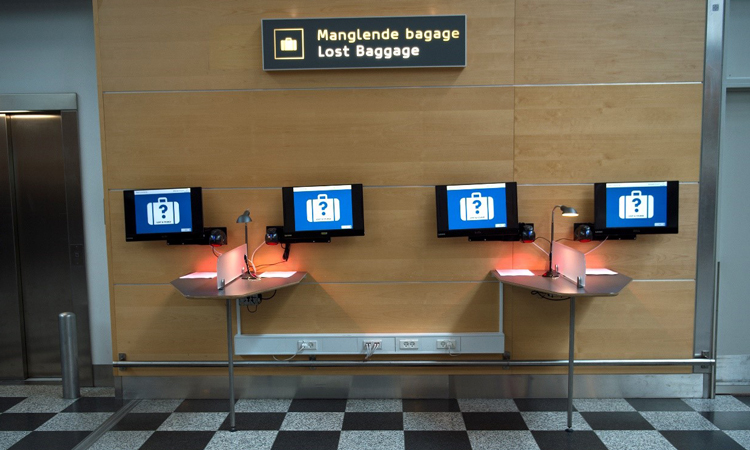 Within Billund Airport, it is not only at check-in that passengers are offered self service at kiosks. These kiosks are also present in the arrival hall for reporting missed bags. Kiosks were installed here in 2012 and it was seen from the beginning that passengers were successfully adapting to them.

Today more than 90 per cent of missed-bags reports are completed by the passengers themselves at kiosks.

The airport has four check-in lanes and a total of 18 kiosks are placed in front of row A/B and C/D so that passengers see them first when they arrive at the terminal.

Used for both charter and scheduled flights, the kiosks are part of the airport’s two-step solution to the self-service bag drops.

The self-service bag drop set-up is a retro-fit solution and Billund Airport has 13 of them. The set up accommodates both one-step and two-step solutions. After measuring the one-step process it was found a beginner takes approximately 45 seconds to print the tag at the self-service bag drop. The two-step solution takes approximately 15 seconds for a beginner as the passenger only has to scan and drop the bag (tagging has already been done before the passenger approaches the bag-drop point). 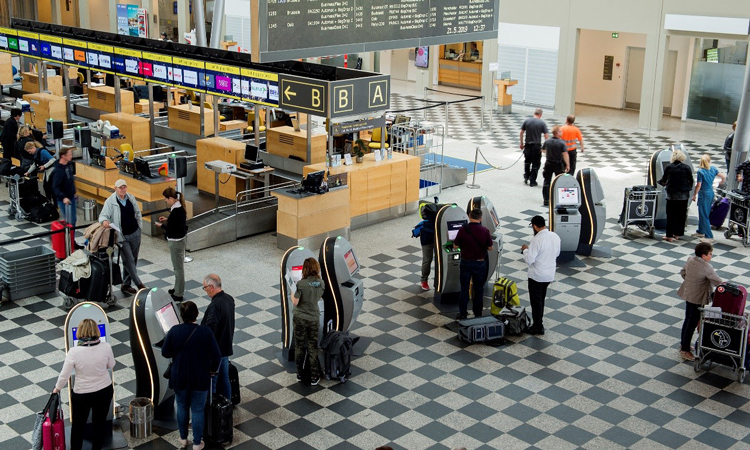 The different departure control systems are accessible via the bag drop and essential here is the common use environment: There are no dedicated counters nor barriers. All bag drops must have easy access, and signage in the area needs to be streamlined and kept to an absolute minimum.

Moving a little bit closer to airside, the airport have installed six pre-security gates in front of the security checkpoint.

Billund Airport have a software system reading the boarding passes at security. The software is then used by boarding gate agents in case they are missing passengers after boarding announcements have been made. The system registers when passengers have passed through the security check point and the information is kept in a database, so they can detect if the passenger is still landside.

Self service from check-in to boarding in a common use environment is a key element in order to save travellers time and deliver a great passenger experience.

At the gates, we have designed our future boarding gates with the passenger in mind. We have removed all visual noise and inserted clear signage. The airline request for separation of business/all other passengers we also had in mind. We have gone from the traditional lounge boarding to gate boarding, leaving more space available and the ability to meet the capacity demands in the future.

A special area was developed to expand the capacity of baggage handling. As in other airport buildings, baggage sorting is surrounded by other vital functions on all four sides – leaving limited opportunities for expansion. It is therefore quite difficult to extend the baggage sorting without causing costly and intrusive refurbishments and extensions. In Billund they have moved the entire handling of arriving baggage outside to the edge of the platform.

This means that in the future it will be possible to expand the facility for departing luggage, so it can handle 1,800 passengers per hour. At the same time, the expansion has resulted in its own significant reduction in the load on the ramp porters. In the case of baggage that is handled in the aircraft’s hold, the introduction of a bulk baggage handling system (BBHS) has resulted in an 80 per cent reduction in the number of kilograms carried by the ramp staff.