Despite renovation and expansion works having been carried out since the late ’90s, Kuwait International Airport still lacked the necessary facilities to accommodate its increasing number of passengers. Recognising a change was needed, in 2016 the airport embarked on an ambitious project to complete a new, passenger-focused and technology-driven terminal. Rafael Alonso, Senior Architect at AECOM, provides an overview. 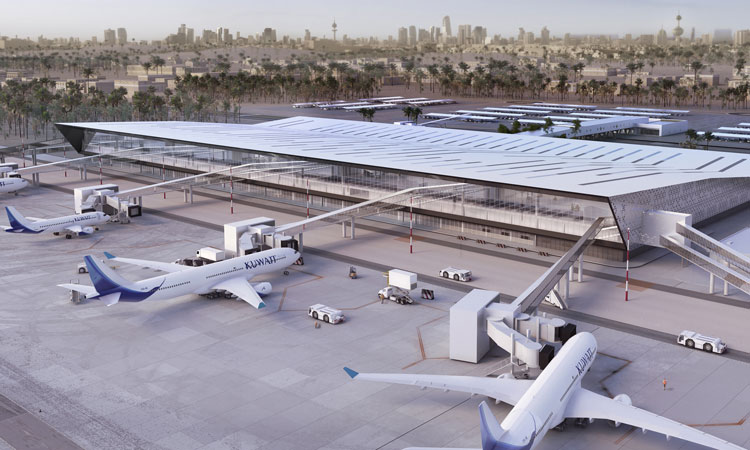 The State of Kuwait’s main airport terminal (T4) was designed in 1979 with an initial capacity of three million passengers. From 1999 to 2001 the airport went through a huge renovation and expansion transforming the existing parking area into a new and larger terminal area, adding new entrances and check-in zones along with new parking and shopping areas. However, back in 2016, the existing terminal exceeded its recommended capacity, with more than 13 million passengers using the facility. This increase of over 35 per cent of passengers in less than five years affected the passenger experience, airport workers and the image of the country.

The Directorate General of Civil Aviation (DGCA) of Kuwait decided to solve this problem with a project involving the design and construction of a completely new terminal building with the additional required infrastructure. This was to be executed in a record time of less than two years. The project was awarded to a Turkish/Kuwaiti joint venture – Cengiz and First Kuwaiti. AECOM, a premier, fully integrated global infrastructure firm, was appointed by the joint venture as design consultant and will deliver architecture, schematic MEP (mechanical, electrical and plumbing) and manufacturing coordination as part of its role. Terminal 4’s building is designed to accommodate 4.5 million passengers per year. It adheres to IATA’s 10th edition of ‘Overdesign’ Level of Service guidelines. It also meets the DGCA’s requirements for considering the projected annual and peak-hour forecasts, the terminal´s operations, security requirements, apron conﬁguration and aircraft type.

The requirements include a new 55,000m2 terminal building, with 14 gates, divided in two main levels; five bus gates on the ground ﬂoor and nine boarding bridge gates at the departure level. The departure level gates have one closed gate (code-C and code-E), two open gates (code-E) and three open gates with multiple aircraft receiving stands (MARS), as well as parking positions that allow for two planes. The usage of MARS provides operational ﬂexibility based on the airport’s operator future strategy.

The T4 development is a multifaceted project with a complex design/build scope. In addition to the terminal building, other infrastructure included in the project are the new staﬀ car park with 650 additional spaces, a new pedestrian bridge connecting the existing car park and the satellite building, six ancillary facilities supporting operations, and the associated access roads and utilities.

T4’s building design is based on achieving volume simplicity through architectural quality of the construction, solutions and materials, attention to detail and integration within the environment. The design strives to provide a pleasant and relaxing passenger experience.

The design and build challenges in the expected timeframe were only possible due to the usage of the latest design software and technologies and the continued coordination between all the companies involved in the project, from the designer to manufacturers and installers.

There were several key points that drove through the entire process to ensure its success:

An airport terminal building is the main gate for entry or departure of a country. It becomes the first and last experience of any Kuwaiti citizen or visitor, which is why the character of a country must be included in the design itself. The main objective of the building is to project a strong and iconic image that enhances the sense of arrival, welcoming everyone to Kuwait.

From the initial project stages, AECOM considered how to enhance the unique character of the building while the beauty of it is not neglected. Moreover, it has to be ensured that cost and time of completion are not compromised.

The design of the terminal building is referenced to the ‘Al Sadu’ Kuwaiti traditional pattern. This pattern was widely used by Kuwaiti nomads in the fabric of their tents, symbolising their origins and belonging while travelling in different areas of Middle East and Asia. The essence of the Al Sadu pattern was incorporated into several design features including the exterior façade panels, custom interior ceiling and custom wood wall panels, to deﬁne the distinct local image, celebrating the beauty of Kuwait’s traditions.

The Al Sadu weavings injected local tradition, ensuring every passenger could recognise the Kuwaiti culture in the building and distinguish it from other terminals.

The false ceiling is the most important element of the interior concept. The strong patterns of Al Sadu weavings are also the starting point for the design and help to define a clear and abstract image that ends as a tridimensional surface. The ceiling is also flexible depending on the different areas of the terminal. In the larger areas, such as duty free and check-in hall, the scale of the pattern is bigger. Similarly, the modules are smaller in smaller areas, such as open lounges, to fit with the proportion of space.

The technology used in the design has been essential for the completion of the project. Old design tools are no longer valid to design such a complex project with a limited timescale.

AECOM implemented building information modelling (BIM) technology – which uses a digital representation of physical and functional characteristics of a facility – in the design from the conceptual stage until the detail design stages. The 3D modelling coordination allowed teams from Spain, Turkey, Italy, the UK and Kuwait to work together in an efficient way where all the clashes can be detected in advance and solved prior to construction. Specific items which are usually custom-made for airports were coordinated from early in the design process, thanks to the implication of teams and the 3D modelling system. AECOM developed a software script to provide an analysis of the passenger flow, enabling them to study the waiting times at each step of the departure and arrivals process. This analysis became essential to provide the ‘Level of Service B’ requirements for IATA codes. With this information the terminal was designed with a clear and direct passenger circulation system, minimising turns and decision points and travel distances, as well as avoiding crossﬂows and conﬂicting passenger movements.

The unique diamond-shaped false ceiling was developed using parametrical software. This 3D design allowed the fire specialist to study the incline positions of the sprinklers to ensure the compliance of the fire suppression system with National Fire Protection Association (NFPA) codes. Similar design technology was used to define the north and south façade perforation pattern, which has the Al Sadu pattern incorporated. 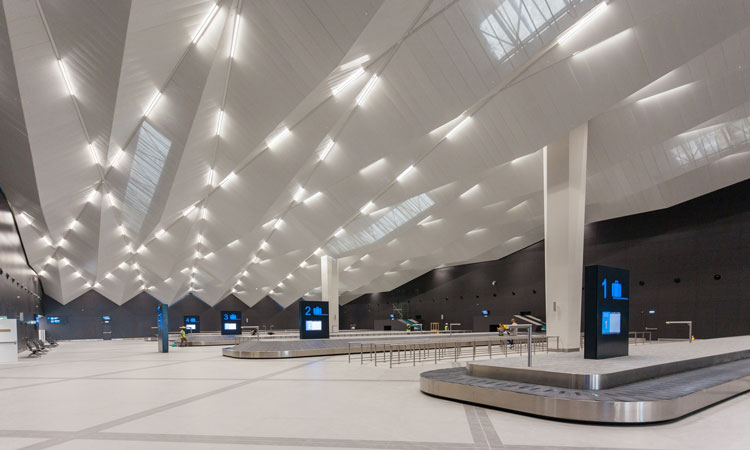 Time-cost efficiency in design and construction

The challenge for the team was to convert the fast track process into a ‘fast smart’ project; optimising construction activities, solving complex problems, developing innovative and flexible solutions, and delivering a state-of-the-art design. New technologies have enabled design sharing information to all teams.

To achieve the fast-track project in a smart way the design and construction process was divided according to the time requirements of completions, for example main structure, roof, building envelope interior, skywalk bridge, annex buildings and car park/ landscapes. The division of work and coordination of the different stages of the project were key.

Unique manufacturing elements were considered beside the main project and all the items analysed in the general 3D model. AECOM worked directly with appointed manufacturers to ensure there were no clashes between all the elements included in a project.

Special attention was required for the long lead term items (LLTI) of the project. Designing and building an airport includes multiple elements that require bringing custom-made manufacturing from different parts of the world. This can require extra time for parts to be manufactured, delivered and installed. In the T4 project, all the LLTI were detected, designed and frozen in the early stages of the project to ensure the fast-track will be achieved. This LLTI included manufacturing from all around the globe including a baggage handling system from Italy, MARS from Spain, and boarding bridges from Turkey. 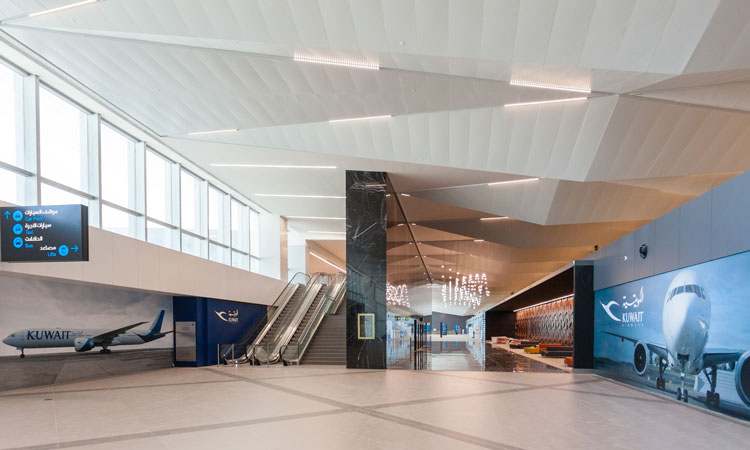 Both AECOM and Cengiz Insaat prioritise safety in all projects they deliver. Safety in design – including safety access to the roof, safe water tank access, registrable MEP items and safety life lines – were all successfully implemented in the project.

More than five million working hours have been required to complete Terminal 4 with a successful zero-incident ratio, including no lost time injury (LTI) incidents occurring during the construction due to safety control, procedures, review and safety risk mitigation.

There is no doubt that a complex airport design and construction project is not a simple task to complete, much less with an extremely limited schedule. However, the Kuwait T4 Terminal project demonstrates that it is achievable.

Rafael Alonso is Senior Architect at AECOM and was appointed Site Design Coordinator for the Terminal 4 project. With a multidisciplinary background and education, his expertise focused on the technical design of project with complex requirements such as aviation, healthcare, commercial and skyscrapers. 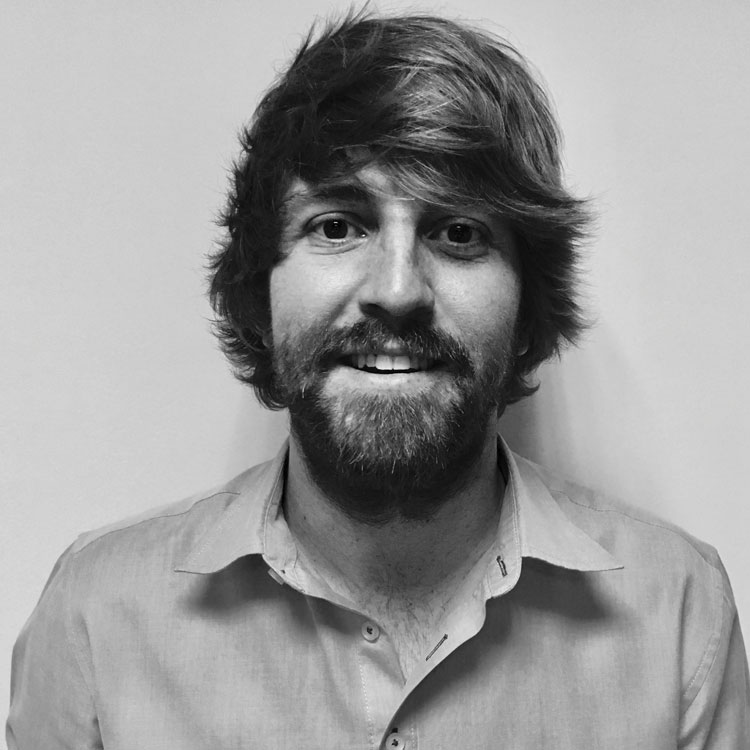