On 8 February 2021, Berlin Brandenburg Airport achieved a significant milestone – 100 days of operation. Jan-Peter Haack, spokesperson for BER Airport, discusses the airport’s first few months of operation and the challenges of opening a brand new airport in the middle of a pandemic. 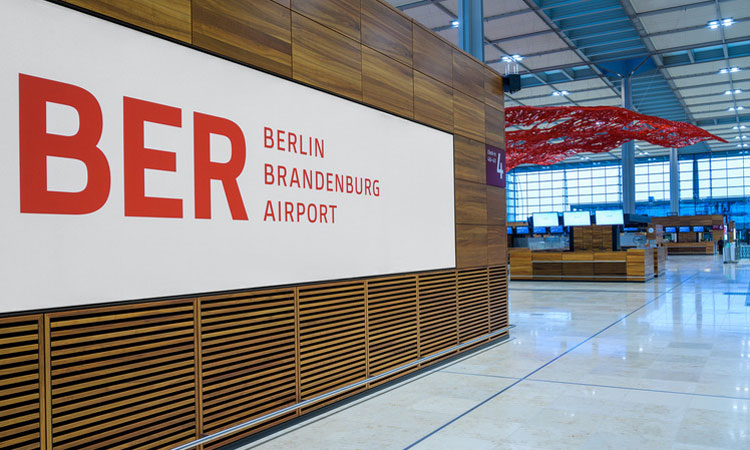 It was 31 October 2020 when Germany’s new airport for the capital region – Berlin Brandenburg Airport Willy Brandt (BER) – started its operations. With the inauguration of the new airport, the closing of Berlin-Tegel Airport (TXL) just eight days later and the renaming of the airport formerly known as Berlin-Schönefeld Airport (SXF) to BER Airport’s Terminal 5, on 25 October 2021, all of the region’s air traffic was concentrated at a single location: Berlin Brandenburg Airport Willy Brandt.

Still, before the doors of Terminal 1 opened, due to the coronavirus pandemic, amendments to meet the new hygiene requirements became necessary”

Still, before the doors of Terminal 1 – the heart of BER Airport – opened, due to the coronavirus pandemic, amendments to meet the new hygiene requirements became necessary. At all counters, screens were installed to keep employees separated from travellers, and disinfection dispensers were placed at every other corner. Posters and stickers, as well as digital screens, serve as reminders to keep physical distance from each other, and announcements from the speakers are frequently drawing attention to all of the new hygiene measures that are in place.

The opening of an airport during a pandemic is all but normal. The precautions taken to prevent the further spread of the virus will not let you forget about the unusual circumstances. Of course, the circulation of the virus set a limit on the planning for the opening event. However, an opulent celebration was not what the airport’s operating company had intended anyway. The maxim of 2020 was clear and simple: Just open the airport, without further ado. 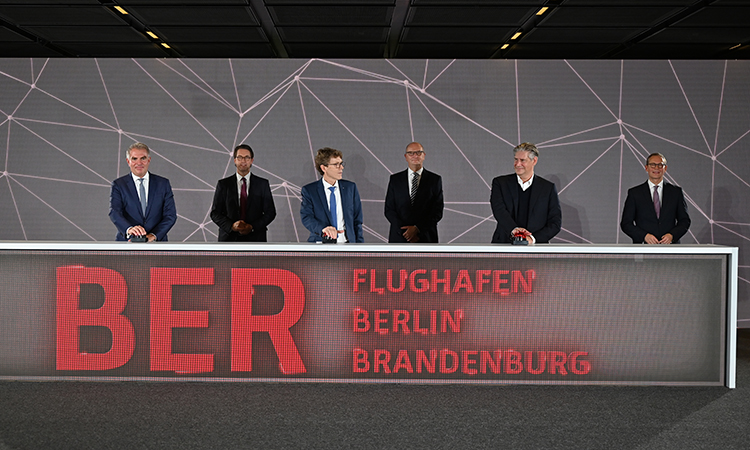 On 8 February 2021, after more than three months from the opening, the new airport of Germany’s capital region reached 100 days of operations. Despite the global situation, a lot has been accomplished in this period at BER Airport. However, the main influencing factor for air traffic around the globe is still COVID-19. The pandemic has shrunk passenger numbers dramatically and has kept people from exploring the world. That is the main reason why the airport’s CEO, Engelbert Lütke Daldrup, has mixed feelings regarding the first few months of operations when he expressed: “We opened the airport successfully and we are satisfied with its performance, although we wish that we would be able to welcome more travellers.”

During the first months of operations, the handling of air traffic at BER has been stable. The technical installations at the airport showed an outstanding level of availability”

So far, the airport is running successfully. During the first months of operations, the handling of air traffic at BER has been stable. The technical installations at the airport showed an outstanding level of availability. For example, one of the most remarkable technical devices of an airport, the baggage carousels, were available more than 99 per cent of the time during the first 100 days of operations, which is an exceptional ratio. Moreover, other technical parts of the infrastructure – such as docking systems, runway lighting, security systems and many more – fulfil their functions in a reliable matter. However, it is not only those technical aspects, which are measurable in numbers, that are leading to positive feedback from travellers and visitors of the airport. The huge majority perceive the more subjective components – such as its architectural features, the positive atmosphere and the open, bright, clean and user-friendly terminal – very well.

Back to basics at BER Airport

However, it is important to remember that, reduced to its core features, an airport is precisely a facility to handle passengers and operate runways for airplanes to take off and land. As such, the overall infrastructure of Berlin Brandenburg Willy Brandt Airport has been working reliably during the first 100 days of operations. Moreover, the main reason for people to visit an airport is their desire to reach the clouds and explore the world when traveling by airplane. Making the departure and arrival processes safe and stable are, therefore, most likely the factors that travellers have in mind when thinking about the quality of an airport. Key measures for those standards are the punctuality and the safety of air traffic. 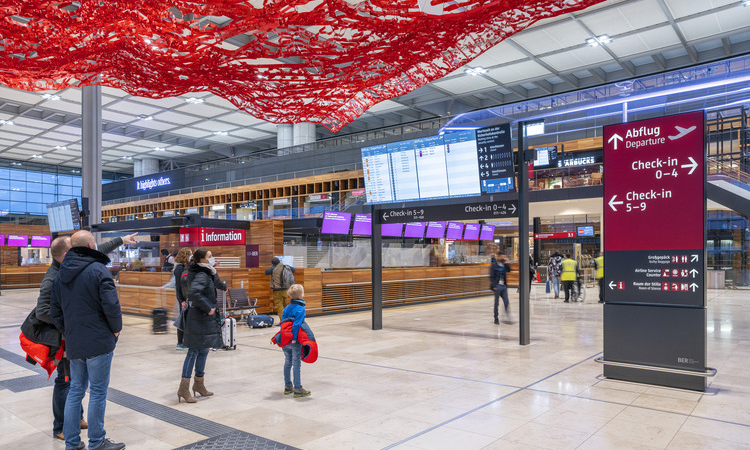 When it comes to delays, the numbers of BER Airport are already better than the numbers of the airports within the region over previous years and, therefore, the new airport has gone beyond expectations. Of course, during the coronavirus pandemic, the traffic is below its capacity. However, for the same reason, every delayed flight has a higher influence on the statistics than in times of major traffic volumes.

We are happy with how fast everyone adapted to the new environment, and we are facing less trouble than anticipated”

In addition, another challenge of airport operation is making sure that all staff – such as ground-handling companies, airlines and everyone else working on-site – has been able to become familiar with the new location. Therefore, it is understandable that Patrick Muller, Head of Operations at BER Airport, says proudly: “The team very quickly became familiar with the new surroundings, and work is going on hand-in-hand with our partners. We are happy with how fast everyone adapted to the new environment, and we are facing less trouble than anticipated.”

One major reason behind the smooth start is certainly the Operational Readiness and Airport Transfer (ORAT) test programme, which the airport’s operator – Flughafen Berlin Brandenburg GmbH – ran in summer 2020, when 10,000 volunteers tested the airport’s processes, already under the impact of COVID-19. However, the biggest challenge for the new airport, this far, has been winter. For several years, there has not been as much snow in Germany’s capital region as there was at the beginning of 2021. With an arctic wind and snowfall of up to 12cm a day, the operation of every single airplane was still as safe as always. De-icing airplanes and clearing the runways of snow, as well as aircraft taking off and landing under difficult weather conditions – at Berlin Brandenburg Willy Brandt Airport, operations remained safe and reliable. 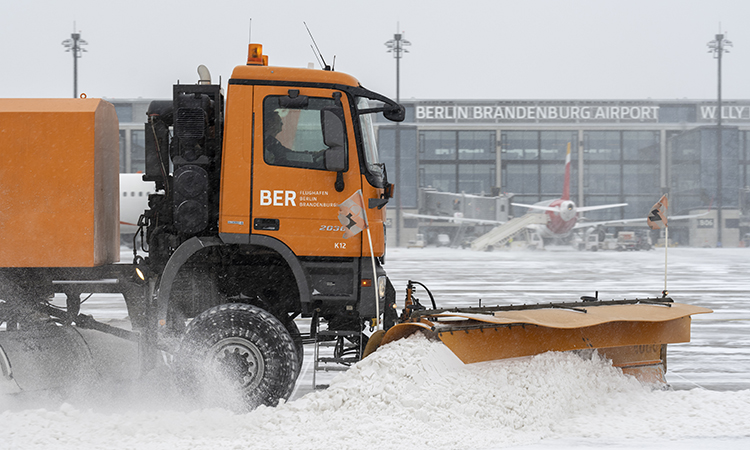 The impact of the COVID-19 pandemic

Like many other airports in Europe and around the world, BER Airport has had to temporarily close parts of its facilities”

After the successful start of BER Airport, Germany’s capital region could write a new success story of air traffic. However, the effects of the virus are not only limiting the number of travellers visiting the airport, but are also postponing the airport’s opportunity to prove its capability to run at full capacity. It also makes measures necessary that no one could have really imagined before. Like many other airports in Europe and around the world, BER Airport has had to temporarily close parts of its facilities. First, at the beginning of December 2020, the airport interrupted the operation of the southern runway. In addition, exactly on the 100th day of operation, on 8 February 2021, the first airline began to move its operation from Terminal 5 to Terminal 1. From 23 February 2021 onward, the operation of Terminal 5, formerly known as Berlin-Schönefeld Airport, has been interrupted for one year. This day shall not become part of history, as it is not supposed to be the day that Terminal 5 closed down, as the airport’s CEO points out when he says: “We have not pushed the stop button for Terminal 5, but, alternately, we have put it on pause. That is the reason why we do not say ‘goodbye’ or ‘thank you’, but instead we will keep it to a casual ‘see you later’.”

Concluding 100 days of operations at Germany’s new airport for the capital region, the wrap-up is an airport that is highly functional, but, due to COVID-19, poorly frequented”

Concluding 100 days of operations at Germany’s new airport for the capital region, the wrap-up is an airport that is highly functional, but, due to COVID-19, poorly frequented. For BER Airport, this is more unusual than for most destinations, as many voices warned that the dimensions of the airport were too small. Now, the existing infrastructure is not entirely used, and operations are partially interrupted. The hope remains that worldwide vaccination programmes will be successful and will allow travellers to go back to explore the world, meet their family abroad and learn from different cultures again soon. The new airport for Germany’s capital region, Berlin Brandenburg Willy Brandt, is awaiting the time after the pandemic, says its CEO, Engelbert Lütke Daldrup: “Once the virus is under control, we are ready to welcome more passengers and to operate under full capacity.”

Before becoming spokesperson for Berlin Brandenburg Airport Willy Brandt in December 2020, Jan-Peter Haack was the PR Manager for the airport from March 2020 up until his most recent appointment. Prior to this, he was the PR Manager for infrastructure projects at Deutsche Bahn (DB), a position which he held from the beginning of 2015.

Haack has a Master of Arts in Communication in Social and Economic Contexts from Universität der Künste Berlin and a Bachelor of Arts in Business Communication Management from Hochschule für Technik und Wirtschaft Berlin. 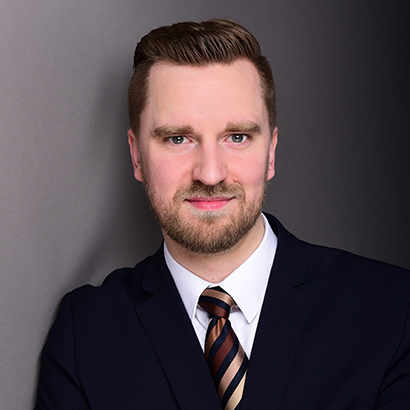