The Airport Community App introduced by Manchester Airports Group has been rolled out across all three of its airports. Nena Adrienne, Performance and Insights Manager at Manchester Airport, and Monika Simonaityte, Air Traffic Management (ATM) Strategy and Deployment Manager at London Stansted Airport, discuss the success of the app and how it has improved airport operations. 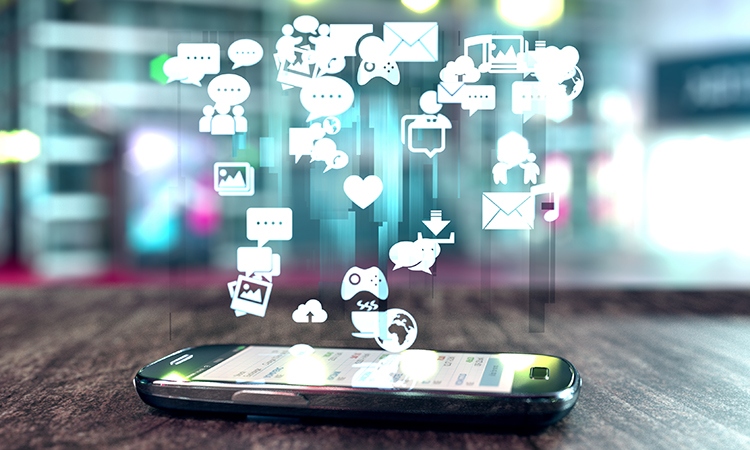 Manchester Airports Group (MAG) introduced the Airport Community App in 2019 and, since then, all three of its airports have benefited from its use. Combined, Manchester, London Stansted and East Midlands Airports are now seeing more than 20,000 users each day.

The app, which was developed by AirportLabs, was first launched at Gatwick Airport and has since been rolled out worldwide, including Heathrow, Dubai, Amsterdam, Brussels and other major international airports.

The Airport Community App has been well received at MAG’s airports for several reasons. Firstly, it is incredibly user-friendly and easy to update. It allows the whole airport to be kept informed about a range of events and issues by providing real-time data, such as on time performance, passenger figures and live flights, plus airfield and terminal status. It also incorporates weather updates to give a full operational view of each airport. Finally, it also helps to disseminate and share messages immediately during a crisis or incident, therefore ensuring that all stakeholders within the community are kept informed of unfolding events.

Monika Simonaityte, Product Owner of the app at London Stansted, said: “The Airport Community App has been introduced to serve our internal and external airport colleagues, including ground handlers, airline staff, retailers, police, security, airside operations and more. To further our extensive education credentials, we even granted access to London Stansted Airport College students, so that they can learn and understand more about airport operations.” 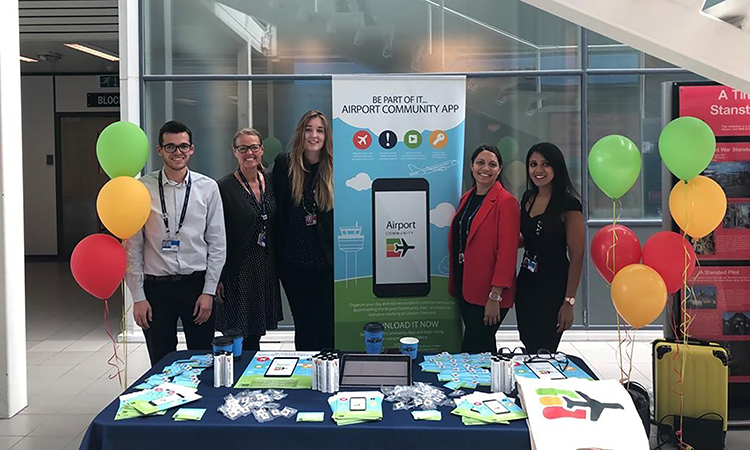 The team launching the app at London Stansted Airport.

Nena Adrienne, Product Owner of the app at Manchester Airport, has found the real-time element of the app to be the most advantageous element. It allows for instantaneous change and improvement within the operation, rather than having to wait post-incident to digest and read a report and then make changes afterwards. “We are continually looking for opportunities to add new features to the app that continues to encourage this behaviour,” said Nena.

The app can help to keep the airport campuses ahead of the game, by sharing live updates on a common platform, seen by all stakeholders at once”

“The app has definitely transformed the way we are working and interacting with each other across our three airports. Having a plethora of third parties and stakeholders can often lead to siloed operations. However, the app has greatly improved awareness and collaboration amongst everyone across each airport. The app can help to keep the airport campuses ahead of the game, by sharing live updates on a common platform, seen by all stakeholders at once. In turn, this reduces incoming queries and issues for our teams to deal with and creates a better passenger experience. The great thing about the app is that it is easy to navigate and update, which has resulted in instant stakeholder buy‑in. The app is becoming ‘a single source of the truth’ – I like to call it a mini APOC in your pocket,” added Monika.

“We have also been able to create areas to help support specific projects and events, such as Airport Safety Week and Mental Health Awareness Week. This helps to bring attention of these events to more people than ever, and it is really easy to adjust access to particular companies on site so that they only see information that is relevant to them,” Nena explained.

The Airport Community App not only provides live operational data, it also has a contacts section and staff discounts and offers, plus a jargon buster to help with aviation acronyms.

At Manchester Airport, which is going through an ongoing transformation programme, site-wide staff have been able to use the app to enjoy useful updates from the ongoing project. This has given them an insight into the progress of the project whilst it has been behind the boarding. They have been able to look at progress pictures, read news, watch videos and get important information that might affect them during the build.

Information at your fingertips

Each airport has a section called Airport Central, which is fast becoming an extensive library full of handy information and documents provided by colleagues. This includes aerodrome manuals, winter operation plans, maps and safety alerts. By having these embedded in the app, staff can access them quickly, with the information at their fingertips, as and when it is needed.

The app is also improving colleagues’ journeys to and from work. It allows for notifications on road and rail issues to help minimise delays on everyone’s daily commute. In addition, at Manchester Airport, there is a live staff bus tracking tool, to help those who park in remote car parks.

What has also been introduced few months ago is a COVID-19 section where the airports post relevant government content, messages from the leadership team and up-to-date changes, linked to operations.

“The next major initiative for the app would be the integration of Airport Collaborative Decision Making (A-CDM) that will be introduced next year at Manchester and London Stansted. Having more accurate and targeted flight data will help our A-CDM partners to plan and monitor their processes more effectively. In addition, we would be keen to get the staff bus tracker for our Stansted colleagues,” added Monika.

In the future, both Monika and Nena are looking forward to hosting the Airport to Airport Community App forum, where international airports can meet and share ideas on the app’s developments.

Nena Adrienne is the Performance and Insights Manager at Manchester Airport (MAN) and is responsible for supporting all operational areas across the airport. In 2014, she graduated from Loughborough University (UK) with a bachelor’s degree in Air Transport Management. She has also completed a placement year at Airports Council International (ACI) – North America in Washington DC. Adrienne joined Manchester Airport as an Airport Management Graduate, completing placements across the business. Since completing the graduate scheme, Adrienne has worked in airfield operations as ATM Performance and Analysis Manager, working to improve performance of the airside environment with internal and external stakeholders.

Monika Simonaityte is the Air Traffic Management (ATM) Strategy and Deployment Manager at London Stansted Airport (STN). In 2015, Simonaityte graduated from Loughborough University with a bachelor’s degree in Air Transport Management, having completed a placement year as Aviation Security Coordinator with Airports Council International (ACI) Europe, based in Brussels, Belgium. Since joining the Stansted team, Simonaityte’s primary focus has been Single European Sky (SESAR) deployment; future ATM initiatives and modernisation; and engaging with and influencing ATM policy within domestic and European regulatory authorities. In the meantime, she’s heavily involved with deployment of the A-CDM project and development of an Airport Operations Plan (AOP) for MAG, which would result in a more transparent, predictable and efficient airport operating model. Since 2019, as Product Owner, Simonaityte has been responsible for the successful introduction of the Airport Community App at London Stansted Airport, overseeing the app’s use and continued development. She is a member of ACI Europe’s Technical, Operations and Safety Committee (TOSC), EUROCONTROL’s Airport Operations Team and other aviation forums.