The exercise was undertaken with participation from Hong Kong Airlines and more than 20 organisations and government departments. 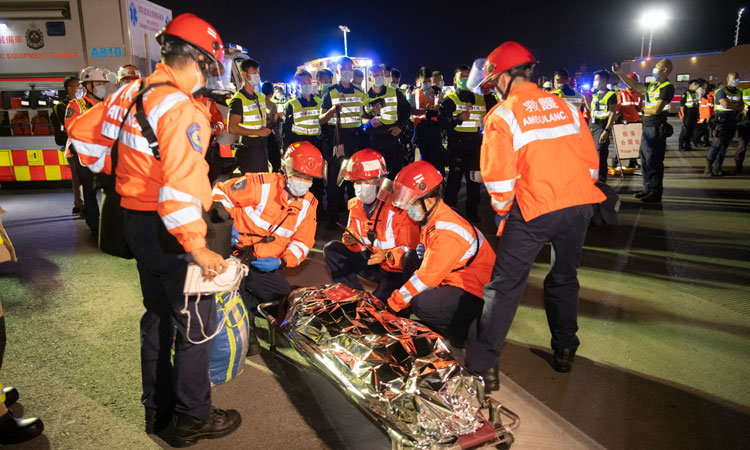 Hong Kong Airlines Limited was the participating airline this year, with more than 20 organisations and government departments joining the exercise. Volunteers were recruited to role-play as passengers as well as ‘meeters and greeters’.

The exercise started at 2am when the nose gear of a simulated arrival flight collapsed during landing on the south runway. A chemical substance, suspected to be detergent, leaked into the main cabin of the aircraft due to the collapse, causing eye and skin irritation to some passengers and crew members on board. Airport Fire Contingent personnel witnessed the incident and immediately activated the crash alarm. Emergency services including the Fire Services Department (FSD) and Hong Kong Police Force promptly arrived at the incident site to render immediate rescue, medical and other support operations. Meanwhile, the Airport Emergency Centre was activated to facilitate close communications and coordination among various departments and organisations. Upon confirmation from the airline that chemical had leaked into the cabin, FSD Operational HazMat Sub-team was immediately dispatched to set up a mass decontamination facility on the apron.

A total of one simulated death and 14 simulated injuries were reported during the exercise. Injured passengers and crew members were rescued and conveyed to four hospitals in ambulances or other vehicles. Uninjured passengers were transferred to the Passenger Reception Centre for assistance and police debriefing, and then underwent immigration and customs clearance before going to the Family Reception Centre to reunite with their families.

In response to the COVID-19 pandemic, a host of enhanced health measures were implemented during the exercise. The number of participants in the exercise was reduced. Meanwhile, all persons taking part in the exercise had to undergo body temperature screening and wear face masks. While at the Passenger Reception Centre and Family Reception Centre, hand sanitiser was provided at the entrances and key locations; people were also required to maintain appropriate physical distance.

Chapman Fong, General Manager, Airfield of the AA, said: “Safety is of the utmost importance at HKIA, and the drill provides a valuable opportunity for the airport community to test its readiness in response to contingencies and its ability to manage crises. In view of the pandemic, a series of enhanced health measures were also in place during the exercise to protect the health and safety of our participants and staff.”

Looking ahead to the new year: Airports’ sustainable recovery