Against the clock: Removing snow from the runway within half an hour

At Prague Airport, blankets of snow often cover the runway and could pose challenges to plane movements. International Airport Review spoke with Pavel Rejlek, Manager of Airfield Maintenance and Operation at Prague Airport, to see how the airport deals with such an unpredictable challenge. 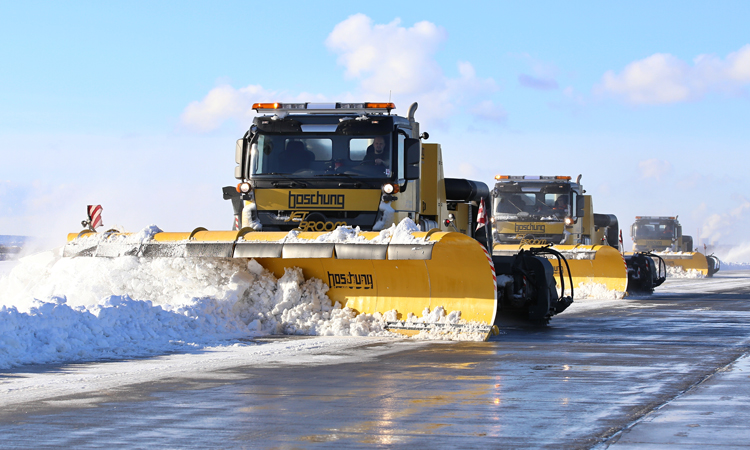 Handling almost 17 million passengers per year places a heavy burden on Prague Airport’s infrastructure, which is further complicated by snow in the winter. In order to avoid delays and ensure the safe dispatch of flights, the responsibilities of the Prague Airport Airfield Maintenance and Operation division includes, inter alia, to clear the snow from the runway system as efficiently as possible.

How do you prepare for the winter months?

I would say this is a year-round consideration. Once the winter season is over, all the machines are thoroughly cleaned, and afterwards, thoroughly inspected. We have to modify the machines during the summer in order to increase their reliability, including reinforcement of structural elements of ploughs and adjusting plough-blade angles. In September, we start preparing the machinery for winter operations. The machinery is lubricated and subjected to test runs so that it is absolutely ready for the first snowfall. During September and October, we also expand the driver team with seasonal winter personnel. Once the machinery is prepared, all drivers are trained and updated.

Is there any difference between the airport technology used for snow removal compared to highways?

Our technology can be compared to highway-gritting vehicles, however at first sight they differ in size. The small machinery ploughs are five metres wide with a working width of 3.5m, whereas the larger machinery has an eight-metre wide plough with a working width of 5.5m. There are also differences in the snow-clearing method. The snow plough is the same as on the highway, but the snow left by the plough is swept by a cylindrical broom located between the axles, and the surface is then finally blown with a stream of air.

Furthermore, our machines do not have a gritter. This work is done by airport sprayers, which treat the cleared surface with a de-icing agent. Their tanks contain up to 15,000 litres of liquid, which is then dispensed onto the surface by means of nozzles installed on the extension arms. With the arms fully extended, one sprayer can treat a 25m-wide lane. The dosage is determined by whether it is a preventive treatment, a conventional spray or a liquidation spray. The set dose is then automatically adjusted depending on the speed of the sprayer.

Another machine that you will not see on highways is the high-capacity snow plough that is included in the convoy of the RWY and TWY clearing machinery. It is designed to keep up with the moving convoy in terms of speed. This means that it is able to throw snow 100m away from the runway, up to a speed of 45km/h. The machine capacity is 7,500-10,000 tonnes of snow per hour.

Lastly, at our airport you can witness the use of jet blowers. These are jet engines installed on a truck bed: The turbojet engines are identical to those found on the L39 Albatros aircraft.

How long does it take to clear the runway?

We have set the runway service time to 30 minutes. The runway’s entire 45m length must be cleared within half an hour. We only have one entry and exit permitted, so we must clear the runway during one single pass of the convoy.

The convoy comprises of 12-13 plough-blowers, followed by two dispersing machines. A control vehicle circles the convoy operation and oversees the operation quality. In case of a heavier snowfall, we include two additional high-capacity snow blowers within the convoy.

If there is a need to clear the runway, the service manager will seek permission from the air traffic controller as to when it is possible to enter the runway. The convoy then waits in preparation for final permission to enter and begin clearing. The clearing operation completion time is confirmed during the course of clearing so that the air traffic controller has precise information as to whether we will finish earlier or later than planned.

What is the specific procedure of snow removal from the airfield?

We have specific procedures for how and where to clear the snow and what the allocated priorities of the individual areas are. It actually means which runway, along with its entries and exits, is cleared first, and which aprons and taxiways are to be cleared.

In order to ensure that the runway and the most important aprons are cleared, we establish two independent groups of machinery and personnel. The RWY group, to service the runways and taxiways, and the APRON group, to service the aprons. This group is also supported by a small group of road maintenance technicians to treat the service roads and to perform additional clearing of individual aprons.

Priority cleaning of all airfield surfaces is carried out with plough-blowers. If mounds exceeding the permissible limits form at the edge of the airfields, the snow blowers set off to blast the mounds away to a safe distance.

When it stops snowing and the airfields are treated, the second phase of clearing commences. Piles of snow mounds that cannot be expelled are loaded and transported to designated places. Other mounds are dispersed to a safe distance by the snow blowers.

How many people comprise your team?

The airfield service team consists of 65 drivers divided into five teams, each with its own leader. There is also a supporting team of five workshop specialists who are prepared to deal with machinery defects. Airfield maintenance operates in the H24 mode: There is always one team per shift (12 drivers and a leader). Once snowfall or another winter phenomena is assumed, a second crew is called in.

Snow only falls for a certain part of the year. What are your work responsibilities in the other months?

I would say that there is even more work to do in the months outside winter. Our biggest task is the treatment of the grass fields alongside the runways and taxiways, an area with an approximate size of 546 hectares. It is necessary to maintain the height of the grass within the range of 15-25cm, mainly to reduce bird population.

We also perform continuous machine-aided or manual cleaning of the aprons and service roads using airport and highway vacuum cleaners. We remove rubber from the runways using our own machinery on a regular basis during planned closures or as a result of measured braking effects.

We are continually upgrading our machinery and strive to maintain a world-class state-of-the-art fleet of machines, in order to ensure the proper, safe and efficient operation of the airfield and airport. There is really a lot to do. You just never get bored in an airport.