Marc Houalla, Executive Director of Paris-Charles de Gaulle Airport, gives an insight into how innovation and technology are essential for a successful future. 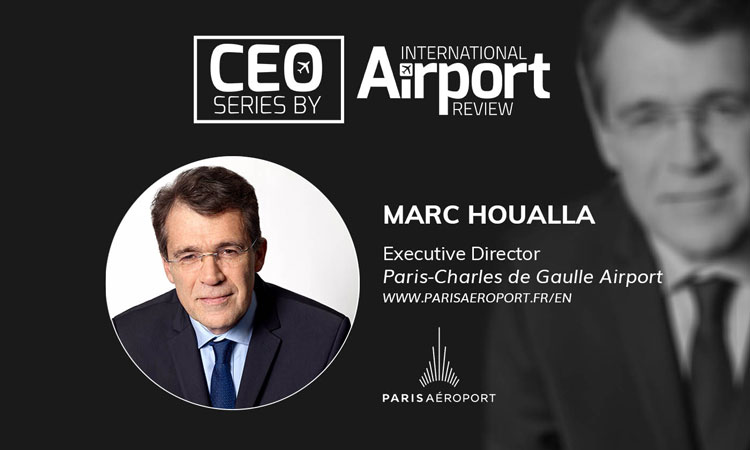 After graduating from École Nationale de l’Aviation Civile (ENAC), I began my career in 1985 as a Research Engineer at Transport Canada (the Canadian Civil Aviation) in Ottawa. I then joined the French Civil Aviation Authority (DGAC) in 1987.

During my 34-year career within the aviation industry, I have served in various technical, operational and leadership positions. These include Aircraft Maintenance Director, Finance Director, Airport Director, Air Navigation Service Director and the President of ENAC, which is the most renowned aviation university in Europe. The work involved includes the planning, building and operation of aviation infrastructure; providing and managing services to customers and students; and establishing partnerships with industrialists, international organisations, foreign government authorities and universities in different parts of the world.

I have been working for Groupe ADP (formerly Aéroports de Paris) since 2017, first as the Managing Director of Paris-Orly Airport, then the Executive Director of the Paris-Charles de Gaulle (CDG) Airport since February 2018. I am also currently the Deputy Executive Manager of Groupe ADP.

The biggest challenge, I would say, is to ensure real-time seamless coordination among key stakeholders – including airport coordinators, airlines, terminal operators, air navigation service providers, immigration services and retailers – and promote a constant strive for excellence.

Can you give us an overview of the three most exciting developments currently happening at Paris-Charles de Gaulle Airport?

As the second busiest airport in Europe, with 76.2 million passengers handled in 2019, Paris-CDG is constantly investing in its facilities through refurbishment and the creation of additional capacities.

Over the 2016 to 2020 period, the capital expenditure programme of Paris-CDG is budgeted at €1,735 million. Major projects that are currently underway include the refurbishment of Terminal 2B and its connection with Terminal 2D; the merger of Terminal 1’s international satellites; and the creation of a global luggage conveyor, sorting and security system in halls L and M of Terminal 2E.

We are also planning to start, by 2021, the construction of a new Terminal 4, with a 40 million passenger capacity, to cater for future growth and developmental needs. This will be our most significant project within the next decade.

As part of the Paris-CDG 2020 plan, we have also launched the development of an Airport Operation Centre (APOC) to enhance operational efficiency and capability in managing crisis situations. The APOC will act as the airport’s nerve centre, in which all major operational decisions are coordinated and integrated. Today, we have 20 operational control centres in Paris-CDG (airside, utilities, access and car parks, and a baggage system) involving 1,350 employees. Upon completion of this initiative, we will have one integrated coordination system, driven by one APOC organisation.

What is the biggest challenge Paris-Charles de Gaulle Airport is having to tackle?

Competition amongst major airport hubs has been more intense than ever. Being Europe’s number one hub for cargo and intercontinental passenger traffic (with 115 intercontinental destinations in 2019), Paris-CDG has to defend its position by strengthening its attractiveness and competitiveness. We also need to solidify Paris-CDG’s position in being the gateway between Europe and the Far East – in particular, China, with Paris-CDG currently connected to 12 destinations in China.

On top of stepping up investment in hardware as mentioned above, improving passenger experience is our top priority. In the past two years, we have been working closely with airlines, especially our largest client, Air France, to provide a more comfortable experience for passengers from check in to boarding. We have reduced the waiting time at immigration by investing in facial recognition facilities, and reduced road access time by using big data analysis. In order to increase the accuracy of baggage operations, we are in the process of testing with some airlines a hand-to-hand baggage tracking system using RFID technology; fully compliant with IATA resolution 753. It is an innovative solution which will enable a useful double-checking process in the transit zones.

I can proudly say that, with the concerted efforts of all airport stakeholders, the customer satisfaction level of Paris-CDG has tremendously increased in the past two years without new infrastructure. Our latest Skytrax ranking (edition 2019) stood at 30th, which is seven positions higher than our 2018 ranking; our aim is to reach the top 15 of the best airports worldwide by the end of 2021.

The main issue that came to mind is reducing the environmental footprint of the air transport industry, and there are many parameters that we can work on. For instance, engine noise, gas emissions and air pollution. The Flygskam movement in Europe and North America to reduce air travel in order to lessen the impact on the environment could spread worldwide, even if air transport as a whole represents just two per cent of global carbon emissions. Key players at every level of the aviation industry – aircraft manufacturers, airlines and airports – are continuously trying to address these sustainability challenges.

Between 2009 and 2018, Paris-CDG has reduced CO2 emissions by each passenger using the airport by 69 per cent. We have made a commitment to achieve carbon neutrality by 2030. To improve the energy efficiency of our facilities and develop renewable energies are two areas that we are working on.

Innovation will be the key. Individual stakeholders, such as airports and airlines, need innovation and technology to enhance operational efficiency, strengthen capacity in response to safety and security challenges, and provide new and customised services to passengers. The aviation ecosystem also needs innovation and technology to create synergy and integration among all stakeholders.

Zooming into Paris-CDG, we have been experimenting in robotics, automation and other new mobility technology in the terminals, such as ground autonomous vehicles. We are also developing new air mobility systems such as the VTOL, and are devising services which could be supported by VTOL. We have been making use of APIs, big data, passenger profiling and biometrics to create unparalleled experience to our passengers. Our goal is to make Paris-CDG tomorrow’s smart airport.

Marc Houalla has an engineering degree from ENAC and is also a civil engineer, with a Master of Business and Administration from HEC. After starting his career with Transport Canada, he joined the Civil Aviation division in 1987, where he successively held positions as Associate Engineer in the Technical Department of Air Navigation in Paris, then Head of the Technical and Finance Departments of SEFA (Service d’Exploitation de la Formation Aéronautique). From 1996 to 1998, he worked at SOFREAVIA (Société de conseil et d’ingénierie du transport aérien) as a Business and Financial Consultant. In 1998, he was appointed Director of Operations of Civil Aviation/South. In 2003, he became Director of the main airport of Marseille Provence; then in 2006, he created the South/Southeast Air Navigation Department in Marseille, of which he is the Director. In December 2006 he was named Chief of SEFA.

In November 2008, Houalla became Director of the National Civil Aviation School (ENAC), a position that he combined with that of Chief of SEFA, until SEFA was merged into ENAC. Houalla joined GROUPE ADP on 15 October 2017 as Director of Paris-Orly Airport and member of the Executive Committee. He was appointed Director of Paris-Charles de Gaulle Airport on 12 February 2018. Since 12 March 2018, he has been a member of the Board of Directors of GROUPE ADP.