Simferopol Airport: Designed in the form of a sea wave

The Russian airport was developed with passenger experience, terminal capacity, ecological impact and economical growth all in mind. 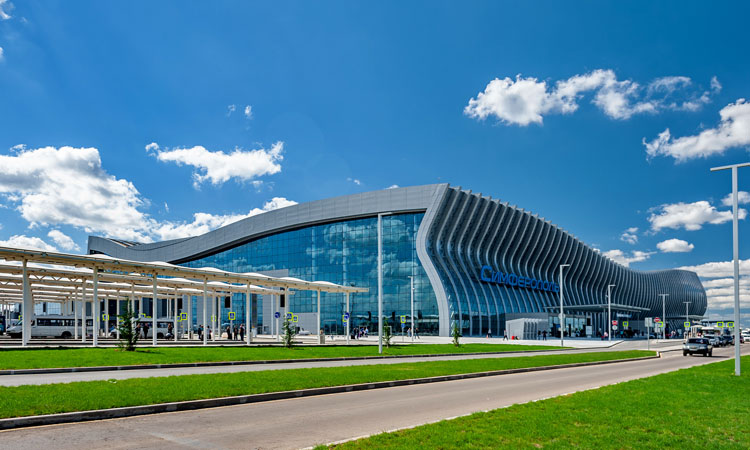 For several years, Simferopol International Airport has ranked among the top 10 Russian airports in terms of passenger traffic, and is one of the largest in the south of the country. Since 2015, with the most developed domestic route network, the airport annually serves more than five million passengers. In the summer season of 2019, 19 airlines operated flights from Simferopol to 56 destinations. At the peak of the high season, the airport handled more than 200 flights and welcomed approximately 34,000 passengers per day.

Since 16 April 2018, Simferopol Airport has been handling all its flights in an ultra-modern airport infrastructure, located just 15km from the centre of the Crimean capital. The main part of the complex is the new passenger terminal, built according to a unique project with an area of 78,000m2. The terminal, along with a dozen office facilities nearby, was erected in a clean field within 22 months by Russian company Acons Pro.

The new airport complex is built on the principles of public-private partnership. Its value amounted to 32 billion rubles, of which 30 per cent are investor funds and 70 per cent bank loans with the RNKB and Russia. The operator of the airport is Simferopol International Airport LLC: The Republic of the Crimea owns 49 per cent of the enterprise, and 51 per cent belongs to a pool of investors.

The construction of the airport complex has become the largest private investment project in the modern history of the Crimea. The terminal building, executed in an architectural concept of the Crimean Wave, immediately turned into one of the most popular symbols of the revival of the Crimea. 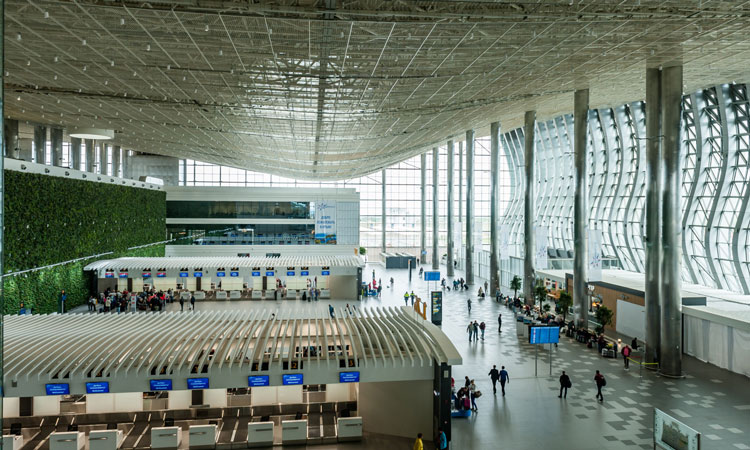 Both facades, landside and airside, are curvilinear in all planes

The new passenger terminal at Simferopol Airport was designed in the form of a sea wave by the South Korean company, Samoo Architects & Engineers. The capacity of the facility is 3,625 passengers per hour (6.5 million people per year). To create a unique silhouette of the terminal, the constructors mounted more than 5,700 tonnes of metal structure and erected 136 uniquely-curved columns up to 35m high. The glazing of the new terminal is also unique: In total, 130 stained-glass windows were installed, consisting of 9,000 double-glazed panels.

The height of the new terminal ranges from 25-35m at different points. Both facades, landside and airside, are curvilinear in all planes. The roof of the new terminal, with an area of 30,000m2, is also curved. This makes the wavy silhouette of the terminal noticeable from the air.

The square in front of the terminal contains a landscape park of 11 hectares, a dry fountain and a recreation area. Steppe shrubs and flowers are also planted in the form of waves that change colour depending on the season. The effect is achieved with carefully selected species that differ in height, colour, flowering and fruiting periods. 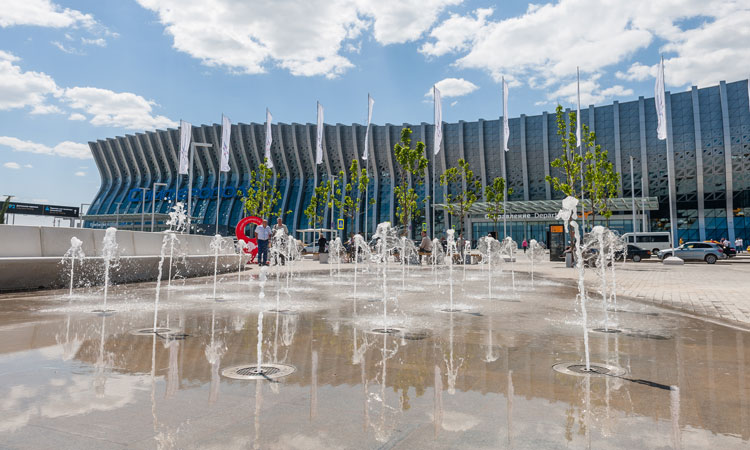 Outside the terminal there is a landscape park of 11 hectares, a dry fountain and a recreation area

Providing comfort for everyone at Simferopol

The passenger terminal is equipped with 28 elevators and 16 escalators, and boarding and disembarking of passengers is performed using eight passenger bridges. The airport terminal is fully adapted to the needs of visitors experiencing movement difficulties; parents with strollers, passengers with reduced mobility and elderly individuals.

For the first time in Russian history, all baggage at Simferopol is serviced by a complex system that is fully designed and manufactured in Russia. The baggage handling system includes 55 check-in desks, five baggage carousels for baggage claim, and equipment for the picking and handling area. The capacity of the system is 4,800 pieces of baggage per hour, which allows simultaneous loading for up to 25 flights and fully satisfies the airport’s need, even if the complex is expanded in the future. 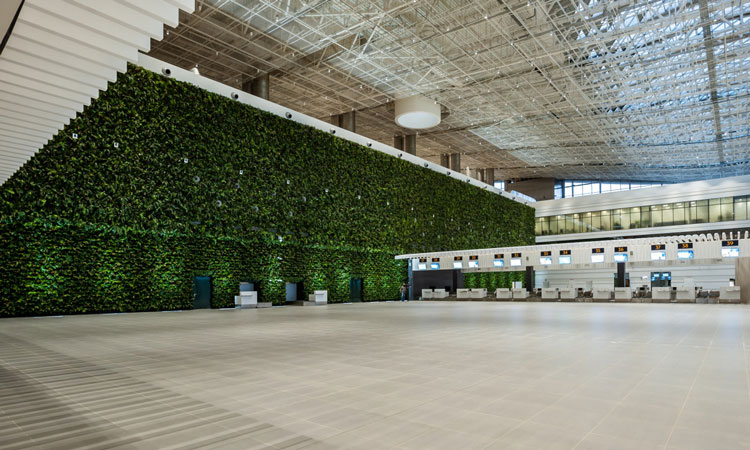 Simferopol International Airport is one of the most environmentally-friendly and green airports in Russia. On the ground floor, inside the airport complex, is Europe’s largest green wall. It consists of real and artificial plants with a total height of 15m and a length of 110m. The ‘real’, five-metre high section, consists of approximately 30,000 decorative deciduous and ampelous plants, such as ferns, arrowroots, philodendrons and epipremnums. Living ornamental plants are located in different corners of the terminal and the waiting area. In the arrivals hall, passengers are greeted by special glass cubes with tropical and subtropical species of green plants. On the wall in front of the baggage claim area there is an 18m2 map of the Crimean Peninsula, made of different types of moss.

The roof of the terminal is equipped with 14 sky-lights and two panoramic windows (with a total area of more than 3,300m2). They not only provide comfort for passengers due to the penetration of sunlight into the building, but also increase energy efficiency and reduce the environmental impact. The airport complex is equipped with an automated building management system, which allows energy resources to be distributed economically. Electric vehicles, which are actively used at the airport of Simferopol, also reduce the level of carbon dioxide emitted into the atmosphere. All tractors involved in moving luggage are equipped with electric motors and the airport operator is also exploring the possibility of using electric cars as ‘Follow me’ vehicles.

The airport complex of Simferopol Airport provides its visitors with not only a high level of modern service, but the opportunity to immerse themselves in the beauty of the Crimean nature, which is displayed to passengers throughout the airport until they board the aircraft. On the fourth floor of the airport’s security zone, there is an open terrace with a beautiful view not only of the tarmac and aircraft, but of one of the most famous natural symbols of the Crimea – Mount Chatyrdag; enticing individuals to return to one of the most beautiful peninsulas in the world.