Beginning investments in 2019, Katowice Airport has officially announced the opening of its new aircraft apron, which has increased aircraft stands from 37 to 46. 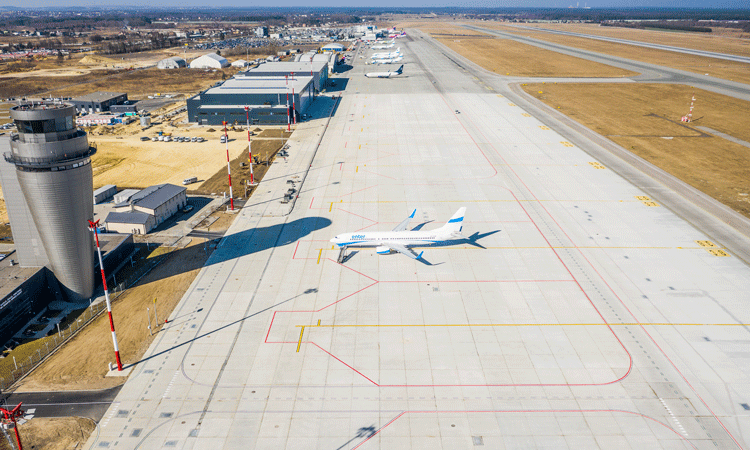 A new aircraft apron (surface: 6.4 ha) with nine stands for the most popular medium-haul Code-C aircraft (i.e. Airbus A320 or Boeing 737) has been put into service at Katowice Wojciech Korfanty Airport (KTW). By concluding the project, the number of aircraft stands has increased from 37 to 46. The investment began at the end of 2019 and is worth 51 million (zł) gross. The project was carried out by Silesia Invest.

Construction of the new apron is one of two tasks comprising the aircraft maintenance base expansion project. The second one is the construction of a third hangar which is being built in front of the new airport surface. The new hangar will be the biggest building of its kind at Katowice Airport; its surface will be 9.3 thousand sqm. Inside, there will be two bays for aircraft the size of an Airbus A321neo, which is 44.5 m long, 11.7m high and 35.8m wide. The building will be equipped with workshops and paint, social and office facilities. The construction of the hangar began in the first quarter of 2021, it will be put into service in mid-2022. The third hangar will be leased to Wizz Air.

“In spite of the COVID-19 pandemic, which caused the biggest crisis in the history of aviation, we have done everything to prevent investments vital for the development of Katowice Airport from stopping. We have succeeded. During the pandemic, we have expanded passenger terminal B. We are also expanding the aircraft maintenance base. The newly-put-into-service stands are significant for the development of Katowice Airport. They’ll also make handling aircraft with humanitarian aid for Ukraine much easier,” said Artur Tomasik, President of the Board of the Upper Silesian Aviation Group (GTL SA), the company managing Katowice Airport.

Since 2007, GTL SA has been consequently expanding the movement area at Katowice Airport, it consists of the runway, taxiways, and aircraft aprons. In 2007, when the company began the biggest investment programme in the airport’s history, the surface of the movement area was 33 ha, after 15 years of successful projects, it’s 88 ha. In 2007 to 2022, eight big projects associated with the expansion of the movement area were completed at Katowice Airport, five were connected with building new aircraft aprons. A new de-icing apron has been built, taxiways have been modernised, and a key task for the airport, i.e. the construction of a 3 200 metres runway and a taxiway system, has been completed. Total value of the investments associated with expanding the movement area in 2007 to 2022 was approximately 470 million (zł) gross, 130 million (zł) from that sum were obtained by the company via the EU Operational Programme Infrastructure and Environment Cohesion Fund.