As part of its partnership with the Algarve region, VINCI Airports has financed, developed, built and will operate the new solar plant at Faro Airport. 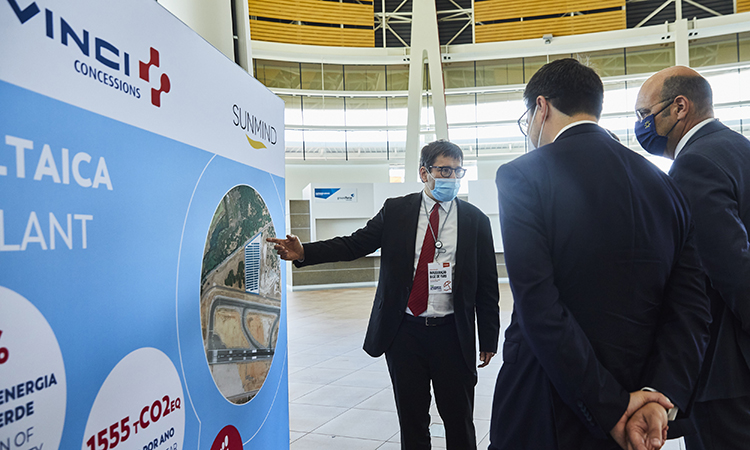 Pedro Siza Vieira, State Minister of Economy and Digital Transition of Portugal; Pedro Nuno Santos, Minister for Infrastructure and Housing of Portugal; Nicolas Notebaert, CEO of VINCI Concessions and President of VINCI Airports; and Johan Lundgren, CEO of easyJet, celebrated the opening of easyJet’s new base and the launch of the first in-airport solar plant in Portugal at Faro Airport (FAO) on 15 June 2021.

The easyJet base is a new illustration of VINCI Airports’ commitment towards Portugal and the Algarve region. Thanks to the €32.8 million modernisation programme that it delivered at Faro Airport, VINCI Airports has been strongly enhancing the airport’s attractiveness towards airlines and passengers since the beginning of the concession.

The airport has become a central element in Algarve’s tourism strategy and a key asset for the future, as Portugal is preparing for the recovery of tourism. The opening of easyJet’s new base – which is the result of a joint effort between easyJet, VINCI Airports and the Portuguese tourism authorities – will contribute to the ongoing opening of new routes in Faro.

VINCI Airports also gives new momentum to its partnership with the Algarve region by launching Faro Airport’s solar plant. It will have a capacity of 3MWp and will supply Faro Airport with 30 per cent of its electricity needs, generating an annual saving equivalent of more than 1,500 tonnes of CO2. The solar plant has been financed, developed, built and will be operated by VINCI Airports through its photovoltaic subsidiary SunMind. It will be operational in 2022.

By choosing Faro as the first in-airport solar plant in Portugal, VINCI Airports takes a new step towards the realisation of its environmental action plan in the Algarve region. Since the beginning of the concession, VINCI Airports has been activating partnerships with local environmental organisations, such as the Center for Marine Sciences of the University of Algarve, to foster knowledge on the region’s fauna and flora. VINCI Airports has already achieved a 13 per cent decrease in carbon emissions of the country’s airport network between 2018 and 2020.

The new solar plant in Faro is part of a global action plan deployed by VINCI Airports across all 45 of its airports in 12 countries, with similar projects already deployed or in development in the Dominican Republic, Brazil, the UK, Serbia, Sweden, France and now Portugal.

Nicolas Notebaert, CEO of VINCI Concessions and President of VINCI Airports, said: “VINCI Airports is proud to be launching a new phase in Faro Airport’s development today, alongside the Portuguese authorities. Together, we are placing the recovery of Portugal’s tourism under the banner of environmental progress.”