Airport showcase: Istanbul Airport, the biggest and the best

It was a truly historic event: Heads of State, Prime Ministers and high-ranking officials from around the world attended the grand opening ceremony. Just 42 months after the start of construction, on 29 October 2018, at the 95th anniversary of the founding of the Republic of Turkey, President Recep Tayyip Erdoğan opened the airport and gave it its name: Istanbul Airport. Two days later Turkish Airlines flight TK2124, the first to leave the airport, took off with 340 people on board, bound for Ankara. 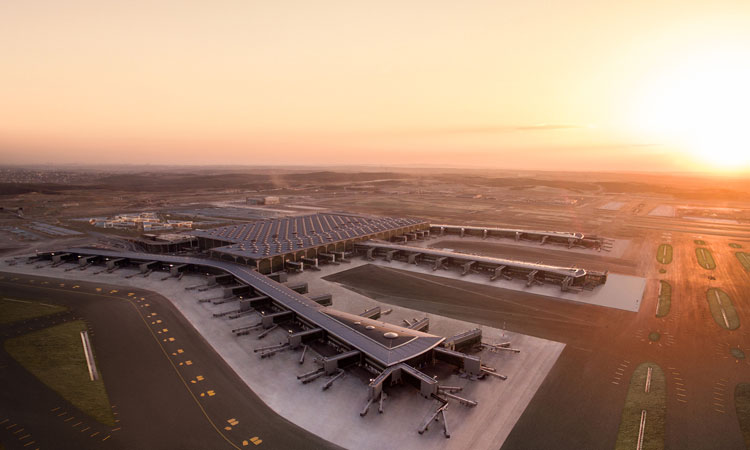 Many, many more will come. Around 250 carriers will eventually be housed at the airport, flying to 300 destinations. Up to 90 million passengers can be handled in this initial phase, but the airport is built to grow, it has an ultimate capacity of 200 million passengers per year. “With this airport we aim to bring the world closer together with a major hub at the intersection of Asia, Europe and the Middle East,” says Kadri Samsunlu, Chief Executive Officer and General Manager of İGA Airport Operation. “Our challenge is to be the biggest and the best.”

Before its opening, this mega-project had already received nine international awards, most notably for its breathtaking design. The control tower is spectacular, its twisted form based on a tulip, which has been the symbol of Istanbul for centuries. The terminal is the centre of the airport, with a floor area of 1.4 million square meters, it’s the biggest terminal in the world under one roof. It combines a unique sense of place with functionality, expressing the culture of Turkey with elegant, contemporary forms and offers passengers a great shopping experience. A duty-free area covering more than 55,000m2 square meters and food court covering more than 32,000m2 gathers with more than 400 local and international brands under one single roof for the first time.

The airport is not only setting standards in terms of design and technology; it is also a pioneer in sustainability. The terminal is designed according to the USGBC’s (U.S. Green Building Council) LEED (Leadership in Energy and Environmental Design) Certification scheme, a rating system awarded for the design, construction, operation and maintenance of green buildings and projects. A green airport-certification scheme by the Turkish Civil Aviation Authority will soon follow, and all tenants will also obtain Green Enterprise Certificates under the same scheme. The construction of the terminal aimed to be eco-friendly, too. An environmental and social impact study assessment was conducted at the beginning of the project, which consisted of action plans for the potential environmental impacts that the project might have.

In the biggest Build-Operate-Transfer (BOT) project in the history of Turkey, İGA – the joint venture that built the facility – has invested €22.15 billion and will operate the airport for the next 25 years. According to an independent Economic Impact Report prepared in 2016, the economic value created from airport-related activities, by 2025 will be responsible for 4.89 per cent of the GNP and it will employ 225,000 people by 2025. The investment thus makes a significant contribution to the Turkish economy boosting Istanbul’s position as a global aviation hub.