Airport IT is the way forward

To transform the end-user experience at Miami International Airport, the airport is investing in sophisticated IT. Beacon technology is one of the latest initiatives designed to revolutionise the passenger experience and operations at the airport. Miami’s Director of Information Systems and Telecommunications, Maurice Jenkins, tells us more. 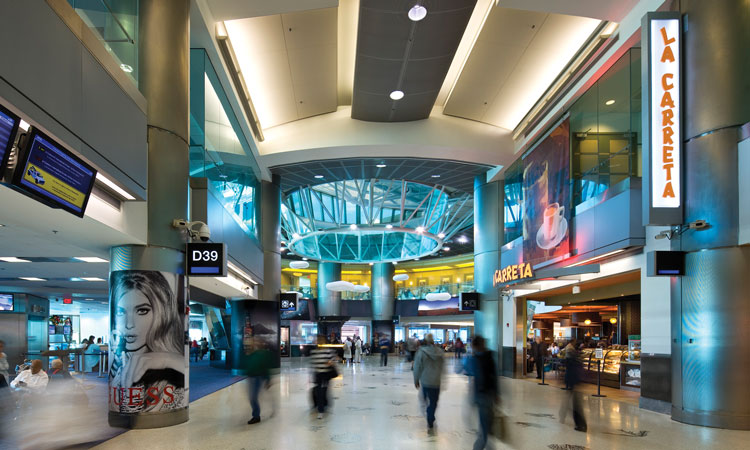 As one of the world’s busiest international passenger and freight airports, we focus strongly on the dynamic use of leading-edge technologies to enhance the experience of passengers and to make Miami International Airport (MIA) a more efficient operation.

Over the last two decades, MIA has been investing in a major capital improvement programme of which IT infrastructure is an integral part. The programme has modernised the MIA terminal and expanded it to more than seven million square feet. In the last seven years, we’ve gone from 32 million to 40 million passengers, and we’re expecting that growth to continue. To accommodate that growth, we have new state-of-the-art facilities and we’ve increased capacity.

Being landlocked near downtown Miami, it’s vital that we deploy technology to maximise our space. The way forward for our airport today is to deploy an IT infrastructure that supports three core functions: enable collaborative decision-making among our airport’s stakeholders; provide a better passenger experience; and maximise operational efficiencies. The end result is that we can continue to deliver a high level of service to our customers and business partners.

For these reasons, our team is very excited about one of our latest major IT initiatives: the deployment of beacons in a landmark collaborative project with Air Transport IT and communications provider SITA. Beacons are a breakthrough in geo-location and proximity technologies. The intent of this collaborative effort is to enhance the passenger experience, whereby creating the seamless journey and delivering airport efficiencies.

Beacons are small Bluetooth Low Energy (BLE) devices into which you can build sensors for location band services. They’ve been described as the ‘gateway to the Internet of Things,’ where everything that can be connected will be connected, for the purposes of communicating, tracking, monitoring, measuring and more.

Beacons present our airport with an unprecedented opportunity to communicate with our passengers via their smartphones, leveraging the smartphone’s task-orientated nature and ‘on-the-go’ capabilities, which make them ideally suited as a travel tool. That’s important, as per SITA’s 2015 annual Passenger IT trends Survey, smartphone ownership among travellers has risen to 83 per cent this year from 81 per cent in 2014.

The introduction of Google’s Eddystone makes beacons a bigger deal than ever. Until recently, beacons have been solely an Apple phenomenon. With Google joining Apple as a major player in the market, it confirms that beacons are here to stay. Miami International Airport’s beacons are already configured to support Eddystone, which offers cross-platform support for both Android and iOS. Eddystone and Apple’s iBeacons are both technologies that will co-exist, and they are joined by Samsung’s Placedge (a beacon-based service platform).

A first for Miami

At Miami International Airport, we’re proud to have been the first airport in the world to have a complete and open deployment of beacons throughout our facilities. With 250 beacons installed in 2014 and more than 150 being installed this year, for the first time we have a viable technology that can help us influence people’s behaviour as they traverse the airport.

Every beacon can now broadcast its identifier in the zone, and this can be used by airlines and other airport partner apps to generate useful content for passengers and staff. Everyone – from passengers to airport stakeholders – can interface with the beacons according to their particular needs in a framework compatible with their proprietary apps.

Beacons will play a crucial role in evolving our real-time intelligent airport environment, making possible a range of user interactions. For example, when a BLE-enabled smartphone or device moves within range of a beacon’s signal, it will trigger an action, such as displaying contextually relevant information on the phone. That can include notifications about security wait times, directions and estimated walk times to gates, alerts about boarding or delays, boarding passes as you approach the gate, and more.

You might receive location relevant promotional coupons as you enter a specific zone, such as a shop, cafe, airport lounge or art gallery, as well as information on other areas of interest.

At MIA, our airport’s beacons can be used by airlines, retailers and other partners. We’ve installed them in entrances, people mover trains, check-in areas, gates, baggage claim, valet parking zones, and at employee parking. We’ve also placed them in our rent-a-car areas, customs and migration, and across concessionaries such as retail areas and restaurants, so that passengers can receive context- sensitive information about promotions to their smartphones through proximity marketing campaigns or ‘time to board’ the plane messages.

There’s great potential for further apps to include advanced indoor maps, which are especially suited to beacon technology for way-finding, and are particularly useful when passengers need to be guided as they connect and move between concourses and terminals, which may involve several steps such as using airport trains, customs and security.

Google’s Eddystone has helped promote the idea of the physical Web, because it means the transmission of URLs that can be opened in a Web browser, unlike Apple’s iBeacons, which transmit UUIDs (Unique Universal Identifiers) that are detected only by apps. This is seen as a useful advantage with the Google indoor proximity solution because it can contextually target those who’ve not necessarily downloaded the airport or airline app, thus its very existence will encourage further interest and initiatives for driving contextual experience.

This promises further benefits, giving rise to myriad potential use cases, such as providing passengers with basic departure or arrival schedules depending on where they entered the airport. It could point to a website so passengers without the mobile app will still get some key day of travel information without a device.

So, it’s strategically important that we now have a way to let people know where things are, how long it will take to wait or walk, and what services are around them that they may be interested in, based on the length of their stay.

Instead of people looking down and digging through apps to find out information, the information they need to know will be visible at a glance. At the same time, we see uses beyond passenger service. One example is energy cost control. Here in Miami we’re blessed with beautiful, sunny weather, but as a result, our energy costs for air conditioning are extremely high. With beacons, it’s now going to be possible to micro-manage the airport’s air conditioning system to economise on our energy costs.

What’s driving this kind of approach is the Internet of Things (IoT), which combined with beacons, brings the Internet into the physical world like no other technology. The IoT describes a system in which the Internet is connected to the physical world via sensors everywhere. It’s reckoned that, by 2020, there will be 26 billion devices connected to the Internet. At an enterprise level, the IoT will exploit sensors in beacons to transform industry practices and manage all physical things everywhere, be it in our manufacturing plants, the electronic grid, and of course our aircraft and airports.

But one thing we must be sure of is to control beacon proliferation. Airports are shared environments and beacons should be treated as common-use infrastructure. Airports serve multiple airlines, and airlines travel to multiple airports. There is no need for every stakeholder to deploy their own beacons when beacons can be easily shared, especially in common areas.

That’s why SITA has set up the air transport Common Use Beacon Registry1. For those using the system, which includes MIA, it means beacons can be operated using the same common-use approach that’s proved so successful with other shared services and infrastructure.

The registry is beacon-vendor agnostic and will ensure beacons use a common form of data sets based on industry standards. It will enable all industry players to leverage existing common use beacons deployments at airports throughout the world – including developers looking to create new apps for use worldwide.

There is currently an initiative underway via Airports Council International in the formation of a beacon registry task force, to set and establish standards for which MIA is a participating member. One should expect to see airports lead the way in beacon technology – due to such a real world need with the growing global middle class who have the means to fly. There are so many aspects of the processes where people need help along the way, and where ‘things’ throughout and beyond the airport environment will benefit from being connection into the airport eco-system.

Maurice Jenkins functions as the Principal Advisor to the Aviation Director on all matters related to information management and information technology. He has full strategic and tactical responsibility for the direction, planning, creation, and operation of the Aviation Department’s information technology infrastructure, telecommunications services, application support and end-user support services.  Maurice’s strategic vision has successfully culminated in the integration of new technology in the opening of the new South and North Terminals at Miami International Airport.