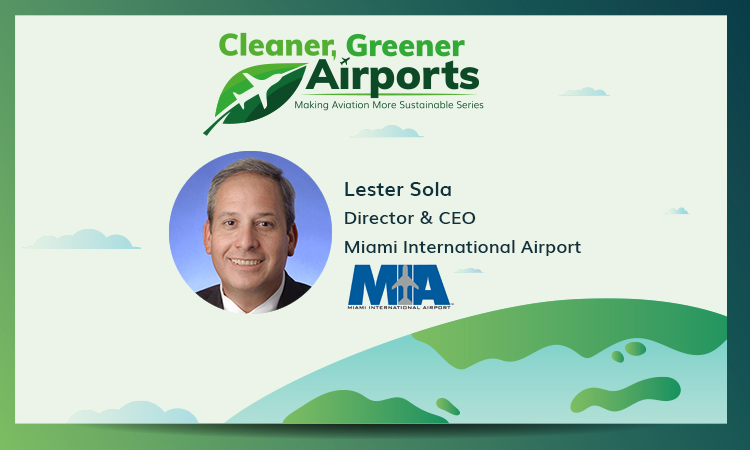 A variety of green projects at Miami International Airport (MIA) have the airport plugged into millions of dollars in energy savings annually – helping to reduce our carbon footprint, reinvest in our community and remain at the forefront of sustainability efforts within the aviation industry.

The most recent project is the $45 million Sustainability Project Phase II, completed in November 2020, which will save enough water to fill 16 Olympic-sized pools and enough gas to fuel 4,856 cars for the next 15 years.

Completed in partnership with Florida Power and Light Services (FPLS) over nearly three years, it is the largest energy conservation project ever in the State of Florida and one of the largest in the eastern United States.

Through the installation of $45 million worth of energy-efficient lighting, domestic water and heating, ventilation and air-conditioning (HVAC) system upgrades, the project will save $3.2 million annually in utility costs – approximately 10 per cent of the airport’s annual electrical cost. It will also achieve nine million gallons of water consumption savings annually over 15 years, eliminate the presence of R-22 refrigerant in the HVAC systems at MIA – ahead of the Environmental Protection Agency’s ‘phase out’ of R-22 production and import by 2020 – and eliminate the presence of mercury vapours in lighting systems at MIA. In total, the project will generate $60 million in guaranteed savings during the 15-year payback period to FPLS.

MIA is one of the largest energy consumers in Miami-Dade County, generating monthly electricity costs of more than $2 million.

Miami-Dade County’s Mayor, Daniella Levine Cava, recently said: “In addition to being Miami-Dade County’s largest economic engine and job creator, MIA is also an important community leader in energy and water conservation. We recently announced that Miami-Dade joined the ‘Race to Zero’ to get to net-zero carbon emissions by 2050, and the positive example that MIA has created through ongoing investments in sustainability will help to drive us toward this ambitious goal. I applaud the wonderful public servants at our Aviation Department for their steadfast commitment to the protection of our environment and preservation of our planet.”

Phase II followed the completion of Phase I in 2018, which will generate a total of more than $40 million in energy and water savings through to 2032.

Controlling temperature, humidity and CO2 monitoring in a space as large as MIA is quite a task. That’s why we’ve replaced our air-handling units with more efficient ones, which have energy management controls and new valves and sensors.

Bringing airport equipment up-to-date with highly efficient replacements saves energy and time, with less maintenance required and easier energy control. We are even taking preventative measures to reduce the number of flickers that can cause interruptions and system downtime. In areas like baggage claim, this improvement is critical and has resulted in faster baggage pick-up for travellers, as well as a better overall airport experience.

Introducing a more streamlined approach to lighting with fewer kinds of lighting systems means fewer parts and pieces to keep track of and store, and more efficient bulbs means that maintenance might not have to replace a single light bulb for 10 years.

With Phase I of the Sustainability Project, we’ve eliminated 400 different types of lighting, streamlining maintenance to save time and kilowatts. By upgrading more than 100,000 light bulbs, we’re making it easier for everyone to see – whether it’s a book you’re reading or an agent checking your ticket – with the right light, the airport is moving even more smoothly.

Using less water is good for all of us. There have been a lot of changes to help the airport to use less water, like switching out front-load washers and upgrading the restroom facilities. Then, with more efficient air conditioning systems and air-cooling systems, travellers stay cool while using less energy.

MIA is also improving sustainability in the Sunshine State through solar power. The millions of passengers who land at MIA every year are now greeted from below by a Florida landmark that showcases Miami-Dade County’s commitment to innovation and clean energy. In January 2020, Florida Power & Light Company (FPL) and Miami-Dade County launched a half-acre, 402-panel floating solar installation into the waters of the Blue Lagoon adjacent to the airport. The partnership between FPL and Miami-Dade County is the largest floating solar array in the south-eastern U.S. and the first ever at an airport.

Visible from planes flying overhead, as well as to drivers along the 836 West/Dolphin Expressway, the solar array generates 160kW of power and prevents 165 tonnes of carbon dioxide emissions annually. The array will double as a test bed for cutting-edge solar research, particularly the performance of solar panels on water.

A decade of green thinking

Over the past decade, MIA has partnered with FPL Services to implement multiple energy conservation projects throughout the airport. Since 2011, MIA has made the following upgrades that have realised savings of more than $8.4 million: improved lighting levels by retrofitting more than 16,000 fixtures; replaced more than 4,250 mercury vapour fixtures (which can no longer be used, per the EPA), with T5 fluorescent and metal halide lights; replaced more than 850 high pressure sodium fixtures (yellow light) with induction fluorescent light; increased light levels on average by 1.5 to two times; and implemented occupancy sensors.

Through engineering analysis, system design and construction, more than 4.7 million square feet within the airport terminal and concourses were analysed in 2010, resulting in the following energy efficiency upgrades to improve the comfort, safety and aesthetics of the airport: retrofitting more than 23,000 lighting fixtures, which resulted in improved light levels; replacing more than 5,400 mercury vapour fixtures, which can no longer be used; and replacing seven air handling units with conversion to low-flow units. These measures achieved approximately $1 million in energy savings each year, plus an annual average of $156,000 in savings on materials over the last 10 years.

Lester Sola is the Director and Chief Executive Officer of the Miami-Dade Aviation Department. He oversees operations at Miami International Airport (MIA) and four general aviation (GA) airports in the Miami area, which together generate $31.9 billion in business revenue and support more than 275,000 direct and indirect jobs. MIA leads the way, handling more than 46 million passengers and more than two million tonnes of cargo annually, placing it among America’s busiest international passenger and cargo airports. Sola has served Miami-Dade County for nearly 30 years.