Belgrade Nikola Tesla Airport is determined to set the benchmark for sustainability. Nicolas Brousse, Chief Technical Officer at Belgrade Airport, details the work taking place to lower the airport’s carbon footprint and place environmental policy at the very heart of its operation in the next instalment of International Airport Review’s exclusive series. 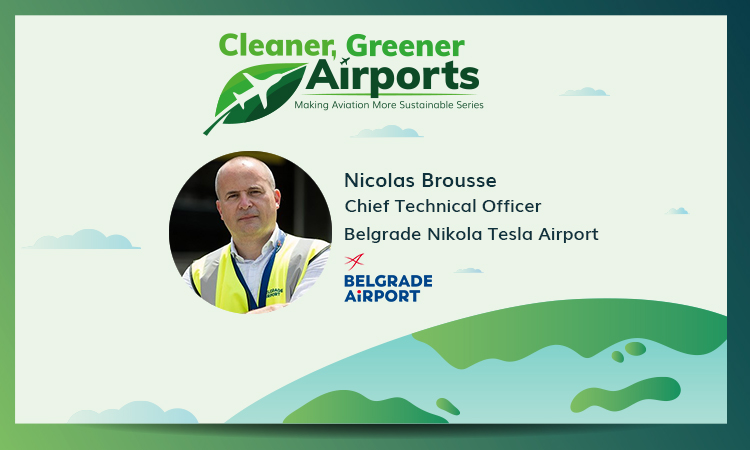 Belgrade Nikola Tesla Airport (BEG) has been a member of the VINCI Airports network since December 2018, when a 25-year concession contract was signed with the Serbian government.

Investment is being made to renovate the airport, improving its capacity and operational efficiency and bringing quality to the highest international standards. As such, the airport has just unveiled its new central area within ​​the passenger terminal, after five months of work: a comfortable, bright and connected relaxation area which offers travellers new ‘walk-through’ shops, a bar-restaurant and a play area, in accordance with VINCI Airports quality standards. In addition, in 2020, a new waiting area for buses was completed, preparatory work began on the new track and its traffic lanes and construction of the new parking lot is nearing completion.

Determined to be a reference for sustainability within the region, Belgrade Airport is striving to reduce its environmental footprint”

Determined to be a reference for sustainability within the region, leading environment transformation in Serbia, Belgrade Airport is striving to reduce its environmental footprint in the following areas: waste management; water consumption and effluent treatment; and carbon footprint.

Belgrade Airport is investing heavily to implement the AirPact Policy – the VINCI Airports Environmental Strategy that was launched in 2015 for all 45 of its airports worldwide. As the initial targets defined in 2015 have already been achieved, in 2020, VINCI Airports reiterated its determination to become the environmental standard setter for the airport sector by announcing new, even more ambitious commitments to be achieved by 2030. Namely:

To improve its waste management, Belgrade Airport is adopting the Circular Economy concept; making a transition from a scenario where natural resources are extracted from nature, used and disposed as waste into landfill, to a scenario where waste generation is avoided and, when it is generated, is not treated as waste, but as a raw material to other productive processes, being reused, recycled, used to produce organic composting and energy, etc.

To achieve these targets, new visual communication is being implanted at waste bins and the entire waste operational flow is being reviewed, considering all of its steps: generation, internal collect, internal transportation, segregation and valorisation, storage and final destination and treatment to companies that use our ‘waste’ as raw material on their productive processes. To make it possible, two new waste facilities, integrated to the waste operational flow, will be built at the airport, one airside and the other one landside, where the waste will be received, segregated into specific categories, stored to be sent to treatment and managed. The new landside waste facility is already under construction and will be delivered in the first semester of 2021. The airside waste facility is planned to be operational in 2022.

In January 2021, the maintenance team installed seven new water meters in strategic points around the airport. The consumption data is collected daily, and a Water Consumption Committee is being developed to analyse the data, identify problems and their root cause and then act”

To reduce water consumption, the first step is to understand the airport’s consumption behaviour, so, in January 2021, the maintenance team installed seven new water meters in strategic points around the airport. The consumption data is collected daily, and a Water Consumption Committee is being developed to analyse the data, identify problems and their root cause and then act. In the short term, this avoids water waste and unnecessary consumption; in the long term, the data will be analysed to define new projects and to make strategic decisions.

Consumed water is used for different purposes at an airport – for drinking, to produce food at the restaurants and cafes, in the cooling and heating systems, at the toilets, for cleaning, to supply the aircrafts, at fire safety tests, etc. This means that a good part of this consumption is converted into effluent, also known as waste water.

To treat the effluent generated, Belgrade Airport is building a new WWTP (Waste Water Treatment Plant) with high treatment efficiency, not just to meet environmental legislation and international standards, but to use the effluent as raw material to produce something extremely noble, water! All of the airport’s effluent will be collected and pumped to the new WWTP, where it will be treated and transformed into reuse water, which will be able to supply toilet flushes, the cooling towers, the new heating plant and other non-noble uses. It is important to mention that the reuse water produced by the WWTP will not be used for potable uses, such as cooking, washing hands or drinking water.

The implementation of this project will have two significant positive impacts:

Belgrade is also installing aerating nozzles in the washbasin taps, which will result in a water consumption reduction of at least 70 per cent, with no impact in user perception or hand sanitisation. In addition, timed flushes at the urinals and toilets are being installed, and waterless urinals will be installed in the extension and renovated areas of the passenger terminal building.

By implementing these actions and projects, Belgrade expects to see a 30 per cent reduction of its potable water consumption in the following three years”

To reduce our firefighters’ water consumption from the daily tests necessary to meet legislation and to ensure that all emergency equipment is ready for use, a civil structure with contention and pumps is to be built, allowing the equipment to collect and recover the water, subsequently supplying the system again.

For the climatisation system, which is usually one of the highest water consumers of an airport, three old chillers were replaced by three new, high efficiency chillers. Water decarbonators were also installed at the cooling towers to improve water quality and  reduce consumption.

By implementing these actions and projects, Belgrade expects to see a 30 per cent reduction of its potable water consumption in the following three years.

Belgrade Airport has also structured a strong strategy, in line with that of VINCI Airports, to reduce its carbon footprint. In December 2020, the airport achieved the Airports Carbon Accreditation (ACA) Level 1, delivered by Airports Council International (ACI).

But the efforts will not stop here; Belgrade Airport has already set a target to obtain ACA Level 2 (‘Reduction’) in 2022. To achieve this challenge, the airport must reduce its direct emissions (i.e. scope 1 and scope 2 emissions) and, as a consequence, its carbon footprint.

So, important projects were planned and are being implemented from 2021.

A 1 MW solar farm, composed of 3,000 photovoltaic modules, will be installed this year, able to supply the airport with around 1.200.000 kWh of clean energy per year – equivalent to the consumption of 80 houses. This sustainable project will reduce the airport’s carbon footprint by 875 tonnes of CO2 per year.

To reduce this emission, a new heating plant will be built, with a new boiler room which uses natural gas as fuel, therefore significantly reducing its environmental impact (CO2 and local air quality). In order to increase efficiency and prevent any form of energy waste, the following are envisaged:

The envisaged solutions and adopted equipment achieve greater efficiency in both the production and distribution of thermal energy and, as a consequence, reducing our carbon footprint.

In 2020, Belgrade Airport replaced all of its terminal lighting with LEDs, and plans to make the same replacement in Cargo, Post Office and Warehouse in 2021.

Eight new electrical 400Hz systems have just been installed to supply the aircraft, and three more are planned in the coming months. These systems will make it possible to limit the use of Auxiliary Power Units (APUs) and, thus, reduce airline emissions.

In parallel to these investments in sustainability, new meters with telemetry will be installed in the main consumption points, and a multidisciplinary Energy Reduction Committee is being developed to manage consumption, identify new opportunities and to reduce the airport’s consumption even further.

This is just the beginning, as the Belgrade Airport team really believes that the airport’s activities can walk hand-in-hand with sustainability, resulting in positive mobility and impacting on a better world.

Nicolas Brousse graduated from a French generalist Engineering School in 1996. He has held several management positions on major turnkey projects in the past 20 years across Europe, the Middle East and Asia, encompassing transport infrastructures such as railways and airports. Brousse is currently Chief Technical Officer of Belgrade Nikola Tesla Airport for VINCI Airports.