The highest point has been reached in the construction of a new Pier A at Amsterdam Airport Schiphol. 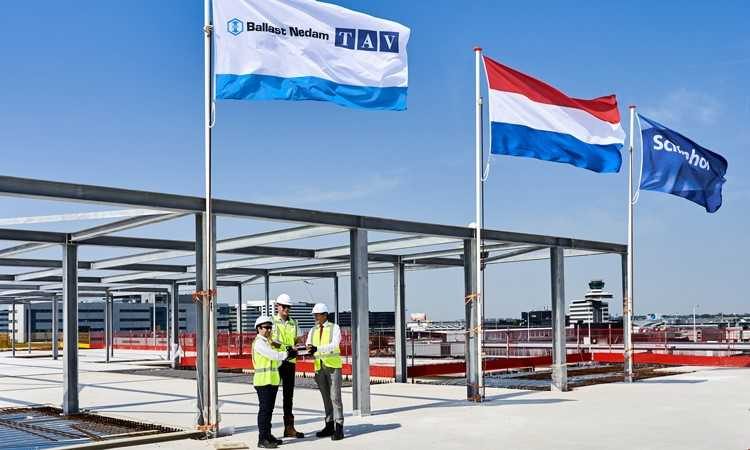 Together with building partner Ballast Nedam/TAV Construction, Schiphol has held its traditional ceremony in which the flag is raised to the highest point and the customary builders’ gift is handed over. Reaching this milestone has brought the new pier’s completion one step closer.

Now some 1,200 piles, 100,000 nuts and bolts and over 4,200 beams further down the line, the construction has reached its highest point. The new pier has three stories and a surface area of 55,000 square metres, equivalent to the size of 11 football pitches. The pier was designed to be as flexible as possible with regard to handling various types of aircraft and passengers. For example, a total of eight new gates will soon be added, with space for five narrow-body aircraft on the north side and three spaces for wide-body aircraft or five narrow-body aircraft on the south side.

The new pier is also suitable for all types of passengers: Schengen, non-Schengen, screened and unscreened.

Sustainability plays a key role in the pier’s construction. For instance, biomaterial, insulating glass and recycled plastic are being used. In addition, some 5,000 square metres of solar panels will be installed on the roof. The pier is due to be opened at the end of 2020.