Oslo Airport displays work by one Norway’s most famous artists

For the first time, the Munch Museum has displayed an original work outside the museum. 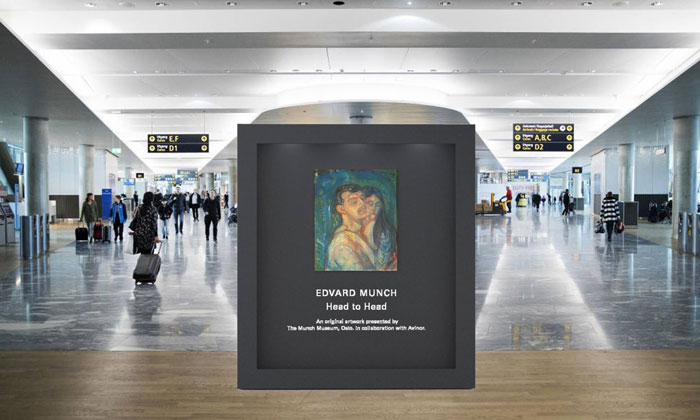 CULTURAL JOURNEY: Travellers can for the very first time enjoy original work from Edvard Munch outside the museum on the exhibition at Oslo Airport

For the next decade, visitors at Oslo Airport will be able to soak up a ‘faceful of Munch’ as they pass through the terminal. This is because its operators Avinor and the Munch Museum have entered into a ten-year agreement to display original works by one of Norway’s foremost artists, Edvard Munch.

The first piece was revealed last week, on the one year anniversary of the official opening of the expanded Oslo Airport.

“With this, the Munch Museum and Oslo Airport wish to give travellers an unusual and surprising experience, an art break in an otherwise busy day of travelling,” said Munch Museum Director Stein Olav Henrichsen.

The works will form part of Oslo Airport’s extensive art programme. There is a specially designed showcase in the new international terminal, easily accessible to both Norwegian and international travellers.

“We are very proud to be able to show travellers from all over the world one of Norway’s greatest artists. We have many travellers who either have Oslo as their destination or who are just passing through, and now they will have the opportunity to see works by one of Norway’s finest, namely Edvard Munch,” said Airport Director Øyvind Hasaas.

Making art available is one of the main goals of the city of Oslo’s art plan. The desire is for people to experience art in a place that most people visit, and this is made possible in an entirely unique way by letting them stand face-to-face with Munch’s works.

“Edvard Munch gave Oslo an immense gift when he bequeathed his art to us, and it’s important to us to share it with as many people as possible. At the same time, Munch’s works are a part of the DNA of Oslo, something unique and exciting about our city. Treating the travellers at Oslo’s airport to a faceful of Munch is a great way of welcoming them to our city. I’m glad to have established this collaboration,” said City Council Leader Raymond Johansen, who unveiled the work.

The first of Edvard Munch’s works to be displayed is the painting Head by Head (1905), featuring the artist himself. In addition, the stone used for the lithograph Separation (1896) will be displayed. The work will be replaced by a another original work after a period of one to two years.