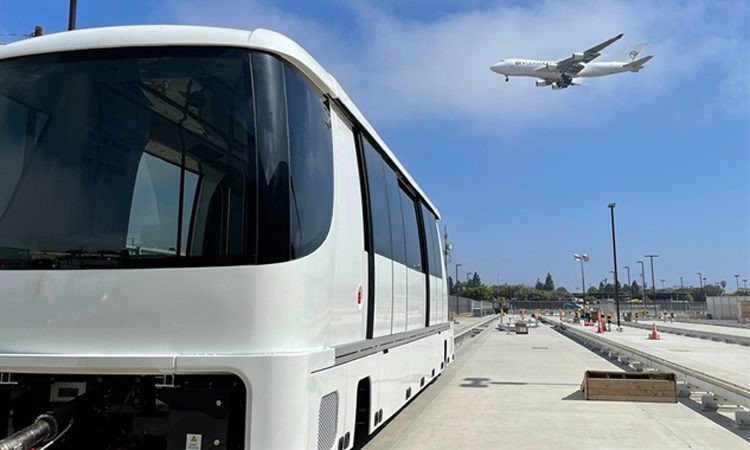 Los Angeles Mayor Eric Garcetti joined city, federal, and airport officials to debut a critical component of the future of Los Angeles International Airport (LAX) with the unveiling of the first Automated People Mover (APM) train car. LAX will be the first U.S. airport to feature the INNOVIA 300 APM vehicles, which showcase the latest technology to help revolutionise how passengers get to and from the fifth-busiest airport in the world.

The APM system will reduce vehicle congestion and traffic in and around LAX when it opens, while providing the long-awaited connection to regional transportation, including Metro light rail.

“The Automated People Mover will be so much more than another way to get to LAX – it’s the piece of the puzzle that will curb the congestion that has been plaguing our airport for decades,” commented Mayor Garcetti. “As we welcome the first car that will whisk travellers to renovated terminals, parking structures, Metro rail, and a new rental car facility, it’s clear that a completely reimagined LAX is on the horizon.”

The debut of the train car took place at what will serve as the operational hub for the APM system,  the Maintenance and Storage Facility, and was emceed by Mayor Garcetti. Also joining in the celebration were Rep. Maxine Waters, whose 43rd Congressional District includes LAX, Board of Airport Commissioners (BOAC) President Beatrice Hsu, LAWA Chief Executive Officer Justin Erbacci and Roya Noorbakhsh, the Chief Technical Officer of LAX Integrated Express Solutions (LINXS), developer of the APM system.

“I am excited and proud to see the first train cars delivered for LAX’s Automated People Mover,” said Waters. “Construction has been moving at a fast pace and when complete will enable airline passengers to reach their terminals from anywhere near a Metro light rail line at a fraction of the current cost and without contributing to local traffic and vehicle emissions.” 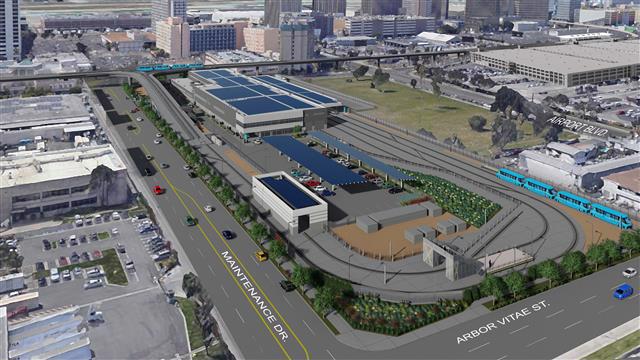 A rendering of the APM Maintenance & Storage Facility. Credit: LAX

“Innovation, sustainability and state-of-the-art technology are integral to our ongoing modernisation,” added Justin Erbacci, Chief Executive Officer, LAWA. “These Automated People Mover train cars will set a high standard for environmentally sustainable transportation, having shells made of recyclable materials and achieving zero emissions. We look forward to seeing the cars in action when we begin testing them in 2023.”

The centerpiece of LAX’s Landside Access Modernization Program (LAMP), the APM is a 2.25-mile electric train system that will transport travellers in and out of the CTA. The APM will feature six stations: three inside the CTA, which connect to the terminals via elevated pedestrian walkways, and three stations outside the CTA, which will connect to new off-site parking facilities, including LAX Economy Parking, regional light rail transportation and a Consolidated Rent-A-Car (ConRAC) facility. The APM project is a critical investment into the infrastructure of Los Angeles as the city prepares to welcome the world to the 2026 World Cup and 2028 Olympic and Paralympic Games.