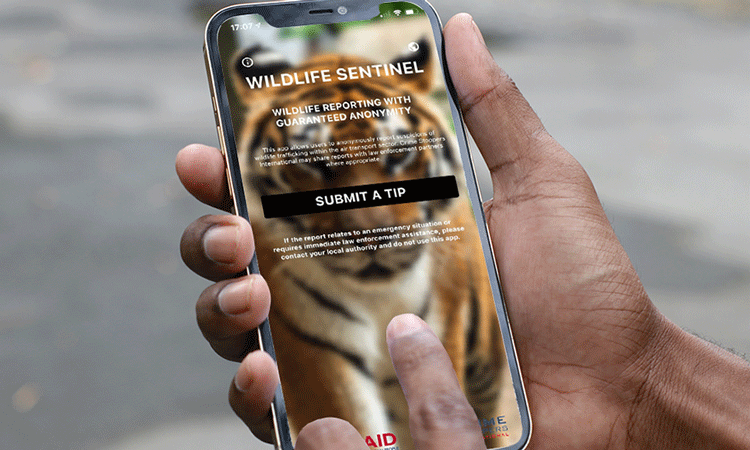 A consortium of NGOs and industry partners have pooled their expertise to create Wildlife Sentinel: an app to help staff at airports, airlines, and other aviation companies report suspected wildlife trafficking and corruption. Released by Crime Stoppers International, the app is already being used by aviation personnel with many reports already providing indicators of wildlife crime.

Crime Stoppers International (CSI), in collaboration with the USAID Reducing Opportunities for Unlawful Transport of Endangered Species (ROUTES) Partnership, has created a mobile device application that allows members of the aviation industry to anonymously report suspicions of wildlife trafficking.

“Wildlife Sentinel is already proving to be a valuable tool in the fight against wildlife crime,” said Shane Britten, CEO of Crime Stoppers International. “By providing aviation sector employees with a simple-to-use, anonymous reporting method, we are giving them the ability to quickly report potential illegal activity and help put an end to this heinous crime.”

The release of Wildlife Sentinel fills a critical gap in the aviation sector’s response to wildlife trafficking. Annual surveys issued by the International Air Transport Association (IATA), that has guided the development of the app, have consistently indicated that airlines want a dedicated, anonymous illegal wildlife trade reporting system that allows personnel to report suspicious passengers, staff, baggage, and cargo to law enforcement.

The immediate uptake and use of Wildlife Sentinel by aviation officials has verified this need. Within just two months of the app being available on the Apple Store and Google Play Store,  over 120 reports have been received relating to potential wildlife crime, which have been triaged by Crime Stoppers International for reporting on to law enforcement agencies.

A major advantage of Wildlife Sentinel is its anonymity, which gives the app significant potential in countering corruption – a considerable obstacle in the fight to end illegal wildlife trade. CSI specialises in anonymous reporting; the app is engineered in a way that ensures information that could identify the user is removed.

Corrupt officials can facilitate the exploitation of the aviation industry by wildlife traffickers, for example, by blocking due diligence, providing false permits and compromising security checks.

“Corruption is helping wildlife traffickers move their illicit goods undetected through aviation industry routes. Using the app, aviation personnel can share their concerns safely, without fear of repercussions from corrupt officials or other personnel,” said Crawford Allan, Leader of the ROUTES Partnership and Senior Director for America and Wildlife Crime at TRAFFIC.

The app contains a simple form to share information such as what aroused suspicion, the location, details of the person(s) involved and flight details. This report is then reviewed by CSI, and passed onto the relevant law enforcement authorities.

The app currently has English, Spanish, and Portuguese language versions, with more languages to come.