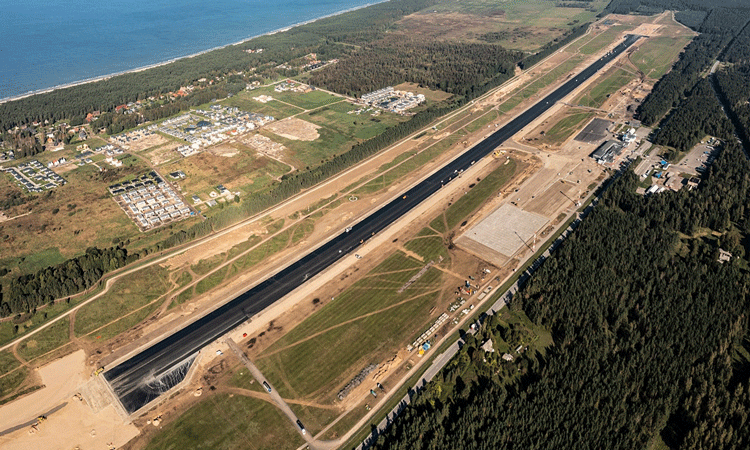 The reconstruction of Palanga Airport (PLQ), which began in September 2021, has been completed. All the planned works have been completed: the runway and taxiway have been upgraded, the apron has been reconstructed, and the engineering and lighting systems have been renewed. On 21 October 2021, the airport resumed operations after a 45-day shut-down and welcomed its first scheduled flights.

The renovation of Palanga Airport, in accordance with the latest international standards, will ensure the safety of airport operations and faster aircraft servicing, as well as the safe movement of aircraft and savings in fuel costs. The reconstruction has made the airport more environmentally friendly, thanks to the introduction of eco-friendly solutions.

The opening ceremony was attended by Marius Skuodis, Minister of Transport and Communications, Šarūnas Vaitkus, Mayor of Palanga, Armands Svikis, the Managing Director of Latvian construction company ‘A.C.B.’, and the management of Lithuanian Airports.

According to Marius Skuodis, Minister of Transport and Communications, aviation is perhaps the most affected area by the COVID-19 pandemic, and it was therefore necessary to ensure investment in the renewal of the infrastructure of the airports to speed up their recovery.

“I am delighted that this strategically important project has been able to secure funding, be implemented successfully and very quickly at a time when the aviation sector is still in the early stages of recovery. Convenient air transport services are crucial to Lithuania’s economic development. Airports operations need to be improved to ensure safe and smooth flights. We will continue to focus on the reconstruction of Vilnius Airport’s passenger terminals,” said Skuodis.

According to Marius Gelžinis, Head of Lithuanian Airports, the renewal of the infrastructure will ensure the successful development of flights at the seaside air gateway.

“We thank our colleagues and partners for their professional project management and expeditious work – Palanga Airport is ready to resume full operations. We are pleased that in the context of recovering aviation, Palanga Airport will be ready to expand air traffic without having to worry about the state of the infrastructure. We have no doubt that the reconstruction will bring long-term benefits both to the Western region itself and direct benefits to the national economy,” commented Gelžinis.

According to Šarūnas Vaitkus, the Mayor of Palanga, a modern airport in the region will make a significant contribution to the growth of flight supply.

Vaitkus added: “The reconstructed Palanga Airport, which is of great importance for the whole region of Western Lithuania, will become even more attractive and safer for aircraft movements. I have no doubt that the modern airport infrastructure, which complies with the latest international standards, will become one of the factors that will help to attract new flights to Palanga, and expand the geography of flights in Western Lithuania.”

During the event, Armands Svikis, the Managing Director of the Latvian company ‘A.C.B.’, which carried out the main contractual works at the airport, thanked for the trust it had placed in his company during the reconstruction of a strategically important state facility.

“We are grateful to Lithuanian Airports for the trust they have placed in us and we are delighted with the successful co-operation on the second facility of strategic importance to Lithuanian aviation. We can confirm that the entire project has been implemented exactly as planned in terms of work and time. The project involved a team of more than 300 people, who worked like clockwork and, in addition to delivering everything on time and to a high standard, managed to ensure a sustainable project that was friendly to nature and people. We thank the residents of Palanga and the surrounding districts for their patience and understanding throughout the reconstruction and wish them good flights,” said Svikis.

What has been done?

One of the most important works carried out during the reconstruction of Palanga Airport is the renewal of the runway, which is almost 2.3km-long and 45m-wide. Replacement of the top layers of asphalt and deeper levelling layers. In total, more than 200,000m2 of old asphalt were replaced.

The signal light system has been redesigned to be more efficient and environmentally friendly, by replacing the old lamps with energy-saving LED lights. The work involved the installation of around 100km of cabling and more than 600 new lights. These solutions should reduce electricity consumption by around 20 per cent for the runway lighting alone after the reconstruction.

The issue of reducing CO2 emissions during the reconstruction has been addressed on the apron itself, by installing specialised aircraft Ground Power Unit (GPU) in certain aircraft aprons, underground. Once they are in use, Palanga Airport will no longer need diesel power equipment in most cases.

Lithuanian Airports reminds that the remaining reconstruction works will be carried out until 1 December 2021 – the processes will take place at the existing airport and normal procedures will not be interfered with.