On the same day as the airport confirmed its carbon neutral status for emissions under its direct control, Edinburgh Airport has published its new, ambitious sustainability strategy. 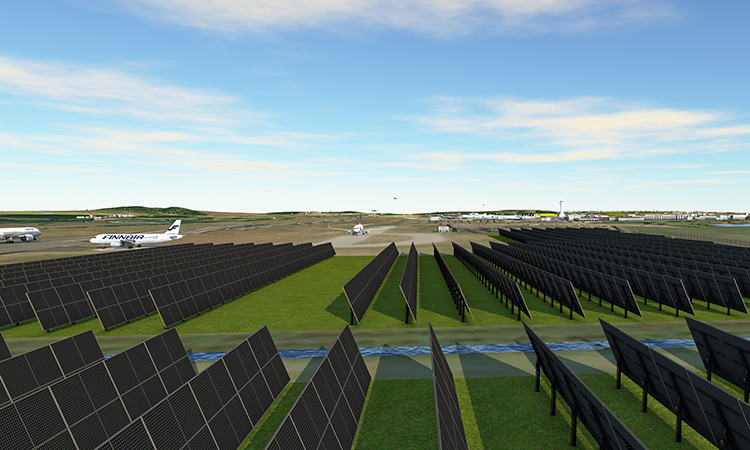 An 11-acre solar farm is to be constructed on Edinburgh Airport’s (EDI) airfield as the airport publishes its new sustainability strategy, ‘Greater Good’. The announcement and strategy came on the same day as the airport confirmed its carbon neutral status for emissions under its direct control, demonstrating its commitment to a more sustainable future.

The solar farm, the first of its kind at a Scottish airport, will provide 26 per cent of the airport’s energy needs, and construction is due to begin in late 2021. The facility is expected to be operational by summer 2022 and has been supported by Scottish government funding of £2 million.

The project is one element of the airport’s new sustainability strategy, ‘Greater Good’, which sets out how the airport will work towards being more sustainable now and in the future. An important characteristic of the strategy is the fact that a sustainable future depends on not only reducing environmental impacts, such as carbon, but also how the airport manages and enhances its social and economic impacts.

The ‘Greater Good’ strategy focuses on four key pillars to achieve a sustainable future for the airport:

The strategy has a number of targets within it, such as achieving carbon neutrality for indirect emissions by 2024 and establishing a campus-wide sustainability standard, as well as a Cleaner Engine Standard. The ‘Greater Good’ strategy also takes into account some of the work that is already being carried out at Edinburgh Airport, such as purchasing 100 per cent renewable electricity since 2018, diverting all waste from landfill, paying all staff the Real Living Wage and its commitment to the Modern Slavery Act.

Gordon Dewar, Chief Executive of Edinburgh Airport, said: “Our sustainability strategy is about more than just carbon; it’s about making our business, Scotland’s gateway to the world, sustainable and a social and economic asset that serves future generations. To do that, we have to carefully consider our impact on the environment and act accordingly. Our operations are already carbon neutral and, while we are proud of that, we know there is more to do for the greater good of Scotland.”

“For an island economy, travel is an important reality, and we need to have a sensible conversation about how to balance the desire and need to travel – whether to see family or do business – in the wake of the pandemic and making our industry cleaner and greener. It’s a challenge for all sectors, but particularly for ours,” he added.

Dewar continued: “Aviation is a force for good in Scotland. It’s a significant employer and it directly supports tourism, our universities, business and culture, making a major contribution to the economy. A sustainable future is what we all want and, in the year that COP26 comes to Scotland, we all have a duty to set out our plans to tackle emissions. We’re excited to get started on that path with the ambitious actions and targets set out in ‘Greater Good’.”

Regarding the construction of the solar farm, Dewar said: “We are excited to be the UK’s first airport to construct a solar farm on an airfield. Some may doubt the power of sun in Scotland, but our solar farm will deliver around 26 per cent of our energy needs and allow us to deliver energy back into the grid when we produce more than we need.”

“This project illustrates our commitment to making environmental improvements and is something that passengers will actually be able to see as they arrive or depart. We want to be a leading voice and advocate for a new and improved approach. We will continue to identify opportunities to help us move towards our goals, because we know that ‘Greater Good’ will evolve with the climate landscape,” he concluded.

The Scottish government’s Minister for Transport, Graeme Dey, said: “I’m delighted to learn of the heartening efforts of Edinburgh Airport to reduce their emissions. The solar farm, in particular, illustrates how government and the aviation industry can work together to help achieve Scotland’s ambitious climate change targets. Together, we can look to create a future in which we enjoy the social and economic benefits of air travel without having an impact on the environment.”

Pharma.Aero conducts review of air cargo industry in the distribution of COVID-19 vaccines