From 1 June 2021, sustainable aviation fuels will be delivered, stored and used to refuel at Munich Airport, supporting the airport in achieving its ambitious climate targets.

Munich Airport (MUC) has announced that, from 1 June 2021, ‘green kerosene’ will be used to refuel aircraft at the airport, in addition to standard fuel. After thorough technical testing, the fuel depot at MUC is now being opened for climate-friendly fuels of the future.

This means that sustainable aviation fuels (SAF) can now be delivered, stored and used to refuel at Munich Airport, provided that they meet the relevant quality specifications for Jet-A1 aviation fuel. The tank farm, which is supplied with fuel by various oil companies on behalf of airlines, is thus also permitted to receive deliveries of SAF blends, i.e. conventional paraffin with an admixture of renewable fuels.

Munich Airport is the owner of the entire tank infrastructure, which extends from the tank farm via a roughly 17km underground pipeline system to the aircraft parking positions. Skytanking Munich GmbH & Co. KG is the operator of the tank farm and ensures the quality control of the delivered fuels. Operationally, Skytanking is responsible for the fuelling of the aircraft, together with other providers of fuelling services.

The SAF fuels that are currently used are mostly produced from renewable raw materials, so-called Biomass to Liquid (BtL) fuels. In the future, however, the industry will also see synthetically produced paraffin that will be available on the market, so-called Power to Liquid (PtL) fuels, which are produced by electrolysis using water, CO2 and renewable electricity.

Although burning SAF, produced in the PtL process, releases the same amount of CO2 emissions as fossil paraffin, the crucial improvement comes in the production process itself: CO2 is used for production and is almost completely converted to fuel during this process. This, in turn, leads to the result that CO2 emissions can be reduced by SAF compared to conventional paraffin by about 70 to 100 per cent, depending on the efficiency of the plants. 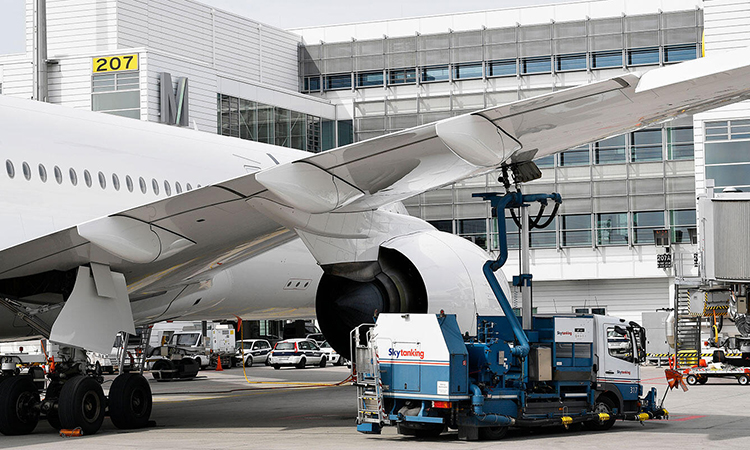 “By approving our refuelling facilities for sustainable aviation fuel, we are enabling airlines to reduce their CO2 emissions on flights from Munich by using sustainable aviation fuels. Green fuels have a key role to play on the way to a complete decarbonisation of air transport. We expect the share of these sustainable fuels in total energy consumption in aviation to increase continuously in the coming years,” says Jost Lammers, CEO of Munich Airport.

The Chairman of the airport’s Supervisory Board, Bavaria’s Minister of Finance, Albert Füracker, also sees the opening of the refuelling facilities for alternative fuels as a forward-looking move: “Bavaria’s aviation hub is thus sending a clear signal for sustainability and climate protection in air transport. I hope that many airlines will take advantage of the opportunity to refuel their aircraft with lower-emission fuel in Munich and thus contribute to climate-friendly mobility.”

Airlines will be able to refuel their aircraft used at Munich Airport with sustainable aviation fuel from the beginning of June 2021. The fuel from renewable energy sources is fed into the fuel depot at Munich Airport as an SAF blend that is already ready for refuelling. This blend of fossil paraffin and an admixed SAF content of around 35 per cent will then enable particularly lower-emission flight operations.

Munich Airport is also pursuing an ambitious climate protection strategy in the operation of the airport and is consistently reducing CO2 emissions with the aim of operating the airport in a CO2-neutral manner by 2030 at the latest. In order to achieve its climate targets, Munich Airport is investing a total of €150 million by 2030. However, Munich Airport’s long-term goal is to completely reduce all CO2 emissions to net-zero carbon by 2050 at the latest.

Queen Alia International Airport recognised as ‘The Voice of the Customer’