Off-airport activities: The future of baggage handling at Tomorrowland

Large events, such as festivals, can create a great burden for airports and airlines, who usually receive an abundance of passengers at the same time, all wishing to check in their luggage. Yorick Buys, Project and Process Manager, and airline spokesperson, Maaike Andries, reveal Brussels Airlines’ revolutionary pilot to provide a remote baggage drop off service at a festival site. 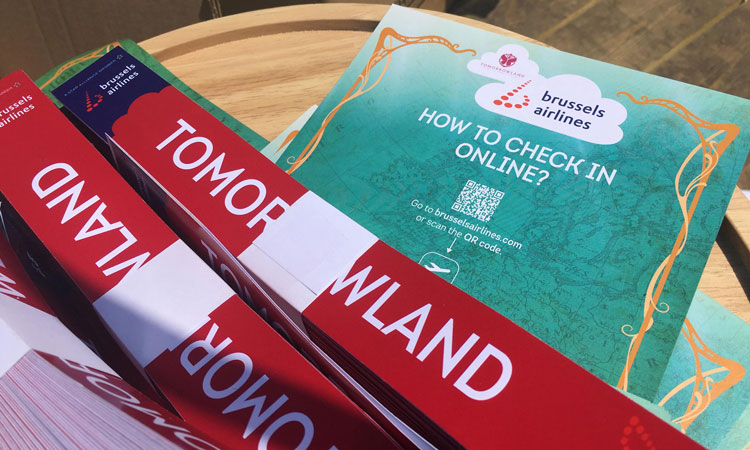 Spanning two separate weekends and attracting over 400,000 visitors, Tomorrowland is one of the world’s most notable music festivals and is held annually in the Belgian town of Boom. This presents a challenge for Brussels Airport and its flag carrier Brussels Airlines. In a unique remote baggage handling pilot, Brussels Airlines became the world’s first airline to offer its customers the possibility to drop their hold baggage off at the campsite of a festival when they opened a baggage drop-off zone at Tomorrowland.

With the creation of a mobile application, Brussels Airlines made it possible to bring the airport service to the location of the customer and created a mobile airport check-in, so to speak. With this innovation, Brussels Airlines offered an extraordinary service to customers visiting Tomorrowland, by giving them the opportunity to check-in their bags for their return journey at the campsite of the festival. It was a win-win situation; enabling festivalgoers to enjoy a day of sightseeing in Belgium, or just helping them to travel luggage-free to the airport, while making the challenging time at the airport a little easier for airport colleagues, who otherwise would have to handle an immense load of baggage all at once at the close of the festival.

Since 2012, Brussels Airlines and Tomorrowland have collaborated to bring festivalgoers from all over the world to Belgium for the music festival. With gate parties at departure gates all over the world and flights hosting parties with live DJ sets on-board, the airline offers thousands of guests a complete Tomorrowland experience, which starts at the beginning of their journey. As the airline is constantly looking for new ways to improve the experience of its customers, it came up with the idea of a remote baggage drop off at the festival site.

After the festival thousands of travellers leave from the same location around the same time with a lot of luggage. When visiting a festival, the amount of baggage can easily add up to four pieces per passenger, including a backpack, tent, camping chair and another extra piece of baggage. These travellers all arrive at Brussels Airport at around the same time, wanting to be freed of their luggage as soon as possible, even if their flight is still hours away. On the one hand, the burden of carrying that luggage makes the traveller lose a day of relaxed vacation whilst, the vast number of bags that need to be checked-in at the same time create a huge workload for the airport’s service agents.

The idea for a remote baggage drop-off point emerged after the 2017 Passenger Terminal Expo. The Brussels Airlines team was inspired by presentations about alternative baggage flows and started brainstorming. Together they concluded that a baggage drop-off at Tomorrowland would complement the challenging operations Brussels Airlines experiences during the festival. In addition, the free-of-charge service is a tangible benefit for Tomorrowland guests who are flying back home with the airline. Allowing them to be freed of their bags when leaving the festival means they can visit Brussels or Antwerp before their flight home. Prior to the pilot, the airline hadn’t received requests from passengers to provide the service, but it proved to be very well received once launched.

For Brussels Airlines, it was a great test case to start thinking about other ways of using remote check-in to improve the passenger experience. Following the 2017 pilot, Brussels Airlines offered the service again for Tomorrowland 2018, a fully communicated extra service, and with 4,700 checked-in bags, they reached three times the result of the pilot.

To see how the remote bag drop-off works, you can look at it as a little mobile airport. The check-in is set up outside DreamVille, the Tomorrowland campsite, and in a five-step process, the passengers’ bags are checked in and brought to the airport.

First, agents welcome the guests and check if the passenger has a valid boarding pass. With their boarding pass, the guests can proceed to the check-in agents who will check in the bags with the Ground Operations Mobile Application (GOMA). In the third step the bags enter the secured zone, and from this point security personnel monitor the process in exactly the same way as they do at the airport. The bags go straight into a truck that is sealed until it arrives in the secured zone at Brussels Airport. All bags are trackable from the moment they enter the secured zone. Once the truck arrives at Brussels Airport, the seal of the truck is broken under supervision of security agents. Airport staff off-load the baggage from the truck and inject them into the airport baggage handling system on transfer belts.

All bags have a ‘to be screened’ status, making sure that the process is secured from one end to the other. Once at the airport, the bags follow the same screening as a ‘normal’ bag. There are two main differences between ‘normal’ and ‘remotely dropped off’ baggage. Firstly, that the baggage is checked in with an in-house-developed mobile application instead of a general airport system. Secondly, that it happens at a remote location, which requires road transport and a new security setup.

The importance of technology

Technology has played the most important role in the realisation of the remote drop-off. The mobile application, that was developed in-house, made it possible to install a flexible setup in a limited space. A big advantage of the mobile application is that it requires minimum training, which makes it possible to work efficiently with ‘non-skilled’ staff. Thanks to that, Brussels Airlines colleagues from other departments were able to help and keep waiting time limited to just minutes.

Brussels Airlines is looking into options to implement the service at other events wherefore many people fly to Belgium. The company is currently investigating how to commercialise the service further as it has the potential to become a revenue stream. It is a big step towards taking baggage handling to a next level. The company envisions it in a roadmap for full door-to-door baggage services.

Yorick Buys has been Project and Process Manager at Brussels Airlines since 2016. He works with a team of six colleagues and leads the business development unit that is responsible for new developments and business intelligence for (ground) operations. His first role at Brussels Airline was as a Revenue Management Development Analyst. Yorick graduated from the Delft University of Technology in 2012, with a Master’s degree in Aerospace Engineering.

Maaike Andries has been a spokesperson for Brussels Airlines since June 2018. Before starting her career as a communications professional, Maaike graduated from the Thomas More University of Applied Sciences, where she obtained her Bachelor’s degree in Communication Management.