“Can we change the way we’re perceived?” This was the question London Luton Airport (LLA) asked ico Design back in 2013. Little did the brand consultancy anticipate that this simple question would provide a succinct brief for a project that would result in one of the world’s most progressive airport brands. Russell Holmes, Strategy Director at ico Design reveals the strategy behind the brand. 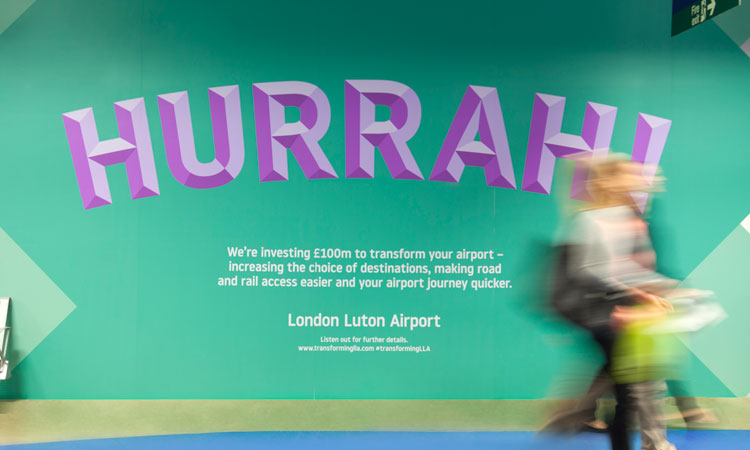 Years of under-investment had resulted in Luton Airport being perceived as tired – the terminal experience was drab and uninspiring. The opportunity to reinvigorate the airport came late in 2013 when a change in ownership heralded the start of a huge £160 million investment to improve the facilities and passenger experience. Along with the airport management team, we saw the opportunity for LLA to not only redesign the physical terminal, but also redefine its purpose and the entire passenger experience.

It was during ico Design’s initial conversations with the board that we proposed the creation of a brand for LLA – a creative solution that, at first, could have seemed strange for an airport. However, we saw that if correctly conceived, an LLA brand would create a deeper, more emotive connection to passengers, and give the airport gravitas when communicating with businesses and stakeholders. The challenge became clear – delivering meaningful change, underpinned by strategic rigour – not merely the surface gloss provided by a new logo.

In order for the brand to succeed, the entire management team had to understand its purpose and be involved in its creation. After all, the senior team had incredible knowledge of the airport and would need to ‘own’ the new brand and drive its future success. We conducted a series of workshops and discussions with the management team, and it was during these that a series of brand values and a brand purpose began to emerge. 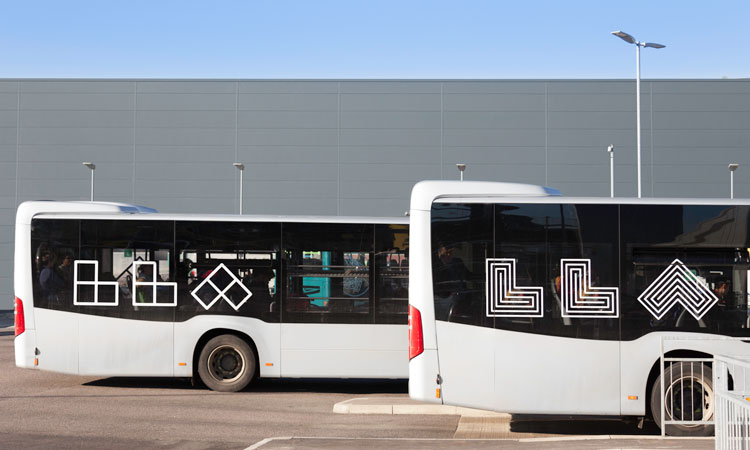 The re-branded LLA comes to life through the airport

At the same time we immersed ourselves in every aspect of LLA, gaining further insights from key stakeholders such as airline partners, retailers, the local council etc. This is where, having never worked in the aviation industry, I believe we had a distinct advantage – our experience of LLA was largely through passengers’ eyes. We constantly asked ourselves where the opportunity for the brand lay.

We also looked beyond the sector, to the retail and leisure industries. St Pancras International was an example we kept returning to. A station that had been overlooked for decades, it had now repositioned itself, putting the customer experience at its heart. Now it was not only a revitalised transport hub but also a retail and food destination. Back in the nineties few would have considered meeting at the station for lunch; today the options are plentiful and of fantastic quality.

Similarly, over the past four decades, shopping centres had morphed from big sheds full of stores, to experiential spaces, where much of the excitement is within the public space, not the retail units. Today’s public expect stations and transport hubs to be far more than functional, they expect them to be considered spaces full of excitement and delight. LLA had a fantastic chance to create an airport brand that captured some of the emotive aspects of travel. Everywhere we looked, the business case for creating the brand grew stronger.

Today’s public expect stations and transport hubs to be far more than functional, they expect them to be considered spaces full of excitement and delight

Strategically positioning any brand is critical. This means defining the purpose, values and essence that underpin the brand. The ‘purpose’ is a short articulation that expresses why an organisation exists; it should resonate with the organisation’s business goals. The ‘values’ are a series of words or short statements that articulate the brand’s strengths and points of difference. Once adopted, the brand values act as pillars, making it easy for multiple stakeholders to make decisions on a brand level. Put simply, if a communication, initiative or campaign doesn’t ring true with the values, it’s not on-brand and therefore shouldn’t be continued. The ‘essence’ is a short statement that perfectly encapsulates the values of the brand in a more emotive way – think ‘Just Do It’ for Nike.

Our research and workshops resulted in a set of brand values that had started to take form not only from the conversations we’d had with management, but from a broad understanding of the commercial opportunities. Similarly the brand purpose ‘To make air travel easy and enjoyable’ aligned with the future direction of LLA’s business. The brand essence ‘Simplicity with a smile’ provided a perfect summary of the brand values and expresses the airport’s ambition to deliver an engaging and easy journey for all passengers.

Once the strategic positioning had been signed-off, our next task was to create a visual identity that responded to the values and encapsulated the essence of ‘Simplicity with a smile’. If we’d designed the identity in isolation from any strategic direction, the result would have been a logo and system that had no points of reference and no brief. Also, importantly, our client would have had nothing to judge our creative response against. As such, the brand values and essence formed a perfect creative brief.

For the new visual brand to succeed, it would need to affect and influence every part of the business. It required a personality that would talk to and resonate with passengers, whilst having the ability to communicate confidently with corporate partners, external industry organisations and even the government. It must have impact at a large scale and be subtle enough to carry complex information.

By its very nature, the aviation industry is risk-averse, with innovation being adopted slowly. A clear example of this approach could be seen in the brand identities in the sector. There are some outliers (Liverpool John Lennon, for example) however, dozens of airport logos take flight and motion as a starting point; chances are they’ll also include a plane or a ‘swoosh’. Remove the name, and the identities are virtually interchangeable. From an outside perspective they’re bland… and incorrect. After all, the airport experience is of the ground, not the air.

By its very nature, the aviation industry is risk-averse, with innovation being adopted slowly

An important starting point was to consider the way the identity was going to be used. It would need to exist in a digital world; passengers would be engaging with it on screens and online. Hence the identity we created is contemporary, flexible and kinetic. The logo itself forms only part of the identity; its strength lies in how the elements – icons, colours, typefaces, illustration, imagery and tone of voice – come together to express the values and essence of the brand – delivering ‘Simplicity with a smile’.

This approach was perfectly demonstrated in the launch project, ‘Stories form the Street’. We invited street photographers from across Europe to collaborate in a large-scale exhibition within the passenger walkways. This was an unexpected artistic response to a problem of covering large areas of wall – the resulting images providing an antidote to the usual bland, obvious shots of tourist locations that airports usually resort to. Similarly, once construction on the terminal commenced we developed a campaign that used onomatopoeic words to express the changes that were taking place. We chose not to apologise, rather celebrate the new LLA that was about to be revealed. All the campaigns and projects we’ve worked on have been driven by ‘Simplicity with a smile’, and underpinned by the brand values.

It’s been four years since launching the brand and we continue to work as brand partners to the LLA team. We’ve been instrumental in rolling the new visual identity out across the entire airport: vehicles, corporate communications, internal and external campaigns, exhibitions, advertising, signage and environmental graphics – and continue to provide creative direction for design partners across many projects.

Russell Holmes has an MA in Communication Design and over 25 years experience in branding and design, working with many of the world’s leading brands. As Strategy Director, he has been instrumental in developing the brand for London Luton Airport, working alongside the team at the airport for over five years. 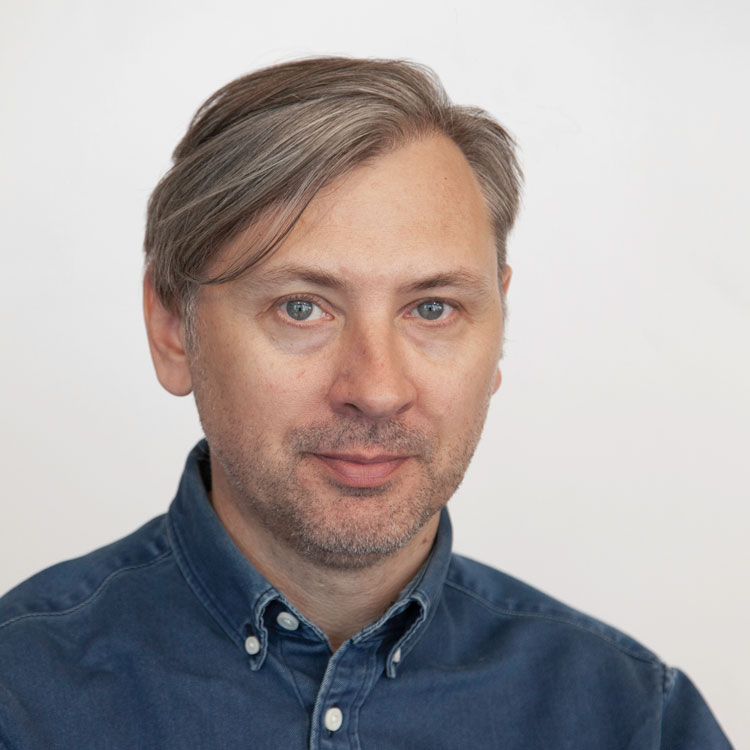 One response to “Strategically positioning London Luton Airport for growth”