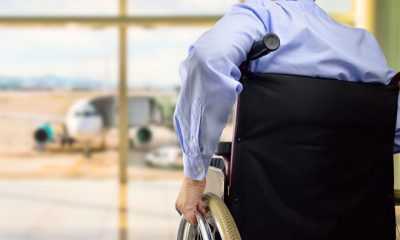 Why PRM Management is a crucial yet impossibly complex service for airports to get right – and why things have suddenly started to change?

“PRM”, which stands for “Passengers with Reduced Mobility”, is one of the names used to describe the free service European airports, who since 2008 have been legally bound to offer to all passengers with reduced mobility who ask to be taken safely to and from their plane within the airport. PRM is also known under a variety of other names, from “Special Assistance” to “Mobility” through to “Wheelchair” services.

Though many people work at large airports, only a minority work directly for the airport itself or its airline clients. That is because airports are world experts at outsourcing services on an industrial scale via a wide array of service providers. Most people one sees working at an airport actually work for service providers who have been awarded 3 to 5 year contracts by the airport or the airlines via tenders. These range from “Handlers” who man many of the check-in desks and departure gates at the airport (even if they wear an airline uniform), to baggage, security checkpoint and aircraft turnaround handlers (who see to it aircraft are refuelled, filled with food, luggage and freight, de-iced, etc).

Yet, PRM is fundamentally unlike any other airport service. In fact, it is universally known as the one truly fiendishly complex, if not impossible, service to deliver regularly on time, at the required quality level or according to budget. Industry wisdom has it that if you can run PRM reliably, you can run any service on earth.

What, one may well ask, makes PRM so horribly difficult to master? And why does it matter ?

Let’s start with why PRM is so important. Legally, no plane can be turned around until all PRM passengers have been disembarked and this can only be done by specially trained personnel employed by PRM providers. Until a qualified agent arrives to disembark the plane’s PRM passenger(s), the plane can’t be cleaned or take on new passengers.

The plane’s next departure slot is at risk as are its daily objective trip goal and the punctuality of all of its flights. This in turn impacts the airport’s slot schedule. If, as is likely, the plane is late as a result, the cost to the airline for being late to leave its gate will bite into its profits. One begins to see the severe damage that just one late PRM passenger can make to a plane’s daily schedule. This is even more true for low-cost airlines whose business model depends on faster turnaround times to enable more flights per aircraft per day.

But when things spiral out of control, it isn’t one, but many planes that run the risk of being late. There is also the sensitive question of the PRM passenger’s experience. On the one hand, PRM passengers can suffer greatly as a result of their dependency upon others: when they are late and miss a plane, the impact on them can be many times more traumatising than it would already be for a completely mobile passenger. This is unbearable from a human point of view and dangerous from a PR corporate standpoint as bad publicity can rapidly ensue with dire commercial consequences as the media love to dwell on such incidents.

Second, why is PRM so hard to master ? The answer is that it is a fundamentally unpredictable activity.

The very high volatility of the things PRM assistance depends upon on but has no control over threaten to, and frequently do run havoc with the daily activity: change of gate, switch from jet-bridge to ambulift boarding/un-boarding, SSR type change (classification of the degree of mobility of a passenger ), volume of last-minute un-notified “ad-hoc” passengers, no-show passengers, to mention a few. The pressure rises all the time like milk about to boil : weather provokes delays, accentuating the situation. A large plane comes in with 10 unannounced PRM passengers. Others planes land without its notified PRM passengers showing up. And so on.

One begins to understand why running a PRM service at a large international airport is not for the fainthearted: it is a little-loved service that frequently turns to disaster from the point of view of passengers, airlines, the airport and the company providing the service. All have learned to fear PRM. If this sounds excessive, consider the following :

These challenges are magnified by demographic trends such as an ageing and increasingly overweight and therefore less healthy, population.

This is apparent in the numbers:

PRM passenger growth everywhere is dramatically outpacing overall air travel growth : when large European airports register 3 % annual passenger annual growth, their PRM growth is usually in the 10 to 15 % range. This may sound marginal – it isn’t. It means airport will see their PRM passenger traffic double every 4 to 5 years! The consequences of this discrepancy on PRM passenger service is dramatic because the airport tax that finances PRM services is levied on airlines on the basis of overall traffic growth, not PRM traffic growth.

You would think that faced with such dynamics most airports would take the bull by the horns and take strong measures to ensure PRM services are managed to a particularly high level, would rein in the poor discipline of airlines with dismal pre-notification records, ensure crucially important IT systems are chosen to absorb the activity’s structural unpredictability and accelerate active collaboration between airlines, airport and service providers to slowly but surely improve service outcomes. What has happened in the last few years has been the opposite – denial : “everything is just fine” airports would and still say publicly as the situation deteriorates. This situation is now widely understood by many national airport supervisory bodies in Europe, organisations who represent PRM passenger’s interests and many airport-user exchange groups.

The good news is that things have recently taken a dramatic turn for the better. A few visionary airports have recognised that the traditional model of PRM service provision is broken, unsustainable and very costly in human, financial and reputation terms. They have taken dramatic action with the results starting to show the massive benefits of getting it right. As the omerta about poor service starts to give way and some airports show how things can be dramatically improved, the whole scene is starting to change rapidly. Such airports include Paris Airports CDG and Orly, Brussels airports and now Oslo airport where visionary and forward thinking teams at both the airport and provider level decided it is time to make PRM work effectively.

Thanks to what these forward-thinking airports have done and proved with their very real trusted data, all airports can now do quite easily and rapidly with major initial implementations taking just 3 months at the biggest airports.

Now, airports can no longer say they don’t know a solution is at hand to make things right.