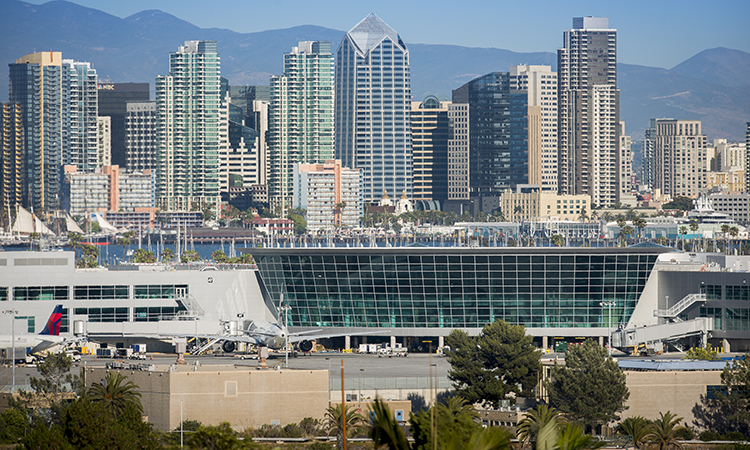 Sustainability has become an essential strategy for many businesses across the globe, including airports, as a means to better manage their opportunities and risks. Sustainability is a three-legged stool that stands on environmental conservation, financial strength and social capital. All three components are absolutely necessary for an airport’s long-term success. More than ever, these three metrics also allow organisations like the San Diego County Regional Airport Authority, which operates San Diego International Airport (SAN), to function as an enduring and resilient enterprise.

At SAN, our legacy of sustainability leadership has made us more resilient”

Resilience, in particular, has been a valued attribute these days. Resilience is defined as “the capacity to recover quickly from difficulties; toughness.” At SAN, our legacy of sustainability leadership has made us more resilient. It has bolstered our efforts to recover from the COVID-19 pandemic and has helped to begin the process of restoring our passengers’ confidence in air travel. Over the years, our resilience has helped us to:

Below are just a handful of important sustainability initiatives that SAN is implementing to create a more resilient airport and region.

Global and regional economies have been severely impacted by the COVID-19 pandemic.  According to a recent report from the San Diego Association of Governments, the region’s unemployment rates were especially impacted by the pandemic and remained higher than they were during the 1991 or 2008 economic recessions. Current estimates are that the 2020 Real San Diego Gross Regional Product will be between 3.1 per cent to 4.5 per cent lower than in 2019, representing $7 to $10 billion in economic loss.

SAN’s estimated direct and indirect economic contribution was nearly $12 billion annually to the local economy, prior to the pandemic”

It is well known that airports generate important benefits for their respective regions’ economies.  SAN’s estimated direct and indirect economic contribution was nearly $12 billion annually to the local economy, prior to the pandemic. Unsurprisingly, airports will be critical to their regions’ economic recovery. SAN is finalising the design of its Airport Development Programme (ADP), which focuses on the replacement of the 54-year-old Terminal 1 with a more modern, comfortable and efficient terminal facility, coupled with airfield and roadway improvements. The ADP is expected to be implemented in late 2021 at a total project cost of about $3 billion, which would significantly help to stimulate the region’s economy and create vital local jobs. In addition, the project will help SAN to attract air service to new destinations, thus better connecting the local economy to other domestic and international markets.

The ADP also generates important opportunities for disadvantaged businesses, which have been especially impacted by the COVID-19 pandemic. These businesses include all women- and minority-owned and service disabled/veteran-owned small businesses in San Diego County. There is already a robust Small Business Development Programme to ensure that these enterprises have every opportunity to do work at SAN, through monthly trainings, local business certifications and opportunity networking events. Over the past decade, the programme has helped to create $750 million in construction contracts for local businesses and $250 million in contracts for small businesses. 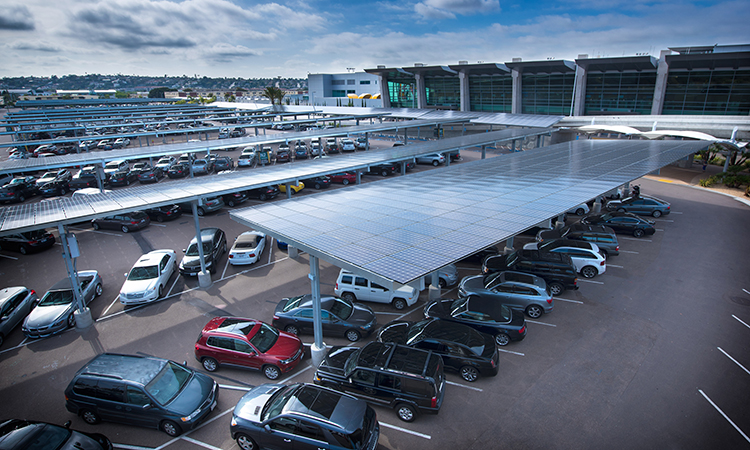 Social equity and environmental justice every day at an airport

A Small Business Development Programme is a great example of a social sustainability initiative that an airport can pursue, but there are numerous other opportunities, as well. One area of focus at SAN is improving air quality for airfield workers, through the conversion of Ground Support Equipment (GSE) to cleaner, alternative fuels. Through an industry-leading partnership between airlines and SAN, airlines have committed to transitioning over 80 per cent of their approximately 850 GSE at the airport to alternative fuels – mainly all-electric and renewable diesel – in the next three years. SAN is doing its part by investing in the expansion of airside chargers, so that every aircraft gate is equipped, on average, with four charging ports to support the new zero-emission GSE.

As part of its ‘SAN Green Concessions’ certification and recognition programme, the airport has partnered with its concessions to implement a very successful food donation initiative”

For air quality more broadly, SAN is partnering with the San Diego Association of Governments, which leads regional transportation planning, to improve public transit options to the airport. In fact, the Airport Development Programme was specifically designed to ensure that an area in the SAN terminal area is preserved to accommodate a station for a high-frequency, fixed-rail transit connection. This ‘transit-ready’ area creates a premium location for passengers to access the new Terminal 1 and existing Terminal 2 in the future. In the near-term, SAN will be launching a new all-electric shuttle service in early 2022 to connect with the regional light-rail system to more immediately increase airport public transit ridership, alleviate congestion on surrounding streets and reduce tailpipe emissions. Just as important, the new shuttle will provide the 9,000 workers at SAN, many of whom rely on public transit for their daily commutes, with a cleaner and faster way to get to work.

SAN, like most airports, offers its passengers a variety of concession options in their terminals, including food and beverage storefronts. As part of its ‘SAN Green Concessions’ certification and recognition programme, the airport has partnered with these concessions to implement a very successful food donation initiative. The effort collects excess edible food through weekly concession pick-ups and delivers them to the airport’s United Service Organisations (USO) facility and the San Diego Rescue Mission, which support military personnel and the homeless in the region, respectively. In 2019, this initiative helped to facilitate the donation of 134,000 meals and meaningfully contributed to the airport’s social sustainability. 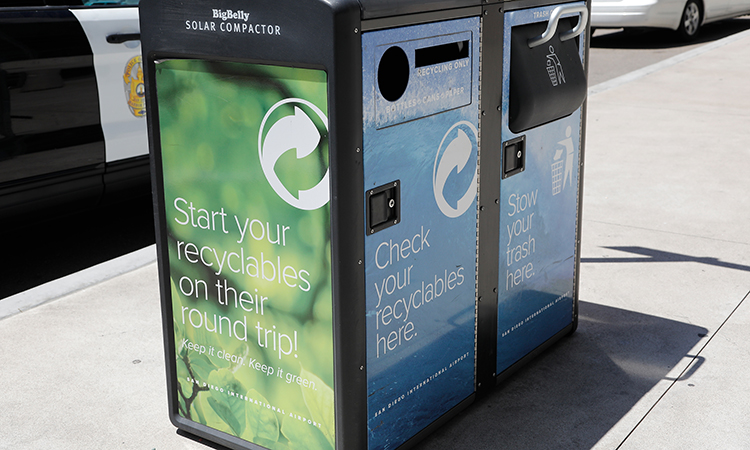 Climate readiness at an airport

A key resiliency focus for SAN over the past several years has been related to climate change, in terms of reducing carbon emissions and preparing for its impacts. The SAN Carbon Neutrality Plan and SAN Climate Resilience Plan are the cornerstones for the airport’s work, and the ‘Carbon Neutral’ (Level 3+) certification achieved by SAN through the Airports Council International’s (ACI) Airport Carbon Accreditation (ACA) programme is a testament to its progress to date.

A key resiliency focus for SAN over the past several years has been related to climate change, in terms of reducing carbon emissions and preparing for its impacts”

The frequency and severity of extreme heat, coastal flooding and intense rain events in San Diego are expected to further increase in the future. All proposed SAN capital projects are now designed to ensure that they can adapt to these new stressors. For example, the building pad elevation for SAN’s new Airline Support Building was purposely raised to withstand sea level conditions that are expected in 2100. Resiliency design features being considered for the new Terminal 1 include dual-plumbing restrooms to utilise non-potable water for toilet flushing; upsized HVAC systems to accommodate higher-than-normal cooling demands; and expanded onsite solar photovoltaic and battery energy storage systems. Finally, SAN’s new airport administration building will be one of the first airport projects to pursue certification under the U.S. Green Building Council’s RELi rating system, which takes a holistic approach to resilient design.

SAN has been redefining how it manages water resources, while preparing to accommodate passenger growth and a changing climate. The centrepiece of this new water stewardship approach is harvesting stormwater for on-site reuse. The Terminal 2 Parking Plaza, which opened in 2018, was the first airport project to include a stormwater capture and reuse system that diverts rainwater for use in the Central Utility Plant’s evaporative cooling towers. With the recent installation of a three million gallon cistern on the northside of SAN’s campus and another one proposed as part of the Airport Development Programme, it is estimated that SAN will eventually be able to collect, store, treat and reuse over 40 million gallons of stormwater annually, thereby reducing the airport and region’s reliance on imported water supplies. 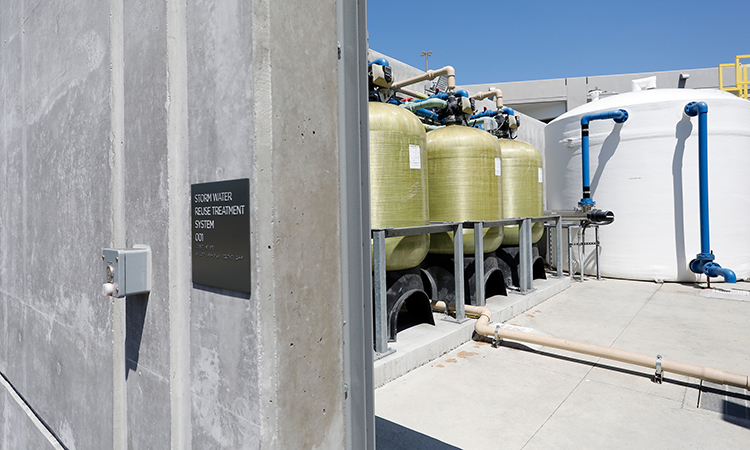 SAN is committed to being one of the most sustainable airports in the world, and that commitment is helping us to bounce back from one of the worst public health crises in modern times. The sustainability initiatives highlighted above are also helping SAN to prepare for other ‘shocks to the system’ in the future, which are inherently unpredictable and inevitable.

Brendan Reed is the Director of Planning & Environmental Affairs for the San Diego County Regional Airport Authority, which operates San Diego International Airport and plans for the region’s long-term air transportation needs. As a senior member of the airport’s Development Division team, he is responsible for guiding the organisation’s policies concerning airport land use compatibility and airport master planning, corporate sustainability, environmental compliance and noise abatement. Reed is a Certified Member of the American Association of Airport Executives and currently serves as the Chair of the Airports Council International-North America’s (ACI-NA) Environmental Affairs Committee. 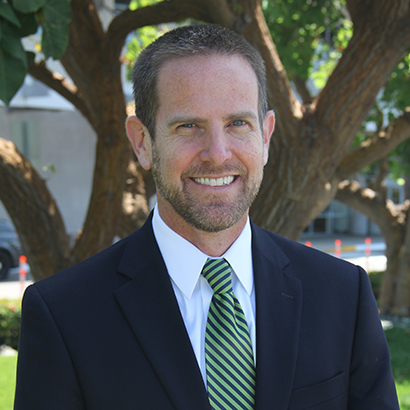