McAvoy has already been shortlisted for two industry awards for the Dublin Airport project and its innovative use of BIM and virtual reality. 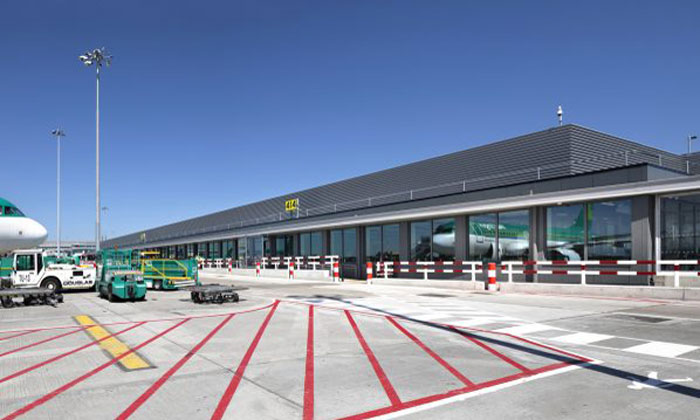 MODULAR BUILD: The facility was built more than 80 miles north of Dublin

The McAvoy Group has handed over a new passenger facility at Dublin Airport which was built offsite and at over 19m wide, is believed to be the largest single span modular building delivered to date in the UK and Ireland.

The new €22 million South Gates passenger boarding area has been developed to meet the growth in passenger numbers at Dublin Airport and will be used mainly by Aer Lingus for flights to the UK and continental Europe. It provides seven boarding gates to serve nine aircraft stands and is designed to accommodate around 8,000 passengers a day.

The management contractor for the project was Flynn Management & Contractors and the lead consultants were Arup. The building was designed by concept architects Kavanagh Tuite and delivered by project architects Blue Sky.

The 2,200m2 facility was constructed offsite at the McAvoy production centre in Lisburn, Northern Ireland to reduce time on site. It was craned into position in 16 days as 77 steel-framed modules. The building system was engineered to achieve over 19m wide uninterrupted clear spans, which is believed to be an industry first for modular construction.

Hot rolled steel beams were used to remove the requirement for internal columns.

The building, which is around 120m long, has the flexibility to accommodate departing flights in the busy early morning period and flight arrivals in the evening. It can also be segregated so around 1,000 departing and arriving passengers can be processed at the same time.  Facilities include boarding gates, a café, toilets, baby changing and a workstation area with plugs and charging points.

Dublin Airport has experienced a 6 per cent increase in passenger numbers in the past year and a record 29.6 million passengers used the airport in the last year.

Commenting on the new facility, Iain Heath, Project Manager at Dublin Airport, said: “This is one of the fastest projects we have ever completed at the airport – from planning to the first flight in just 18 months. The finished building speaks for itself. It is a handsome new facility with high quality finishes and clean architectural lines.”

“We were working to a very constrained programme to have the building operational ahead of the busy summer season. The project and its innovative use of offsite construction is a fantastic achievement for the whole team.”

“We were impressed with how McAvoy used BIM and virtual reality. As an airport we have a complex approvals process, but the digital techniques allowed the senior management team to ‘walk through’ the building and to experience the facility, which facilitated design sign off. In addition to the programme benefits, offsite construction also meant fewer trades working on site and a smaller site footprint. This approach had far less operational impact for the airport and the closure of fewer aircraft stands with reduced time frames.”

Brian Looney, Contracts Manager at Flynn Management & Contractors, said, “The principal driver for offsite construction was to reduce the programme. The McAvoy solution allowed the building to be delivered to site within weeks of planning approval. Having fewer trades on site is also a benefit for airport projects such as this where the site is very constrained, and the highest standards of security have to be maintained at all times.”