Posted: 11 May 2018 | International Airport Review | No comments yet

Instead of a traditional ground breaking ceremony, the three main parties on the project buried a solid bronze hand shake, a water bottle made of recycled glass and an action plan for fossil fuel-free travel in a time capsule for future generations. 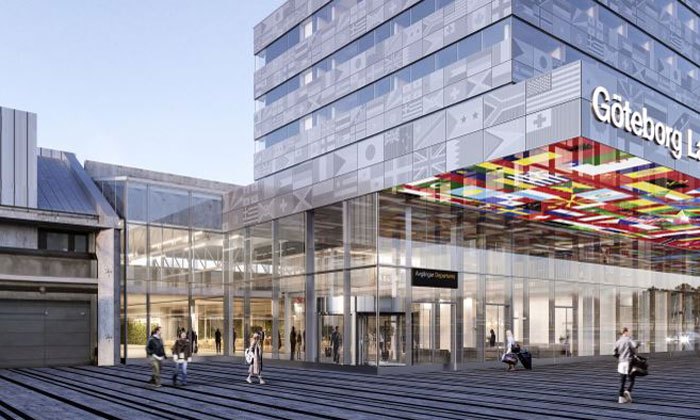 FOR THE FUTURE: The new seven-storey hotel at Göteborg Landvetter Airport Photo: Wingårdhs

Construction is now under way on both the north and south side of the terminal. The work includes preparations for a new, single security checkpoint, a new baggage facility that will house larger X-ray equipment and a new environmentally certified seven-storey hotel close to the terminal to be operated by Scandic.

“We continue to develop the Göteborg Landvetter Airport of the future as western Sweden’s gateway to the world, and we can do this very much thanks to the fine collaboration we have with stakeholders in the region. The hotel is an important piece of the puzzle since the hotel’s public areas will be integrated with the future check-in hall. The airport’s expansion is necessary to meet the need for the air travel of the future,” said Jonas Abrahamsson, president and CEO of Swedavia.

Instead of the traditional ground-breaking ceremony, Swedavia, the building contractor Peab and the hotel operator Scandic each placed their own item for the future in a time capsule. The capsule will be encased in cement for the new terminal building later on.

The hotel operator Scandic chose to bury a water bottle made of recycled glass and a text about how they view sustainability.

The building contractor Peab’s contribution to the capsule was an engraved handshake made of solid bronze.

“Almost exactly one year ago, fossil-free aviation fuel was used to refuel aircraft for the first time at Göteborg Landvetter Airport. But there is currently a limited supply. We want more companies, public institutions and private individuals to follow in our steps and buy bio fuel for their air travel. It is our hope that fossil-free fuel will be the only option in the future. Together we can make domestic air travel fossil-free by as early as 2030,” she said.

Total planned investment at Göteborg Landvetter Airport is expected to be 3 billion Swedish kronor (£260 million) for 2016-2025.