From the summer, a fleet of up to 200 all-electric Jaguar I-PACE vehicles will be available to passengers for use to and from the airport. 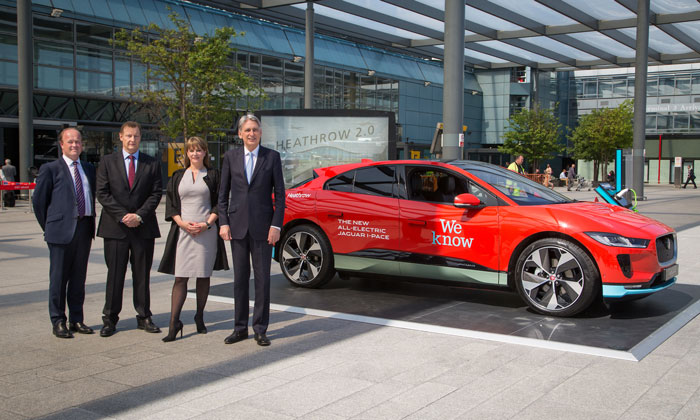 Heathrow, Jaguar and travel services company WeKnowGroup have signed a deal that will see a fleet of up to 200 fully-electric Jaguar I-PACE vehicles available to passengers for travel to and from Heathrow.

The service, to roll out in summer 2018, will create the largest chauffeur-driven fleet of electric vehicles in the UK. Initially the fleet will be made up of 50 I-PACEs available from summer 2018 with the option to add a further 150 cars in the next 12 months. This will support up to 1,000 electric vehicle journeys to and from Heathrow each day – saving over eight tonnes of NOx emissions each year. To support the service, WeKnowGroup will be installing a dedicated charging hub at Heathrow, which will be the largest in the UK.

Designed and engineered by Jaguar Land Rover in the UK, the all-electric I-PACE carries a state-of-the-art 90kWh Lithium-ion battery and capable of a range of 298 miles.

Emma Gilthorpe, Executive Director at Heathrow, said: “We are thrilled to be working with two British companies on this landmark initiative to support more sustainable transportation choices for our passengers.

“We will not compromise on our commitments to the environment and our local community and we remain focussed on addressing the impact road vehicles have on air quality on the roads around the airport. These I-PACEs are the latest in a long line of initiatives we are taking to ensure that we do not force a choice between the economy and the environment – and that we can deliver benefits for both.”

New research released by economic consultants CEBR has revealed the extent of forecasted EV take-up in London over the next decade and its predicted positive impact on air quality, given the impact road vehicles have on NOx emissions.

Following a number of announcements by car manufacturers, Government and the Mayor of London, the CEBR analysis showed that by 2030 up to 58 per cent of vehicles on London’s roads will be electric.

The introduction of the T-Charge for more polluting vehicles in October 2017, the Ultra-Low Emission Zone and falling purchasing costs for an electric vehicle are some of the main causes driving forward this forecasted shift, which will could result in the average concentration of oxides of nitrogen (NOx) across the city reducing by as much as 8 per cent.

Jeremy Hicks, Jaguar Land Rover UK MD, said: “What we have created in the Jaguar I-PACE is utterly revolutionary; a desirable, luxurious and state-of-the-art electric vehicle that’s practical for genuine everyday use, including the tough life of an airport luxury chauffeur car.”

“We have had huge interest and positivity from our customers worldwide. We’re also delighted that this endorsement extends to some of the biggest corporations on the planet. Through our partnership with Waymo (formerly Google self-driving car project) and this latest deal with Heathrow and WeKnowGroup, we’re excited to be bringing the electric future to more people than ever before.”

Consumer research run in parallel with CEBR’s study shows that by 2028, 63 pre cent of Londoners will feel comfortable making the switch to an electric vehicle, with falling purchase costs and an expansion of the charging point network likely to fuel widespread adoption. Londoner-based travellers to Heathrow 32 per cent said they would be fairly likely (22 per cent) or very likely (9 per cent) to use electric taxis to access the airport if these were made more available.

Peter Buchanan, CEO, WeKnowGroup said: “This is a significant step change in our successful, decades-long relationship with Heathrow where we operate arrivals desks in all terminals, to assist thousands of travellers every year.

“We provide transport as well as a broad range of other services including entertainment, hotel rooms, tours, attractions and telecoms products. Today’s agreement also extends our deep, long-standing relationship with Jaguar which has allowed us to proudly claim that we run the largest chauffeured executive Jaguar fleet in the UK. “