How do you save £100 million on a rail link between a city centre and its airport? With a mile-long moving walkway. 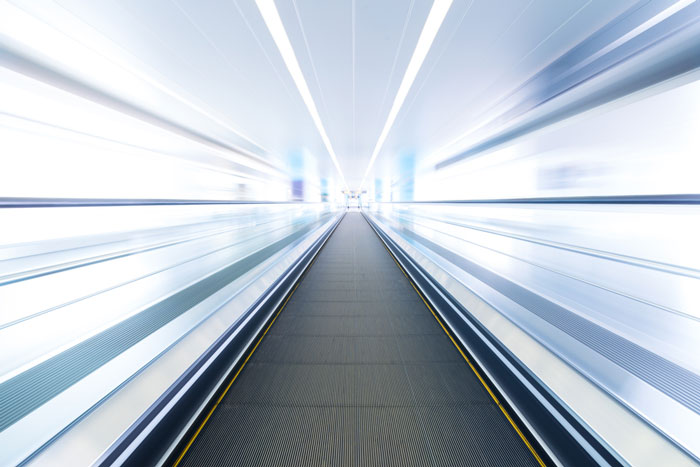 WALKWAY TO CHECK-IN: At just over a mile long, Mr Rodger's proposal would be nearly 50 per cent bigger than the current longest moving walkway

An architect has drawn up rough plans for a new Glasgow Airport station. The only problem is that the proposed location is around a mile from the front doors of the Scottish hub.

To solve this problem, Maurice Rodger suggested installing a fully-enclosed travellator of world-record length. This would save the local authorities more than £100 million, according to the 71 year old, bringing the price tag down from £144 million to just £10 million.

According to The Scottish Herald, Mr Rodger has drafted a scheme to build a station on the Glasgow-Wemyss Bay line, stopping near Ferguslie Park in Paisley, a town west of Glasgow where the city’s airport is situated.

From there passengers would step onto the moving walkway which would take them to the terminal in eight minutes.

Currently, the most direct way to Glasgow Airport from its city centre is on the Glasgow Airport Express, a 15-minute bus service. Flyers can also travel to Paisley Gilmour Street, just over a mile from the terminal, and take a bus. This makes it the biggest airport in the United Kingdom without a permanent rail link.

Authorities have been working for 30 years to build one. The idea was first sounded in 1990 but it took 16 more years before it had developed into a plan to extend the railway line from Paisley.

Issues were brought forward with this plan, including its cost, impact on amenities in the local area and the additional pressure it would put on an already crowded railway line.

To waylay these concerns, a proposition was instead put forward for a rail-tram link. In this instance, a tram service would diverge at Paisley Station to go on to Glasgow Airport via a light railway line, a measure which would apparently have reduced costs by more than £50 million and cut down on disruption to the town. This would take just over 16 minutes.

Mr Rodger’s suggestion would instead create a new station on an already existent line and link that station with a moving walkway.

In The Scottish Herald, he is reported to have been inspired by the Glasgow Prestwick Airport Station plan, a scheme in which he was involved when it was opened in 1994. Though at 670,000 passengers every year it is only 10 per cent the size of its neighbour, Glasgow Prestwick is the only airport in Scotland to have a mainline rail station. This station is accessible via a covered walkway, in the mode Mr Rodger suggested only significantly shorter.

The honour of longest moving walkway currently belongs to the Sydney Botanical Gardens, a 680-foot affair that travels right under the central business district of Australia’s biggest city.