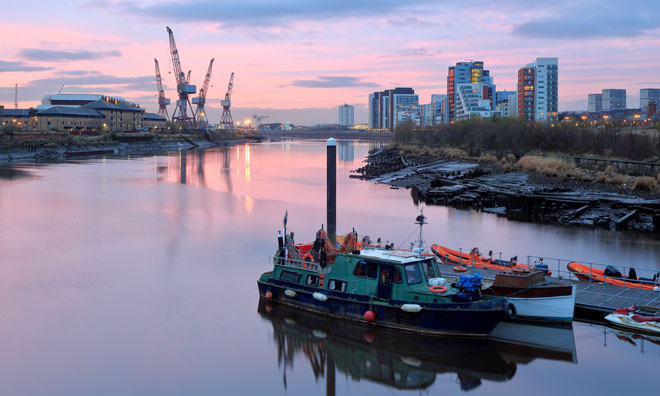 Glasgow Prestwick Airport welcomes a delegation from Houston Spaceport and Rice Space Institute to meet with representatives from the Scottish space industry and local politicians. The MOU will allow both parties to share relevant policies, processes and other information relating to commercial spaceport licensing and operations.

It also marks the start of a process to develop global ‘best practice’ for commercial space launch activities, safety and environmental standards.

Glasgow Prestwick Spaceport will be set to benefit from Houston’s existing agreements with NASA, which enable them to use NASA technology, research and resources in a commercial environment.

“We couldn’t wish for a more experienced partner than Houston. They have a long history of facilitating government funded launches and it is exciting to be embarking on the move to commercial space launches alongside them.

“This partnership will hopefully expedite the establishment of a spaceport at Prestwick, as soon as we have the guidance from the CAA, Dft and UK Space Agency on what a regulatory framework will involve for UK spaceports. We would anticipate that we will have this clarity at some point in 2017.

“Glasgow Prestwick developing a spaceport in Scotland will bring huge economic benefits – up to £320 million towards our economy. This is before taking account of the further added value that the spaceport, our partners in the developing aerospace campus around us and wider science in technology industries in Scotland can gain from having access to NASA research and resources.

“For us, the immediate focus will be working with our launch partners to provide lower cost access to space for the booming UK satellite and associated services industry in the UK and across the world. However, longer term, this partnership could develop in to a point to point for passenger travel using hyper sonic flight capability that will help to cut down journey times by a matter of hours.”

“The pioneers who first made inroads in space travel and space exploration began as contestants in a race, but soon realized that any hope of safely and efficiently reaching those goals would require productive and valuable partnerships,”

“As we begin the next steps in this ambitious endeavour, partnerships like this with the Glasgow Prestwick Spaceport will benefit everyone, and will strengthen not only our assets and technology, but also our resolve to make commercial space travel a viable and valuable tool for the future.”

“We see a lot of similarity between the efforts at Prestwick and those at the Houston Spaceport. Particularly exciting is the opportunity for the spaceports to act as catalysts to foster collaboration across the high-tech space, energy and medical industries: strengths that Scotland and Houston share. The direct engagement of Universities such as Glasgow, Strathclyde and Rice create additional opportunities for promoting innovation in research and education.”