Airports across the world adopt the new app technology

The “Community app” – conceptualised by Gatwick for the airport industry – has been shortlisted for seven UK national awards. 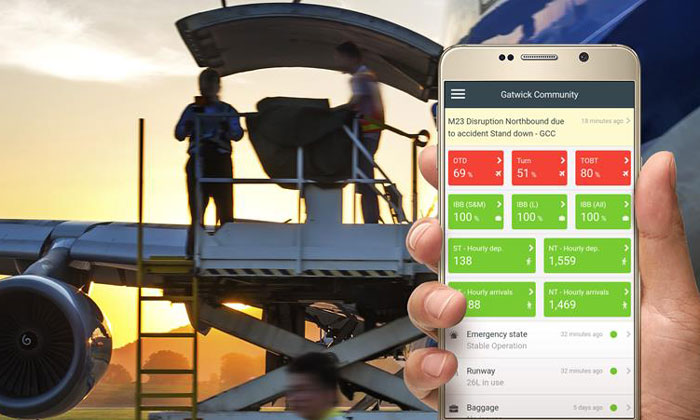 The application was launched at Gatwick in early 2016 – creating a new industry trend – and gives the entire workforce that currently use it easy access to real time information about airport issues on their smartphone.

Gatwick staff make up 25% of the current 10,000 users at the airport, with the remaining staff working for other entities on the airport campus including airlines, ground handlers, retailers, tenants, police and immigration services.  Most staff have downloaded the “Community app” on their personal smartphones.

Typically large airports are a collection of organisations but the “Community app” has brought Gatwick’s airport community together, fostered an airport-wide data sharing culture and instilled a sense of competition – with airlines and baggage handlers now keen to top the on-time-departure or bag delivery performance league – all of which improves the service Gatwick’s passengers receive.

Gatwick devised the “Community app” concept in partnership with AirportLabs. From the outset it was designed and built as a digital platform which can be used by multiple airports. AirportLabs now offer this as a fully managed service to any airport in the world. The “Community app” was launched at Gatwick in early 2016 and has since been rolled out at 12 other airports across the world, including Edinburgh, Bristol and Milan Airports.

A film explaining the “Community app” and its benefits can be viewed here.

“Gatwick is among the top 5 airports in the world, when it comes to technology innovation. The Airport “Community app” is one of the ideas we have pioneered for the wider airport industry and it has become a great success.

“The app helps us to keep the entire workforce on campus in tune with the airport. About 10,000 employees from 250 entities use the app at Gatwick. I am delighted to hear that Gatwick has been shortlisted for these awards and look forward to hearing the final results.”

“SEA – Milan Airports invests a lot of energies and resources in technology innovation. The Airport Community app is one of the initiatives that we analyzed with great interest since the early days of its availability on the market. Soon after, we decided to adopt it for the great opportunities and potential benefits that the App could bring to our internal operative processes and activities”.

“Seeing the success of the Community app deployment by Gatwick, we implemented it at Edinburgh in the summer of 2016.  The Community app has quickly become the primary channel for cross campus communication. Edinburgh has then introduced additional functionality such as fault reporting and real time security queue times on the Community app, which is now available for other airports. This illustrates the value of collaboration among airports on multi-airport platforms”.

Gatwick’s “Community app” has been shortlisted for three Lloyds Bank National Business Awards, with the results announced on 14 November 2017:

And for four Digital Impact Awards, with the results announced on 17 October 2017: