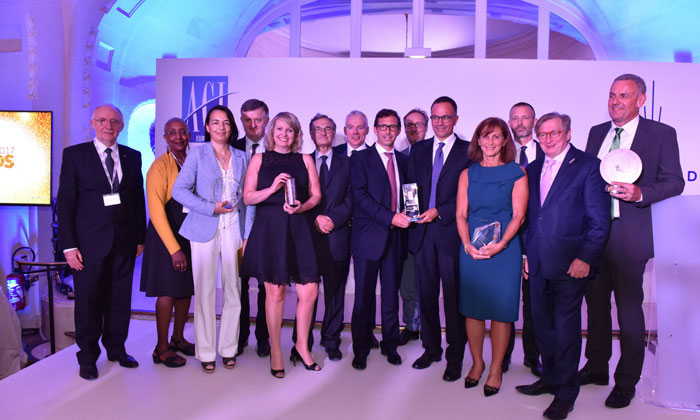 This years’ judging panel for the ACI Europe Best Airport Awards was drawn from a well-respected group of independent experts including the European Commission, European Civil Aviation Conference (ECAC), FlightGlobal and Air & Cosmos. ACI Europe counts over 500 airports in 45 European countries among its membership and this year’s competition saw a high level of entries in the competition in each category.

The Awards cover 4 categories of airport and aims to recognise achievement in core activities such as customer service, facilities, retail, security, community relations and environmental awareness and operations.

IN THE ‘UNDER 5 MILLION PASSENGERS’ CATEGORY

The first award, recognising airports in the ‘under 5 million passenger’ category, went to Cork Airport. The judges valued the improvement of the airport facilities and use of innovative technologies (e.g. advanced parking solution, queue measurement system) along with its investments in safety and staff recognition schemes. The airport’s success in attracting new routes, most notably the achievement of securing the first low cost Norwegian transatlantic service and its innovative approach to airlines customer service through the “Coalition of the Willing” initiative, also impressed the jury.

Olbia Costa Smeralda Airport was highly commended in this category.

IN THE ‘5-10 MILLION PASSENGERS’ CATEGORY

The winner of the ‘5-10 million passenger’ category was Naples International Airport. The judges singled it out for the airport’s excellent combination of smart airport management working with tourism development, recognising the airport as a great economic driver of regional tourism. The judges also appreciated the airport’s significant improvements to the passenger experience.

The highly commended airport in this category was Bristol Airport.

This year’s award in the ‘10-25 million passenger’ category went to Alicante-Elche Airport. The airport has recorded a remarkable performance: its customer service to airlines with incentive schemes and marketing offers made it possible for Alicante-Elche Airport to open 38 new routes and add 9 new airlines. The judges also highlighted the airport’s improvements to its facilities, in particular its efforts to cater to different categories of passengers, such as children and persons with reduced mobility (PRM), and to improve passenger flows at security control areas. In addition, the judges cited the airport’s focus on boosting public transport connections and its improvements in operations, namely in runway safety and advanced tower projects to improve punctuality.

The highly commended airport in this category was Hamburg Airport.

In the category for airports with ‘over 25 million passengers’, this year’s ACI Europe Best Airport Award went to Adolfo Suárez Madrid-Barajas Airport. The airport won praise from the judges for its outstanding achievements in all domains with particular reference to its excellent strategy to boost the air connectivity between Europe and South America and to the continuous introduction of advanced technical innovations. The judges noted, in particular, the airport’s achievements in safety management as well as improvements in the passenger experience, including monitor queuing times at security checks, live music, art exhibitions and its Personal Shopper Service. Its diverse initiatives on the environment and on community relations that the airport has put in motion also impressed the judges.

The Eco-Innovation Award is adjudicated by the independent Advisory Board of the carbon management programme, Airport Carbon Accreditation, which was launched by ACI Europe in 2009. This Award specifically recognises airports’ outstanding environmental performance, in particular, innovative approaches to environmental management.

This year’s Eco-Innovation Award went to Munich Airport (currently Airport Carbon Accredited at Level 3 Optimisation) for its comprehensive and systematic approach to environmental management and sustainability across all its operations and in relation to all its impacts. The jury was impressed by the airport management involvement strategy, including the correlation between management remuneration and sustainability KPIs. The judges also underlined the airport’s cooperation with stakeholders, for instance within the framework of the Aviation Initiative for Renewable Energy Germany (aireg), which promotes the research, production and use of sustainable alternative fuels for aviation. Another area of particular innovation that was highly regarded by the jury was the airport’s biodiversity engagement through measures to protect flora and fauna at and around the airport. The airport is also implementing extensive noise and emissions monitoring, including bio-monitoring of air quality.

Budapest Airport was highly commended for this Award.

As part of a Memorandum of Understanding signed by ACI Europe and the European Disability Forum (EDF) last year, the Accessible Airport Award was also presented. The Accessible Airport Award aims to honour the best airport in Europe in terms of its level of accessibility as well as the range and the quality of the assistance services that it offers. It is also intended to encourage other airports to continue their work on removing the barriers that people with disabilities and persons with reduced mobility (PRM) can still face when travelling by air.

The judges considered that the airport stands out for its remarkable accessible friendly initiatives, namely in terms of boarding equipment (e.g. the “Eagle lift” facilitates the boarding of wheelchairs) and in terms of the level of accessibility with regard to check-in machines and E-Gates.

The judges noted that Larnaka International Airport offers interesting additional features, such as sockets for electric wheelchairs, a free parking for 120 minutes and cooperation with Senior Travel Groups that have expertise on PRM accessibility, as well as much improved accessibility features on the airport website.

The judging panel for the Accessible Airport Award was comprised of the European Disability Forum’s Executive Committee members as well as Mr. Herald Ruijters, Director for Investment, Innovative & Sustainable Transport at the Directorate General for Transport (DG MOVE) European Commission.

This year, a special ACI Europe HR Excellence Award was created to recognise individuals who have demonstrated excellent leadership and human resources management among the ACI Europe Regular Members. The objective of this new annual award is to give exposure to excellence that will help the airport community to better assess and implement the new procedures and skills needed to develop the industry’s workforce, looking at the various challenges facing HR Directors and airport leaders, such as mobility, succession planning, training, well-being and digitalisation.

The HR Excellence Award went to Paula Stannett, HR Director at Heathrow Airport, for her demonstrated excellence in human resources and her leadership acumen. Paula was also honoured for investing heavily in increasing staff engagement to positively transform the workplace culture. In this regard, the judge emphasised the focus of Heathrow’s ‘’MOJO” initiative on catering to employees’ needs and helping them fulfil their potential while inspiring their peers to champion change and efficient service delivery.

The World Business Partner Recognition Award went to Catherine Mayer, Vice President SITA, in recognition of her long-lasting membership service marked by passionate dedication and exceptional commitment to increasing synergies across the airport industry and promoting an innovative, digitalised era for air travellers. Her vast expertise together with her charismatic participation in ACI activities have successfully contributed to leveraging the profile and impact of airports.

The 28th ACI Europe General Assembly, Congress & Exhibition will be hosted by Brussels Airport and will take place in Brussels on 18-20 June 2018.