An agreed partnership between EUROCONTROL’s Maastricht Upper Area Control Centre (MUAC), the Belgian Ministry of Defence and skeyes, will see the development of a new air traffic management system. 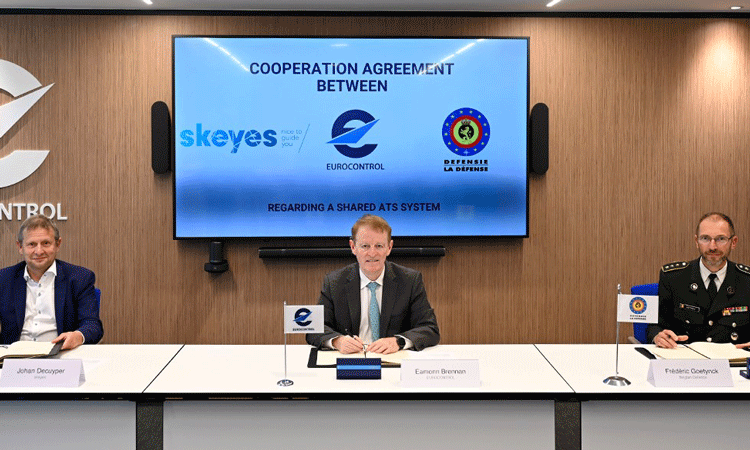 The three partners signed an agreement to this effect on 27 September 2021. This development will make air traffic control in Belgium even safer and more efficient.

Air traffic control services in Belgian airspace are currently provided by three independent organisations using two different systems. skeyes manages air traffic at the Belgian airports and in the airspace up to about 7.5km, using the Eurocat air traffic control system. Traffic in the upper airspace (above 7.5km or 24,500ft) is handled by MUAC, which is located in the Netherlands. The Ministry of Defence deals with all military air traffic at and around the military airports, as well as in the training zones made available for that purpose. The Ministry of Defence and MUAC are already using a joint ATC system, known as the Shared Air Traffic Services System 2 (SAS2).

The fact that all air traffic management organisations in Belgian airspace will be using the same system is a real breakthrough in air traffic control in Belgium. The biggest gain lies in the real-time exchange of air traffic data between civil and military air traffic controllers, that will lead to increased safety and a more efficient use of airspace, resulting in fewer delays and greenhouse gas emissions.

In the agreement, the three partners also lay down provisions for contingencies, i.e. solutions in the event of incidents, that will ensure maximum safety and business continuity in Belgian airspace.

Eamonn Brennan, Director General at EUROCONTROL said: “The fact that Belgium – the host country of EUROCONTROL’s headquarters – takes this important step towards the Single European Sky concept of ATM data service provision is highly symbolic. I am delighted to sign this co-operation agreement with our Belgian partners and take a step forward in service provision co-operation.”

“The shared ATS System is based on a proven Virtual Centre Concept developed and deployed by MUAC and the Royal Netherlands Air Force in 2013 across various sites in the Netherlands, trialled in Slovenia and implemented with the Belgian Air Force since 2019, ” commented John Santurbano, Director of Maastricht UAC. “The system is robust, and we have every confidence that our Belgian colleagues have made a good choice. As the MUAC system is upgraded and further developed, the improvements will automatically flow to the Belgian air traffic control sites served from MUAC, securing economies of scale through common development and maintenance resources. An additional spin-off of this project is that at MUAC, the knowledge base will cover not only civil upper and lower but also military airspace and functionalities.”

The Ministry of Defence of Belgium added: “The deployment of a joint ATM system (SAS3) in Belgian airspace is one of the main cornerstones of the Belgian Airspace Vision 2030. Our positive experience with SAS2 – with special attention to the functionalities specific to the military – will certainly contribute to a successful implementation. This strategic and operational choice confirms current and future civil-military cooperation.”

“We can confirm the benefits. The fact that the three air navigation service providers in Belgian airspace will be working with the same system will ensure smoother coordination and communication, which in turn will benefit flight safety,” said Lieutenant General Frédéric Goetynck, Director General of the Directorate General Material Resources and Major General Thierry Dupont, Commander of the Air Component of the Belgian Defence Force.

Johan Decuyper, CEO of skeyes further commented: “The ATM en-route system is the core of our activities, with which we ensure air traffic safety. Our civil and military air traffic controllers and MUAC colleagues are working on it 24/7. It is therefore difficult to overestimate the importance of this investment, both financially and operationally. SAS3 is one of the ‘future-proof’-projects of skeyes, together with digital towers and drones. These are innovative and strategic investments for the future. This is how we stay on track to keep on playing our role in air traffic control in EU.”