Designed to soothe nervous fliers and passengers with hidden disabilities, the therapy dogs are now a semi-permanent feature at Southampton. 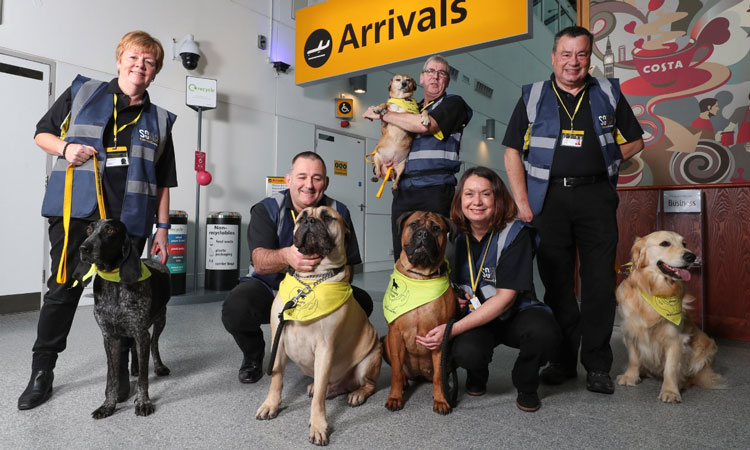 Following a successful trial in 2019, Southampton International Airport (SOU) has announced that the ‘Canine Crew’ – a pack of therapy dogs from the charity Therapy Dogs Nationwide – will join the airport on a semi-permanent basis.

The trial saw the dogs stationed in the arrivals hall, as well as the departures hall, with their volunteer handlers. Due to its success, they will now be on patrol once a week, aiming to help to soothe nervous fliers and passengers with hidden disabilities.

Head of Passenger Operations at Southampton International Airport, Simon Young, said: “Having therapy dogs in our airport will not only benefit our passengers, but also our staff. Four-legged companions are well known for boosting general happiness and well-being, as well as mood, and we are very excited to welcome them to the Southampton Airport family. Our sister airport in Aberdeen was the first in the country to trial airport therapy dogs and we are happy to be carrying on that legacy.”

The therapy dogs are fully temperament tested and highly experienced in their abilities. The launch at the airport coincided with a charity collection for national pet charity, Blue Cross, which has a re-homing centre in West End, Hampshire.

Paulette Hockley, Placement Officer at Therapy Dogs Nationwide, said: “We are very privileged to have passionate volunteers who keep our charity running by taking their own dogs into establishments to give comfort, distraction and stimulation. We are looking forward to working with Southampton Airport and sharing the benefits of animal assisted therapy with both passengers and team members.”