Rika Ito, Manager of the Environmental Management Group at Kansai Airports, details the commitment being made to address environmental issues and the advantages of working collaboratively between the three airports under the group’s operation in the next instalment of International Airport Review’s exclusive series. 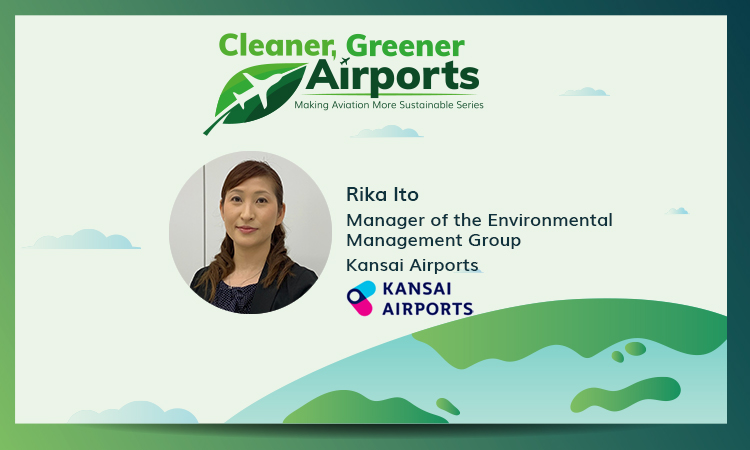 As public infrastructure that serves as gateways to communities, airports make peoples’ lives convenient and contribute to the communities’ economy. However, they also create a negative environmental impact on those surrounding communities. We, Kansai Airports Group, believe that we have a great responsibility to address environmental issues at both local and global levels, and we are looking to reduce our environmental impact and promote harmonious co-existence with our communities.

In 2021, Kansai Airports Group set a long-term target of achieving net zero greenhouse gas emissions (GHG) by 2050. We aim to cut emissions by 40 per cent in the fiscal year (FY) 2030 compared to the FY 2016 level, and then to reach net-zero emissions in the FY 2050. In FY 2019, we’ve already reduced our CO2 emissions by 12 per cent, from 113,000 tonnes in FY 2016. By steadily advancing environmental initiatives and observing trends in technologies and innovation, we aim to contribute to the realisation of a carbon neutral, decarbonised society through airport operations.

Of our three airports, KIX and UKB are offshore airports. KIX is an international gateway airport operating round-the-clock, ITM is a key domestic airport located in an urban area and UKB is a domestic airport that complements the functions of KIX and ITM to meet air travel demand from the neighbouring communities. Since the roles of these airports are different, we are advancing environmental initiatives according to each airport’s characteristics. By sharing experiences, knowledge and challenges across the airports, we are making our activities better.

Kansai Airports Group steadily implements environmental measures by improving the efficiency of equipment, plants and building insulation and optimising day-to-day operations. We share information on an energy dashboard that utilises a building energy management system (BEMS), analyses data of air-conditioning and heating systems and regularly conduct an energy-saving patrol participated by airport staff. These activities help to raise environmental awareness among employees and make energy-saving improvements in operations. Furthermore, we are systematically upgrading to LED lighting to improve energy efficiency and installing brightness and motion sensors according to the needs of each location to further reduce energy consumption.

Use of clean energy

We are encouraging the use of new and renewable energy at each airport. KIX uses electricity produced by small wind turbines for street lighting and promotes the installation of solar panels for captive consumption. In January 2020, a total of 4,180 solar panels were placed on the roof of KIX Terminal 2 and began power generation, which is expected to cut annual CO2 emissions by around 600 tonnes. The airport also has a mega-solar system with 72,560 solar panels, which generates power of 12MW. 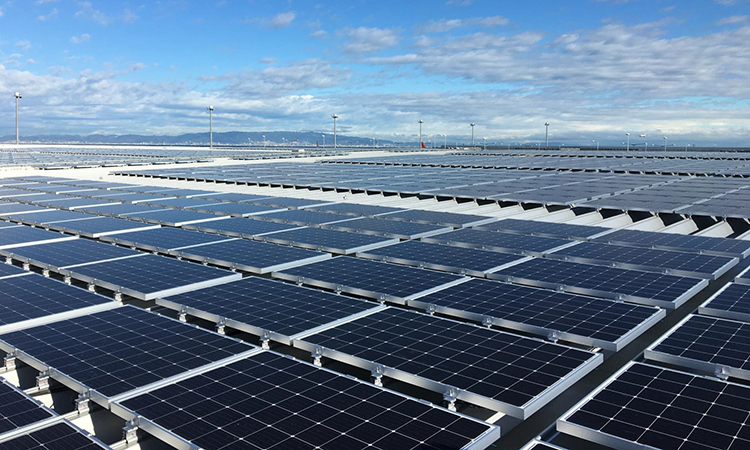 In anticipation of the hydrogen society, we have launched a project for introducing and utilising hydrogen energy in airport facilities in cooperation with stakeholders. At KIX and ITM, we have established commercial-use hydrogen stations where fuel cell vehicles (FCVs) – including cars and buses – can be filled up with hydrogen. We have also deployed five FCVs for airport operations. 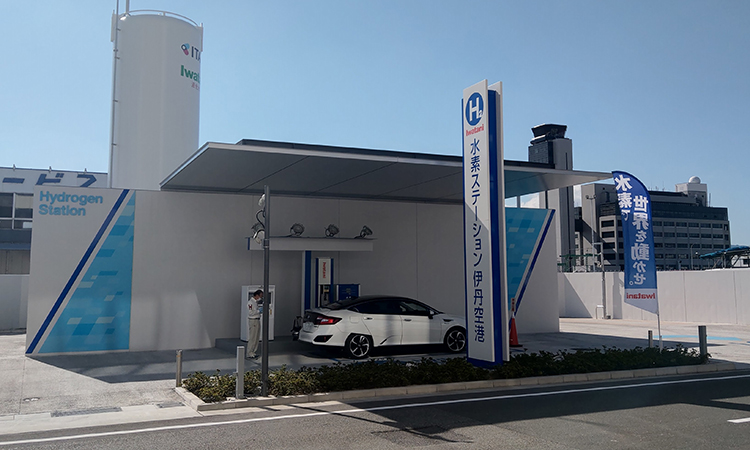 In the international cargo area at KIX, we achieved the commercialisation of fuel cell forklifts (FCFLs) in 2016, following their test operations. In 2017, we established Japan’s first hydrogen refuelling facility for industrial vehicles. We are promoting the use of hydrogen for the decarbonisation of airport operations. Currently, CKTS, a company of Kansai Airports Group that has 22 FCFLs, aims to not only reduce the environmental load, but also to improve noise, exhaust gas and odours in cargo warehouse operations.

We are working towards zero-emission airports by promoting the use of vehicles with low environmental impacts. In addition to ZEVs such as electric vehicles (EV) and FCVs, we have established a car-sharing platform to enable efficient vehicle operation across the Kansai Airports Group. Approximately 300 ZEVs are currently used across the three airports.

At KIX, the sewage water discharged from various facilities undergoes advanced treatment in the Clean Center, and the treated water is reused to preserve water resources. UKB also makes effective use of water resources by using filtered rainwater and treated water for toilet flushing and plant watering.

We are striving to reduce plastic waste to transform our airports into plastic-free and eco-friendly smart airports. Kansai Airports has set a goal of reducing single-use plastics by 25 per cent and reusing and recycling 60 per cent of plastic packaging by 2022. In April 2020, plastic shopping bags were switched to eco-friendly FSC-certified paper bags in the airport shops directly operated by Kansai Airports. When plastic bags are necessary, plastic bags containing 30 per cent of biomass materials are used. 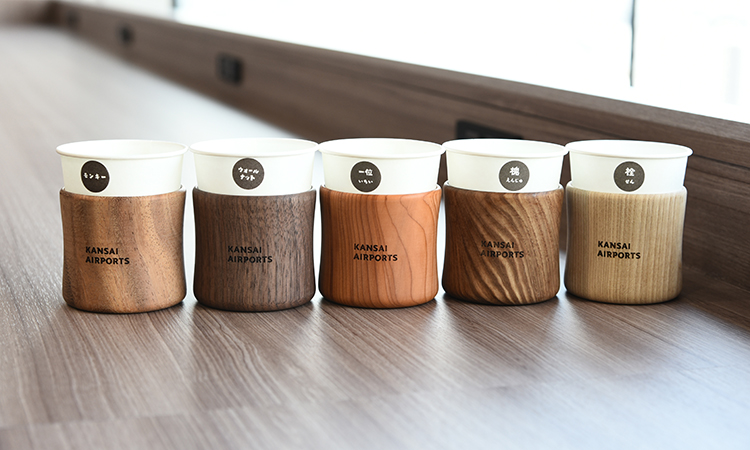 At our airports, we are monitoring aircraft noise and other environmental impacts and publishing the results. We are also striving to conserve biodiversity and create a comfortable, relaxing and refreshing environment by cultivating plants and conducting environmental surveys for identifying species at each location. 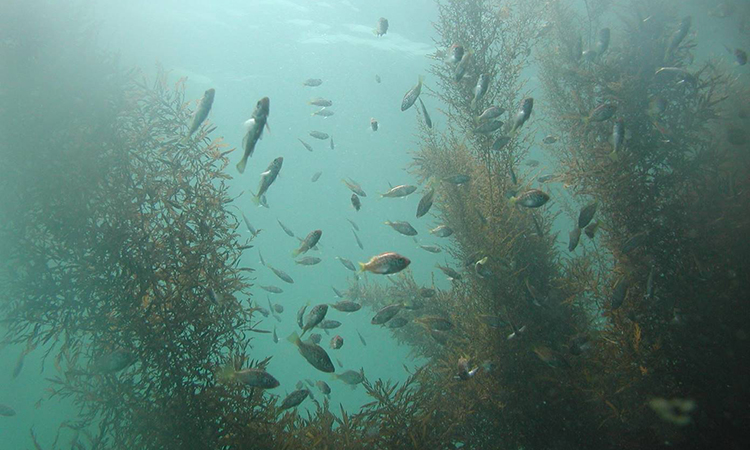 For instance, both KIX and ITM became the first airports in Japan to achieve Level 2 of the Airport Carbon Accreditation (ACA) in 2016 – ACA is a global programme organised by Airports Council International (ACI) that recognises airports’ efforts to manage and reduce their CO2 emissions with six levels of certification. In 2018, these airports further attained Level 3, while UKB also achieved the Level 2 accreditation. We will continue to work towards the upper levels of such certification.

The airport is made up of the business activities of various businesses, such as airlines, as well as airport operating companies. While they are individually working on environmental preservation from their viewpoints and positions, we have also established the Airport Environmental Promotion Council at each airport to carry out environmental activities more effectively. Through the council, we set initiatives and goals and cooperate in advancing environmental efforts. The council has also enabled us to share good practices and conduct environmental awareness events at our airports. To achieve the airports’ decarbonisation, the council’s activities are becoming increasingly important.