Nate Hahn, Executive Director of Evansville Regional Airport, discusses the airport’s new solar parking canopy – which, up until recently, was the biggest of its kind in the U.S. – and how it is helping the airport both financially and environmentally. 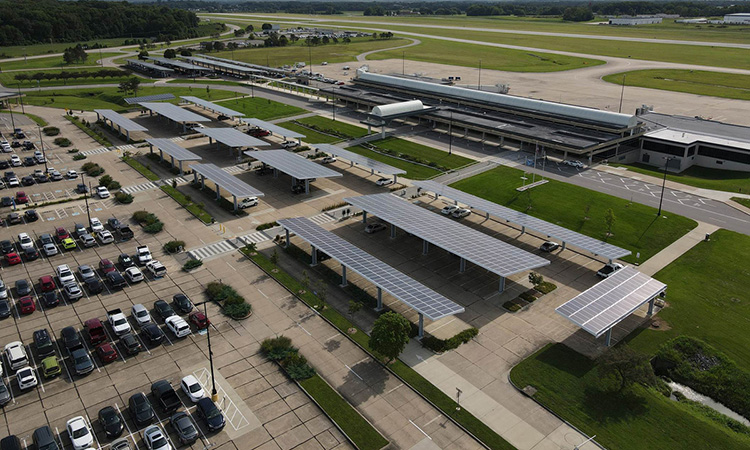 Evansville Regional Airport’s solar parking canopy is the biggest of its kind in the country. Can you tell us a bit more about it?

Evansville Regional Airport’s (EVV) solar parking canopy was the largest of its kind in the country at the time of the project’s onset and then up until quite recently. Just in the last few months, Tucson International Airport (TUS) has built onto their existing canopies, exceeding ours by a few megawatts. 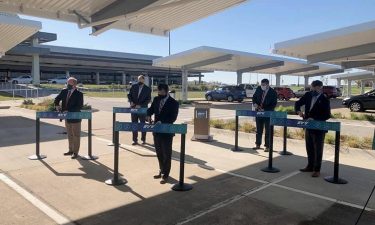 We take a lot of pride in being the second largest solar canopy in the U.S. and the largest in the Midwest. EVV is only the fifth airport with solar canopies out of more than 3,600 U.S. airports, and only 70 U.S. airports have completed solar facilities.

EVV’s solar contractor has been hearing from airports and organisations from across the nation since the start of our project – especially now, since the canopie

s are complete – asking about what Evansville has in terms of solar. We are truly leading the way in Evansville, and we take a lot of pride in being a leader in innovation and sustainability.

What led EVV Airport to develop and implement the initiative?

EVV is committed to continually moving forward to enhance passenger amenities, while keeping the environment in mind. After receiving customer feedback and requests for covered parking, EVV was able to marry that with our desire to become a more sustainable, or ‘greener’, airport. 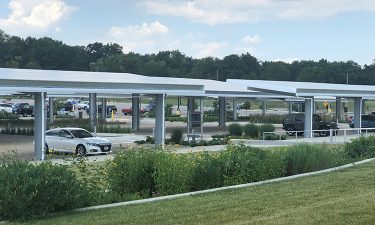 In addition, our region is transforming, and so is the airport. Through our recent terminal modernisation project, we were able to expand on our aspirations to continue providing a beautiful, innovative front door to the community, and our new solar parking canopies are another testament to that.

The return of investment on the solar project was also a driving force – the energy cost-savings were projected to reduce our energy bill by more than 50 per cent. EVV’s new solar covered parking canopies are currently generating enough energy to supply half of the terminal’s power, and this is reflected in our monthly energy bills and our reduced carbon footprint.

How is the solar parking canopy supporting the airport’s sustainability goals?

EVV is committed to continually moving forward to enhance passenger amenities, while keeping the environment in mind.

The new EVV offers numerous other sustainable passenger amenities and upgrades, pre- and post-security, as part of our recent terminal modernisation project:

Does EVV Airport have any plans to implement additional sustainable initiatives in the future?

As well as the sustainable improvements listed above, as part of our recent terminal renovation project that was completed in December 2018, the stage was set for electric vehicle charging stations in the parking lot, when the infrastructure ground-work was set to eventually add when demand presents itself. We are also currently exploring other solar opportunities, such as prospective unused airport land.

During Hahn’s tenure as EVV’s Operations Director, he was recognised for his leadership in the airport’s runway relocation project, which was completed safely, under budget and one-year ahead of the Federal Aviation Agency (FAA) deadline.

Hahn was a driving force in EVV’s terminal modernisation project that concluded in December 2018 and, effective 1 January 2019, he assumed his current role as Airport Director. Under Hahn’s leadership, EVV was named Aviation Indiana’s ‘2020 Indiana Airport of the Year’, and was the sixth U.S. airport to receive Airports Council International (ACI) World’s Global Health Accreditation in September 2020. 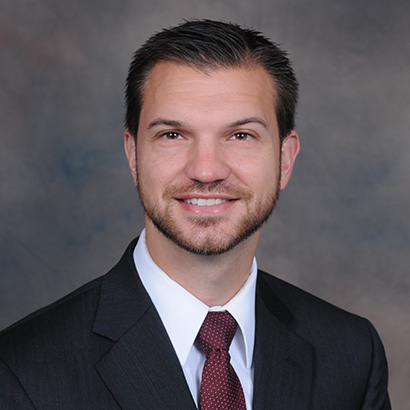