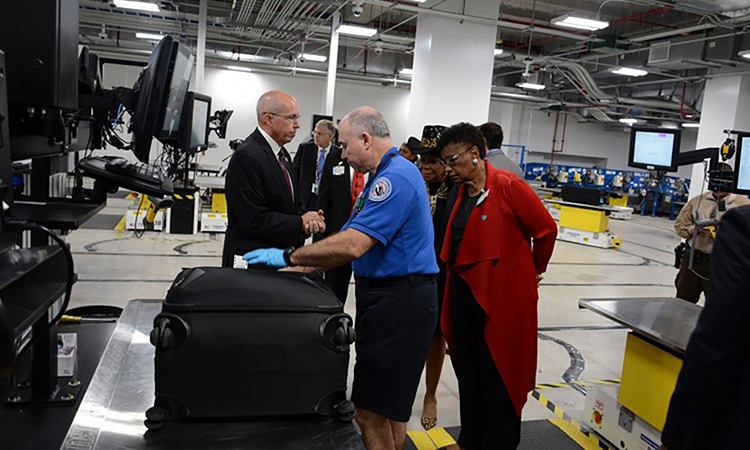 The new $324 million system, funded in part by a $101.2 million grant from the TSA, doubles the speed and efficiency of baggage screening and delivery for flights in MIA’s Central and South terminals. “This innovative system is a huge step forward in MIA’s overall capital improvement programme to modernise and streamline all phases of passenger and cargo service” said Miami-Dade County Mayor, Carlos A. Gimenez. “Installation of this new technology paves the way for quicker, smoother baggage delivery for our passengers, as well as more efficient operations for current and prospective airline partners.”

The MITs autonomously receive bags that require additional screening and deliver them via a guided floor track to 52 TSA inspection stations – eliminating lifting and pulling by TSA officers, improving tracking accuracy, reducing noise pollution and increasing the overall speed of the bag-screening process.

“The efficiency of this system allows us to perform state-of-the-art screening to keep its ever-growing population of passengers and the broader aviation system safe everyday,” said Daniel Ronan, Federal Security Director with the TSA.

The new facility, which began its fi rst phase of operations in July, can screen and transport more than 7,000 bags per hour; double the capacity of the previous two separate and outdated systems for concourses F, G, H and J. Eighteen airlines are already using the new system, with 30 more airlines scheduled to make the transition between now and mid-2020. The new baggage system is part of MIA’s $4 billion to $5 billion capital improvement programme, which will enable MIA to serve a projected 77 million travellers and more than four million tonnes of freight by the year 2040.

“We are proud to partner with the TSA on this cutting-edge facility, which is one of many enhancements coming soon as part of our airport-wide renovation and expansion,” said Lester Sola, MIA Director and CEO. “Improvements like the new baggage handling system will help MIA maintain its position as the busiest airport in Florida for international passengers.”