ICAO and IATA have officially launched new ICAO legal guidance on the management of unruly and disruptive passengers. 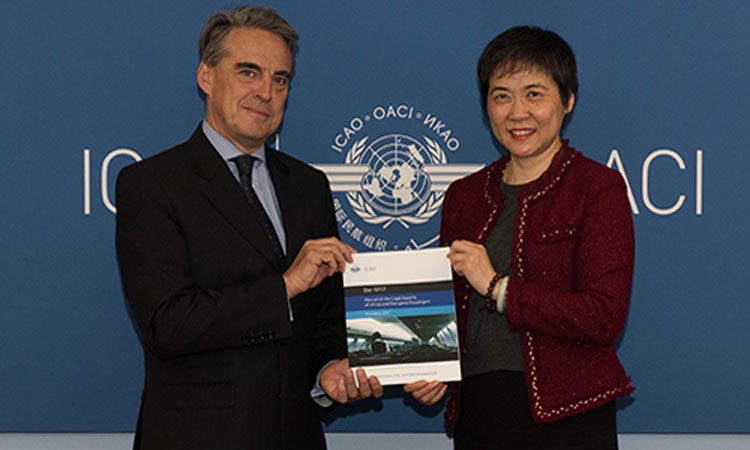 The Secretary General of ICAO, Dr. Fang Liu, and the Director General and CEO of IATA, Mr. Alexandre de Juniac, held an official launch ceremony on 7 June 2019 for the release of new ICAO Manual on the Legal Aspects of Unruly and Disruptive Passengers (Doc 10117)

The new ICAO Manual on the Legal Aspects of Unruly and Disruptive Passengers (Doc 10117) is a key result emerging from the adoption of the Protocol to Amend the Convention on Offences and Certain Other Acts Committed on Board Aircraft (Montréal Protocol of 2014).

Its chief aim is to assist national governments in legislating appropriate and better harmonised legal measures to prevent and deal with unruly and disruptive passenger incidents on international flights.

The Secretary General of ICAO, Dr Fang Liu, and the Director General and CEO of IATA, Alexandre de Juniac, held an official launch ceremony for the release of the manual on 7 June 2019.

“Unruly and disruptive passenger conduct can pose distinct threats to the safety and security of aircraft, flight crew and passengers,” commented Dr Liu. “It can also generate costly disruptions to airlines and passengers alike in situations when aircraft must be diverted to manage these incidents.”

“Enhancing safety is the shared goal for governments and airlines, and deterring unruly and disruptive behaviour on flights is key to this,” de Juniac said. “IATA welcomes [the] new ICAO guidance, which is intended to help governments address unruly passengers under their own national law. It covers many practical measures for consideration by policymakers, including ‘on-the-spot’ fines to boost enforcement action.”

The manual’s publication is also expected to encourage more states to ratify the Montréal Protocol of 2014. With the recent deposit on 5 June 2019 of the instrument of ratification by Uruguay, the Protocol requires two more countries to formalise their ratification before its official entry into force.