Gateway to Scotland expansion is officially opened by First Minister

Part of a £200 million investment programme, the expansion enhances the airport’s connectivity options and will support passenger growth to 20 million passengers. 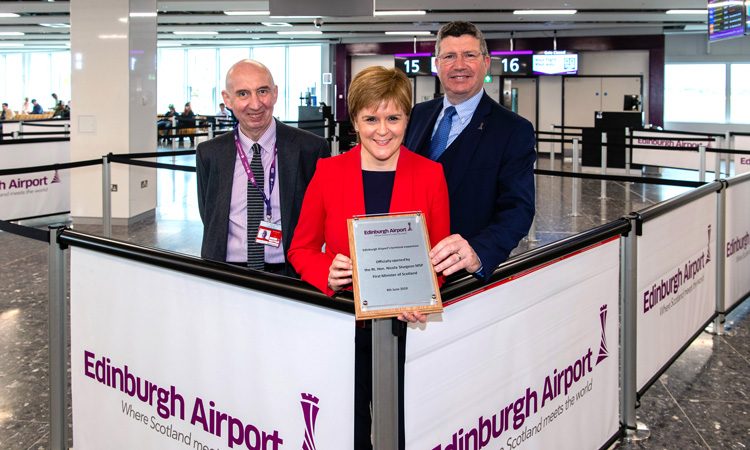 Nicola Sturgeon, First Minister of Scotland, has officially opened Edinburgh Airport’s £75 million terminal expansion, the biggest project in a generation at the airport.

This is the start of a larger programme of investment in key terminal and airfield facilities over the next five years, with almost £300 million being spent on a new baggage system, more stands, improved check-in facilities and a new access road.

Sturgeon received a tour of the terminal expansion from Gordon Dewar, the airport’s Chief Executive. She also spoke to staff and passengers in the Special Assistance seating area which was designed with the help of end users.

She said: “I am delighted to open this terminal expansion, further establishing Edinburgh Airport as a gateway to Scotland from the rest of the UK and internationally.

“Edinburgh Airport not only supports our business and tourism sectors but employs 700 people directly and 7,000 through partner businesses – I was particularly pleased to meet engineering apprentices who are learning their trade in a fast-paced environment such as aviation.

“This £75 million investment will future-proof the airport for continued growth. As an outward-looking nation, it is more important than ever that we enhance connectivity with our European partners and with the rest of the world.”

“More than 14 million people come through our doors every year and we have invested to accommodate even more as more and more people choose air travel to come to Scotland or visit the world around us. We want that experience to be as positive as possible and this expansion provides greater options, including the ability to achieve greater connectivity.

“I’m delighted to be able to show the First Minister what we have delivered and to demonstrate the commitment and dedication that our staff and everyone involved in the construction of this expansion has. I can think of no better reward than having the First Minister here to celebrate their work.”