As part of the new terminal, Pier G is scheduled for completion in 2021, with capacity for up to five million passengers a year. The main building with Piers H and J will begin operating by 2023, increasing T3’s total capacity to 21 million passengers. 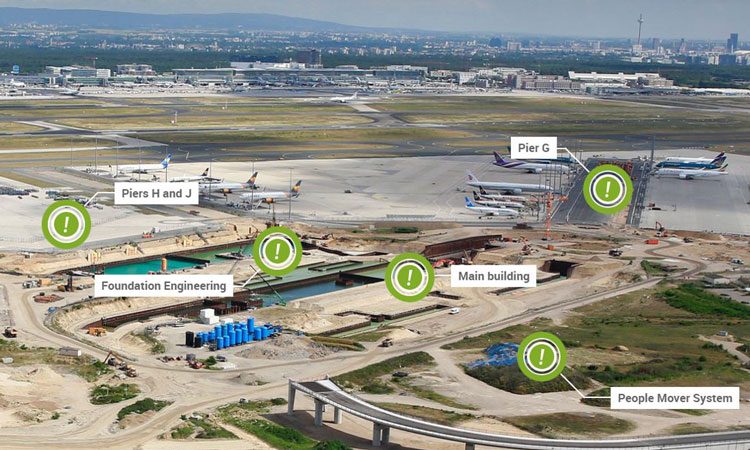 Numerous guests and construction workers attended the ceremony, which marked the start of above-ground construction. To remind future generations of this milestone, a group of participants filled and bricked in a time capsule. They included Dr. Thomas Schäfer, Minister of Finance of the German state of Hesse, and architect Prof. Christoph Mäckler, as well as Fraport AG’s Executive Board Chairman, Dr. Stefan Schulte, and its Supervisory Board Chairman, Karlheinz Weimar. During periods of peak activity, up to 5,000 construction workers a day and around 75 tower cranes will be deployed at the Terminal 3 construction site.

During the ceremony, Fraport CEO Schulte, stated: “We are building the future with Terminal 3 – for Frankfurt Airport, the entire Rhine-Main region and far beyond. By employing state-of-the-art technology and intelligent processes to create an outstanding passenger experience, we are meeting the promise inherent in our slogan, ‘Gute Reise! We make it happen’. With the new terminal, we are adding sufficient capacity for about 21 million more travellers annually by the year 2023. Frankfurt is already an international leader in terms of connectivity. No other aviation hub in the world offers more destinations to business or leisure travellers than Frankfurt Airport. And Terminal 3 will further strengthen Germany’s most important gateway to the world.”

Finance Minister Schäfer, said: “We aren’t just laying the cornerstone for a new airport building. We are also establishing the basis for more jobs, more opportunities, and greater economic vitality. The construction of Terminal 3 is an important step for strengthening the airport’s competitiveness and therefore also that of the state of Hesse as a centre of economic activity. Over the next few years, Fraport AG will invest up to four billion euros in the project. This has the potential to create many new jobs while increasing the importance of Frankfurt Airport as Germany’s largest place of employment. But even though the airport is the powerhouse of Hesse’s economy, this doesn’t mean that it has free rein. The state government will continue to insist that the aviation industry uphold its strong commitment to reducing noise and environmental burdens.”

Terminal 3’s Pier G, with capacity for up to five million passengers, will be completed by 2021 in the southern part of Frankfurt Airport. This modern facility will later be integrated into Terminal 3’s premium product. The plans call for the main terminal building, along with Piers H and J, to be completed in 2023. As a result, the airport will then be able to handle up to 21 million more passengers than now. There will be an option to later add a Pier K, thus increasing the new terminal’s total capacity to 25 million air travellers.

Fraport Supervisory Board Chairman Weimar added: “Frankfurt Airport is a premium air traffic hub. This is obvious from the growing number of travellers wishing to fly from and via Frankfurt. In view of the buoyant growth in passenger volumes, it is high time to enlarge our capacity. So it’s good news that one pier can be completed ahead of the rest. Pier G will begin operating and providing additional capacity as early as 2021. This leaves no doubt that we were right to opt for an architectural design that could be flexibly adjusted as required.”

Architect Christoph Mäckler explained the terminal’s design as follows: “What passengers want before and after flying is, more than anything else, rest and relaxation. This was an essential leitmotif for designing Terminal 3, alongside maximising the technical and functional flexibility of the building complex. The light-flooded interior spaces feature high-quality materials in warm natural hues to evoke a pleasant ambiance that invites passengers to relax and stay a while. In this respect, the new terminal will be the first of a new generation worldwide.”

Fraport Ausbau Süd GmbH, a wholly-owned subsidiary of Fraport AG, is responsible for managing, supervising and monitoring the construction project. The approved budget amounts to between €3.5-4 billion, Fraport’s largest single investment at Frankfurt Airport. Some 500 individual contracts are being awarded for a wide variety of tasks, which is benefiting a large number of small and mid-sized construction companies, including in the Frankfurt region.