Chicago Department of Aviation has announced a new O’Hare travel plaza which is set to open in November 2019. 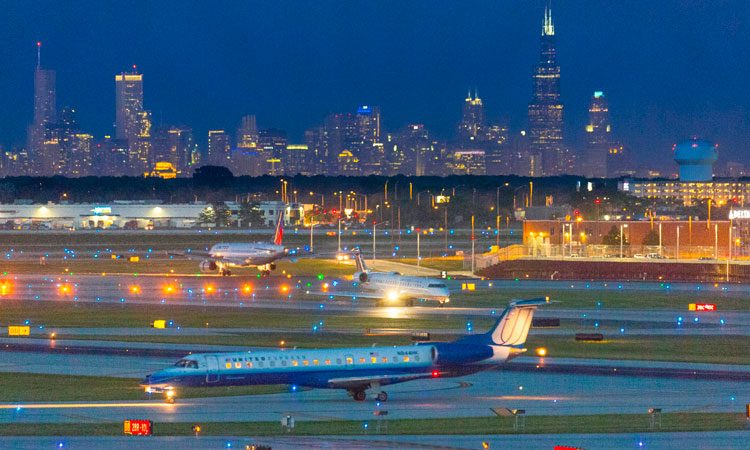 The Chicago Department of Aviation (CDA) has announced the upcoming opening of its first-ever publicly accessible fuel station at O’Hare International Airport. This travel plaza will provide airport users and the surrounding communities access to an increased selection of sustainable and traditional fuel sources.

Located at Higgins Road and Patton Drive, this facility is slated to open in November 2019. It will provide a range of alternative fuelling options, including electric vehicle charging stations, and will also include a drive-through restaurant and convenience store. The green features of this project include solar power generation and LEED certification – furthering the CDA’s commitment to sustainability throughout new facilities.

CDA Commissioner, Jamie L. Rhee, said: “The Chicago Department of Aviation is thrilled to break ground on the O’Hare Travel Plaza which is setting the standard for 21st century fuel stations with its sustainable design and impressive selection of alternative fuel sources. This forward-thinking multi-fuel station demonstrates the CDA’s ongoing efforts to implement sustainability wherever we can as we continue to build a better, more modern airport for our passengers and the surrounding community.”

The new O’Hare travel plaza incorporates many sustainable features to help reduce the impact on the environment while serving airport visitors, transportation providers, commercial vehicles, as well as fleets frequenting the nearby Northeast Cargo development. While a standard gas station typically dedicates 15-20 per cent of its pumps to alternative fuels, this travel plaza will dedicate 60 per cent to alternative fuel sources, including E85 ethanol fuel and electric vehicle (EV) charging stations. This new facility will nearly double the current number of EV charging positions at O’Hare to a total of 41.

The canopy over the fuel pumps will house 150 solar panels. The 330 watt panels will generate approximately 55,000 kw/h a year, creating an estimated $100,000 in energy savings annually. These panels will provide in excess of 50 per cent of the average electric consumption of the retail building on site.

Armand Keurian, PMG’s Director of Development, said: “Petroleum Marketing Group was proud to partner with the CDA to develop a travel plaza that produces next-generation energy from renewable sources. We are happy to lead the way in creating a service station that will assist in reducing the carbon footprint.”

The O’Hare Chicago Travel Plaza will include Mobil fuel and services, 7-Eleven and a quick service restaurant brand to be announced soon. Overall, the $6 million development will create 120-140 construction jobs and a dozen permanent jobs. Petroleum Marketing Group (PMG), which will develop and manage the multi-fuel station and its tenants, was selected as part of a 2013 request for proposals.

This project will meet minority- and women-owned business participation goals of 25 per cent MBE/five per cent WBE for construction, and a 20 per cent ACDBE participation plan once operational. In order to meet these goals, PMG attended four construction-related career fairs and is committed to participating in community hiring fairs held citywide by the CDA closer to the facility’s fall opening.

As with all on-airport projects at O’Hare, this project will be built in accordance with the CDA’s Sustainable Airport Manual (SAM) guidelines. The CDA was the first in the U.S. to develop a SAM, establishing guidelines for sustainable design and construction that are used by airports around the world. As O’Hare prepares for its historic $8.5 billion expansion that will transform the airport from kerb to gate, the CDA is updating its SAM to expand its focus on sustainability strategies from the airfield and everyday operations to the development of terminal and commercial use facilities. SAM 4.0 will incorporate universal design goals and global partner feedback on the creation of construction, operations, and maintenance guidelines for all proposed terminal expansion projects, including the new O’Hare Global Terminal.