ACI Europe has released its air traffic report for September and Q3 2018; the report is the only air transport report including all types of civil aviation passenger flights: full service, low-cost and charter. 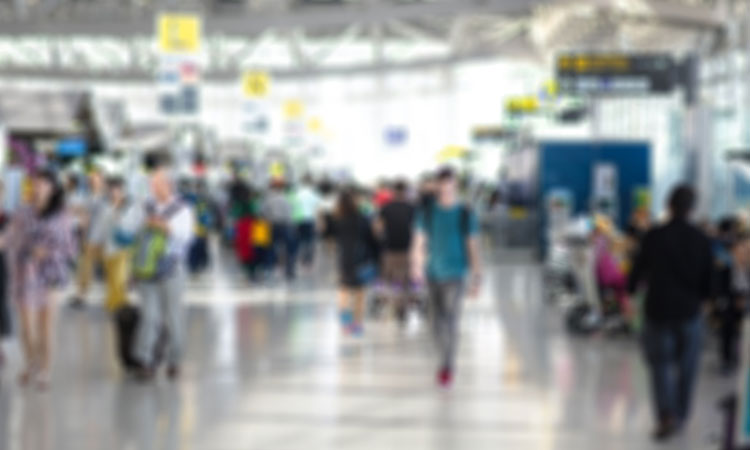 The report reveals that during the third quarter of this year, passenger traffic growth at Europe’s airports moderated to +5 per cent – compared to +6 per cent in Q2 and +8.9 per cent in Q1.

Passenger traffic growth in the EU market stood at +4.6 per cent in Q3 – remaining consistently stable over the three-month period. Airports in Finland, the Baltic States, Poland, the Czech Republic, Slovakia Hungary, Malta and Luxembourg registered double-digit growth. Conversely, airports in Sweden, the UK and the Netherlands posted the weakest results.

While passenger traffic in the non-EU market stood at +6.5 per cent in Q3, the growth pace slowed over the three-month period from +6.8 per cent in July to +5.6 per cent in September. This was mainly due to Turkish airports decelerating and almost coming to a standstill in September (+0.4 per cent) – as the country’s difficult economic situation is impacting demand for air travel. Airports in Russia, Ukraine, Montenegro, Albania, FYROM and Iceland posted double-digit growth.

Smaller airports (below 5 mppa) outperformed the European average in Q3, with their passenger traffic increasing by +6.7 per cent. Meanwhile, growth at the ‘Majors’ (top 5 European airports) capped at +3.3 per cent. Frankfurt (+7.3 per cent – N.3) led the league, followed by Paris-CDG (+4.5 per cent – N.2). Istanbul Ataturk (plus one per cent – N.5) posted the weakest performance, followed by capacity constrained Amsterdam Schiphol (+1.1 per cent – N.4) and London Heathrow (+2.4 per cent – N.1).

Freight traffic during Q3 was up +1.4 per cent, while aircraft movements (an indicator of new airline capacity in the market) were up +3.4 per cent. 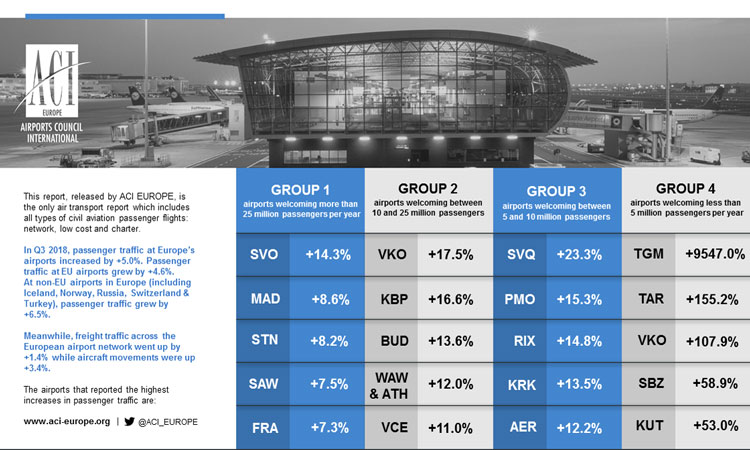 Olivier Jankovec, Director General of ACI Europe said “The peak summer months show that the momentum in traffic growth is robust, but diminishing. Airport capacity issues, industrial unrest, rising oil prices and airline consolidation are putting the brakes on more gains. Aviation taxes and economic slowdowns have also come to take their toll – as evidenced by stalling air traffic growth in Sweden and Turkey. Looking at the coming months, Brexit risks have somewhat receded following yesterday’s EC announcement of its contingency measures in case negotiations with the UK fail. The fact that the EC has formally clarified that it will propose measures to ensure undisrupted air connectivity between the EU27 and the UK after March 2019 is indeed a relief. With the UK having already taken a similar position, this means that consumers can now have confidence over existing and future bookings for travel between the EU27 and the UK next year.”

He added “However, the EC announcement makes it clear that these contingency measures would only apply until December 2019. That still leaves a big question mark as to what would happen beyond that date if the no-deal scenario materialises.”

During September, passenger traffic at European airports increased by five per cent – with the EU market growing by +4.9 per cent and the non-EU one by +5.6 per cent.

In September, freight traffic at European airports increased by 1.4 per cent and aircraft movements by 2.9 per cent.