Tougher penalties for people who target vehicles including train, planes, cars and boats with lasers will now result in jail time, and/or a fine. 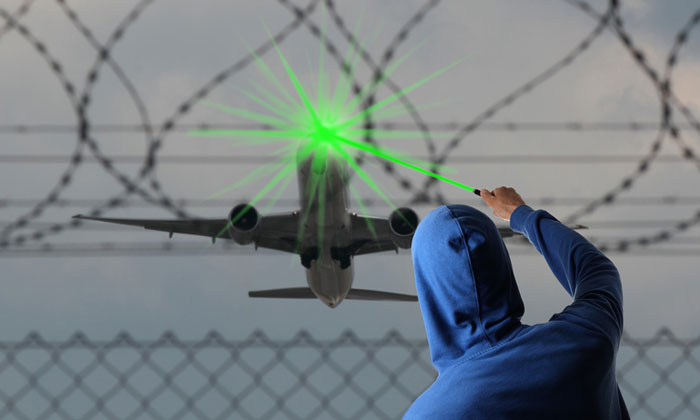 The Laser Misuse (Vehicles) Act means that offenders will face much tougher penalties of up to five years in prison, an unlimited fine or both for shining a laser at an aircraft.

And police and law enforcement now have more powers to catch and prosecute offenders as there is no longer a need to prove intention to endanger a vehicle.

Last month, ahead of the laws coming into force, BALPA Flight Safety Specialist, Steve Landells, said: “Shining a laser at an aircraft can have serious, potentially fatal, consequences and it is right that people who misuse them should face tough penalties for endangering other people’s lives.”

The tough new legislation was introduced in December and latest figures show the number of laser aviation incidents fell in March to the lowest levels since 2009.

Baroness Sugg, Aviation Minister, said: “Lasers, used recklessly, can have very serious, potentially fatal consequences. This Government has toughened up the law to crack down on this dangerous behaviour. These new laws offer greater protection for operators and passengers alike against irresponsible and reckless laser use.”

Head of Flight Safety at BALPA, Dr Rob Hunter said: “The public needs to recognise that lasers are not toys and shining one at an aircraft endangers all those on board and anyone on the ground. This legislation removes the need for police officers to establish proof of intention to endanger so people will find it much harder to hide behind the claim they ‘did it by accident’.

“If you have bought a laser for your kids or have one that you don’t really need, we suggest you take the batteries out and throw it away. It’s not worth you, or someone close to you, getting a criminal record for the sake of what is mistakenly believed to be a toy.”