Public desire to have targets cut is in sharp contrast with the increased queues at the border in UK airports, as detailed in a report released today by the AOA. 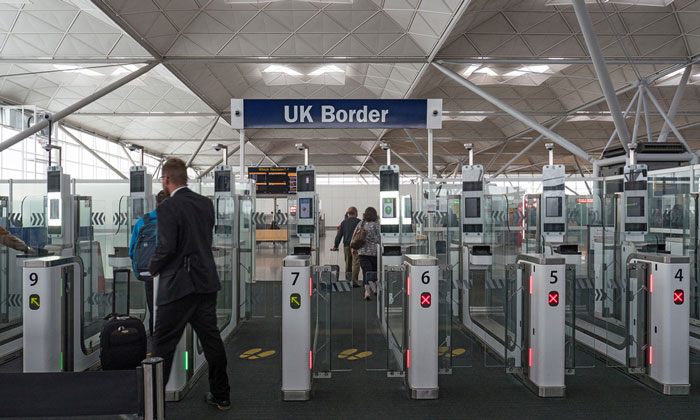 CHANGE BREWING: Brexit will alter how passengers are processed at the border

As the UK prepares to travel to their summer holidays, the public is calling for Border Force’s waiting time targets to be halved, a survey by the Airport Operators Association (AOA) has shown. This is in sharp contrast with the increased queues at the border in UK airports, as detailed in a report released today [Tuesday July 3, 2018] by the AOA.

The survey, conducted by ComRes, showed that Britons expect UK and EEA passport holders to wait no more than 12 minutes at passport control in airports. They find 25 minutes an acceptable wait time for non-EEA citizens. This is in sharp contrast to the targets that Border Force works to, which set a maximum waiting time of 25 minutes (95 per cent of the time) for UK and EEA citizens and 45 minutes for citizens of all other nationalities.

To make matters worse for the travelling public, an AOA report on the challenges at the border released today shows that Border Force struggles to meet those targets as budgets and staff numbers have reduced in recent years: passenger numbers have grown by nearly one quarter between 2012/13 and 2016/17, while Border Force’s budget has declined by 8.5 per cent. That has meant that particularly during peak travel seasons, such as the summer holidays, passengers are waiting longer more often.

For example, in July 2017 at Heathrow Airport, there were almost 2,000 occasions during which queues of non-EEA nationals were longer than 45 minutes. Queues of two hours or more are now a “once a month” occurrence for the airport.

At London Gatwick Airport, even as one of the better performing airports, the longest queue, in September 2017, was 108 minutes. The ComRes survey showed that nearly ten per cent of Brits who travelled back to the UK in the last year reported waiting for more than half an hour.

The report reveals that these poor passenger experiences often hidden by Border Force’s approach to measurement, which focuses on average queue times. This means the monster queues many passengers experience are balanced out by quieter times – suggesting performance is better than it is. However, the passengers who’ve experienced the long queues in border halls with closed ePassport gates and empty passport control desks, will have reached a very different conclusion and airport surveys show that the majority of complaints are about queuing times.

Chief Executive of the AOA, Karen Dee said: “As we prepare to leave the EU, getting the message out there that the UK is open for business is vital. The welcome we give to the world at the UK border is a crucial part of that.

“The UK is currently not getting this right: visitors and returning UK residents regularly face long queues.

“Not only do these queues breach Border Force’s own waiting time targets, but it is clear those targets are no longer fit for purpose. Passengers believe that a queue time of only half the current maximum waiting time would be acceptable.

“To deliver the service passengers expect but also deliver the secure but welcoming border that is vital for the success of the Government’s Global Britain ambitions, Border Force must have the resources it needs.

“Airports stand ready to play their part and have, for the last few years, been calling on Government to work with industry to develop a joint long-term plan on how to meet growing passenger numbers and expectations. We hope that the Government will take up that open invitation as part of its planned Aviation Strategy.”