Lagging infrastructure means Mexico is not reaching its potential in the aviation market, a study has found, meaning it could miss out on billions of dollars in the coming years. 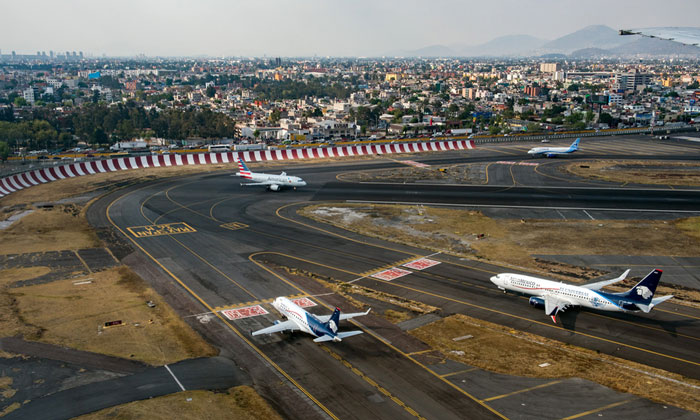 BUSY: The airport is running well over capacity

The International Air Transport Association (IATA) has said that current aviation infrastructure in Mexico’s capital is “bursting at the seams” as it reiterated its support for a new airport in the city.

Construction of the new international airport in Mexico City was launched in 2014 by President Enrique Peña Nieto to replace Benito Juárez International Airport.

“The current airport is bursting at the seams. It serves 47 million passengers, almost 50 per cent over its design capacity of 32 million. A new airport is vital to enable Mexico City to benefit more fully from its ideal geographic position linking North America and Latin America,” said Peter Cerda, IATA’s Regional Vice President for the Americas.

Aviation already makes an enormous contribution to Mexico’s economy, supporting 1 million jobs and 2.9 per cent of GDP, including the economic contribution of foreign tourists arriving by air.

But lack of infrastructure capacity at its capital city is degrading the country’s ability to capture an even larger share of the benefits of aviation connectivity, regionally and globally, according to a new IATA study.

The study shows that for a country of its size, Mexico underperforms in terms of its integration with the global air transport network. This means that aviation is not fully delivering the benefits that it could with sufficient infrastructure. In this regard, Mexico trails countries with much smaller home markets, including Panama, the Dominican Republic, Colombia, Peru, and Chile.

The IATA study also identifies the cost of missed opportunities if infrastructure development does not keep pace with demand for aviation connectivity. If the new airport is not built, it could mean 20 million fewer passengers per year by 2035. This translates into a negative impact of up to $20 billion in future GDP contribution and up to 200,000 fewer jobs in Mexico supported by aviation in 2035.

“With its enormous local population, strong attractions for business and tourism, and geographic advantages, Mexico City has the ability to play a much bigger role on the world stage. But for that to happen, aviation infrastructure needs to be adequate and affordable, which is why it is absolutely vital that the new Mexico City Airport is built as planned,” said Mr Cerda.

This is based on a qualitative measure of the number and economic importance of destinations served from the main airports in a country, the frequency of service to each destination and the number of forward connections available from each destination, weighted by the GDP of each country