SITA’s Director of Emerging Technologies will speak about his company’s research into mixed reality at the International Air Transport Association’s (IATA) summit on virtual and augmented reality in Switzerland. 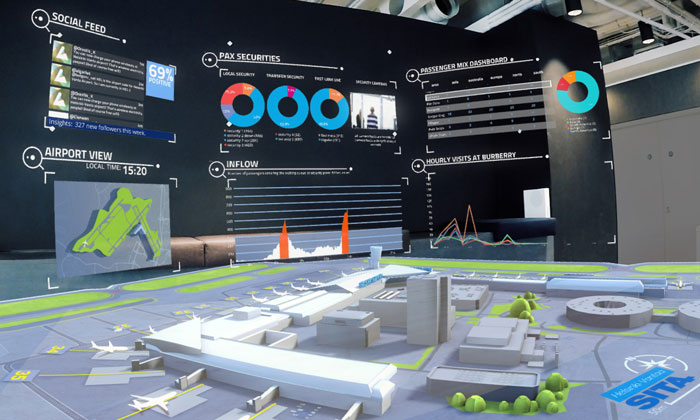 SITA’s Director of Emerging Technologies will speak about his company’s research into mixed reality at the International Air Transport Association’s (IATA) summit on virtual and augmented reality in Switzerland.

Kevin O’Sullivan will draw on SITA’s work with Helsinki Airport, a collaboration which won two innovation awards, carried out last year. SITA Lab, the research arm of the air transport IT provider, used Microsoft HoloLens to analyse and manage airport operations in a mixed reality environment.

HoloLens is the world’s first self-contained holographic computer, enabling users to engage with digital content and interact with holograms in the world around them. It runs Windows 10, and enables the blending of the physical and digital worlds in ways that were previously impossible. SITA worked with Helsinki Airport to use HoloLens to reproduce the airport operational control centre (AOCC) in this mixed reality environment.

For this project SITA Lab used a feed from SITA’s Day of Operations technology, which is used by Helsinki Airport, and presented a new way to visualise and interact with the airport’s operational data including aircraft movement, passenger movement and retail analytics.

Wearing the HoloLens, the operators had a set of screens meshed into a 3D view of the airport allowing them to correlate events from the data dashboards with an immersive real-time model of the airport.

This new way of looking at the world can provide new insights into how the airport is functioning. HoloLens also opens the possibility of being able to access the AOCC environment from any location, on or offsite, allowing experts to provide input to situations remotely.

Following the release of the early results, Jim Peters, SITA CTO and head of SITA Lab, said: “Mixed reality, which combines augmented and virtual reality, is more than a new interface, it is a new way of looking at the world and allows things to be done in a new way. It enables digital and physical data to exist together.

“Our early research shows that there are potential uses for airlines and airports – for operations, maintenance and training. We need to learn how to interact in this new environment. In the same way that we moved from computers to smartphones and voice recognition, now we can go beyond the screen.”

Greg Jones, MD, Worldwide Hospitality & Travel, Microsoft Corporation, said: “HoloLens is now being used across various enterprises from healthcare to engineering. SITA’s work is an example of how to extend HoloLens capabilities to manage the complexity of data and decision-making in an airport environment.  It shows how this new technology can be harnessed for the air transport industry and add value in areas from training to complex operational management.”

SITA Lab’s early research results show that unlike virtual reality, the mixed reality experience tends not to make people feel disorientated or nauseous. The HoloLens device itself has proven easy to learn and has a good battery life and doesn’t suffer from over-heating issues.

Mr Peters, added: “Mixed Reality hits a sweet spot of having an experience that is fully immersive for the user, but also keeps that person in the real world. The user can interact with both and avoids the disorientation or discomfort of fully immersive virtual reality.  There are benefits to having multiple people using the headset and simultaneously interacting with the same virtual display. This could be really useful for scenario planning exercises.”