The architecture firm behind the much-anticipated megabuild in Beijing set to open next year has been awarded a contract for India’s biggest airport project. 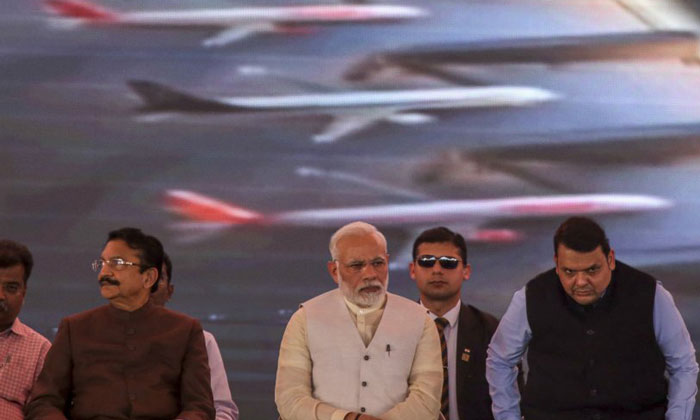 WE CAN NOT AFFORD TO LAG: Prime Minister Modi at the ground-breaking ceremony

Zaha Hadid Architects (ZHA) has been appointed as the architect of the new Navi Mumbai International Airport (NMIA) following an international design competition.

The appointment was made by GVK, the operators of Mumbai’s Chhatrapati Shivaji International Airport (CSI), increasing demand on which has spurred the need for a new airport.

ZHA will be responsible for the over-all long term design and building of NMIA’s Terminal 1, air traffic control tower and associated landside access.

The airport has a total planned capacity of more than 60 million passengers per year and will be built in Navi Mumbai, across Mumbai Harbour. It will be connected to the city via the planned Mumbai Trans Harbour Link and rail links with local and national networks.

Cristiano Ceccato, ZHA Project Director, said: “We are very proud to have been awarded the Navi Mumbai International Airport that will be a much needed addition to Mumbai’s infrastructure and an additional gateway to India. Our ambition is for the design to speak to India’s future, while celebrating its present and honouring its past.”

Mouzhan Majidi, ZHA CEO, said: “Navi Mumbai International Airport is a transformative and unique project and we look forward to our partnership with GVK, working together to develop NMIA into one of the most sustainable passenger-centric airports in the world, and the opportunity to contribute to India’s continued growth and success.”

The foundation stone for the new airport was laid by the Indian Prime Minister Narendra Modi on February 18, with the project placed on a fast-track programme of completion.

Prime Minister Modi said at the foundation stone ceremony: “The aviation sector worldwide is moving very fast, we cannot afford to lag. For 70 years, there was no aviation policy in India, which we have now implemented to provide all-round connectivity.”

Demand for air travel in the nation makes the India’s aviation sector among the fastest growing in the world. Its airlines currently operate almost 450 passenger plane, with 900 additional aircraft ordered for delivery in the coming years, representing more than 200 per cent growth.